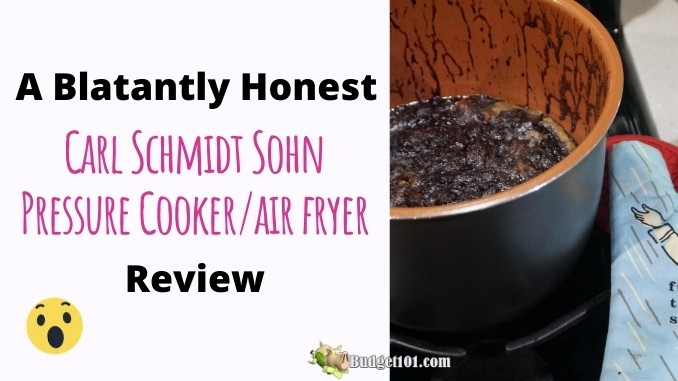 I’m a traditional cook.. that is to say, when a new gadget comes out, it takes me a while before I’m sold on trying one or buying one. I like to see what other people’s experiences are with it first. Maybe it’s my frugality seeping through, maybe it’s my limited kitchen space. In any case, I was intrigued by this Carl Schmidt Sohn Pressure Cooker/Air Fryer combo, and when the company contacted me asking if I’d review it, I said yes. 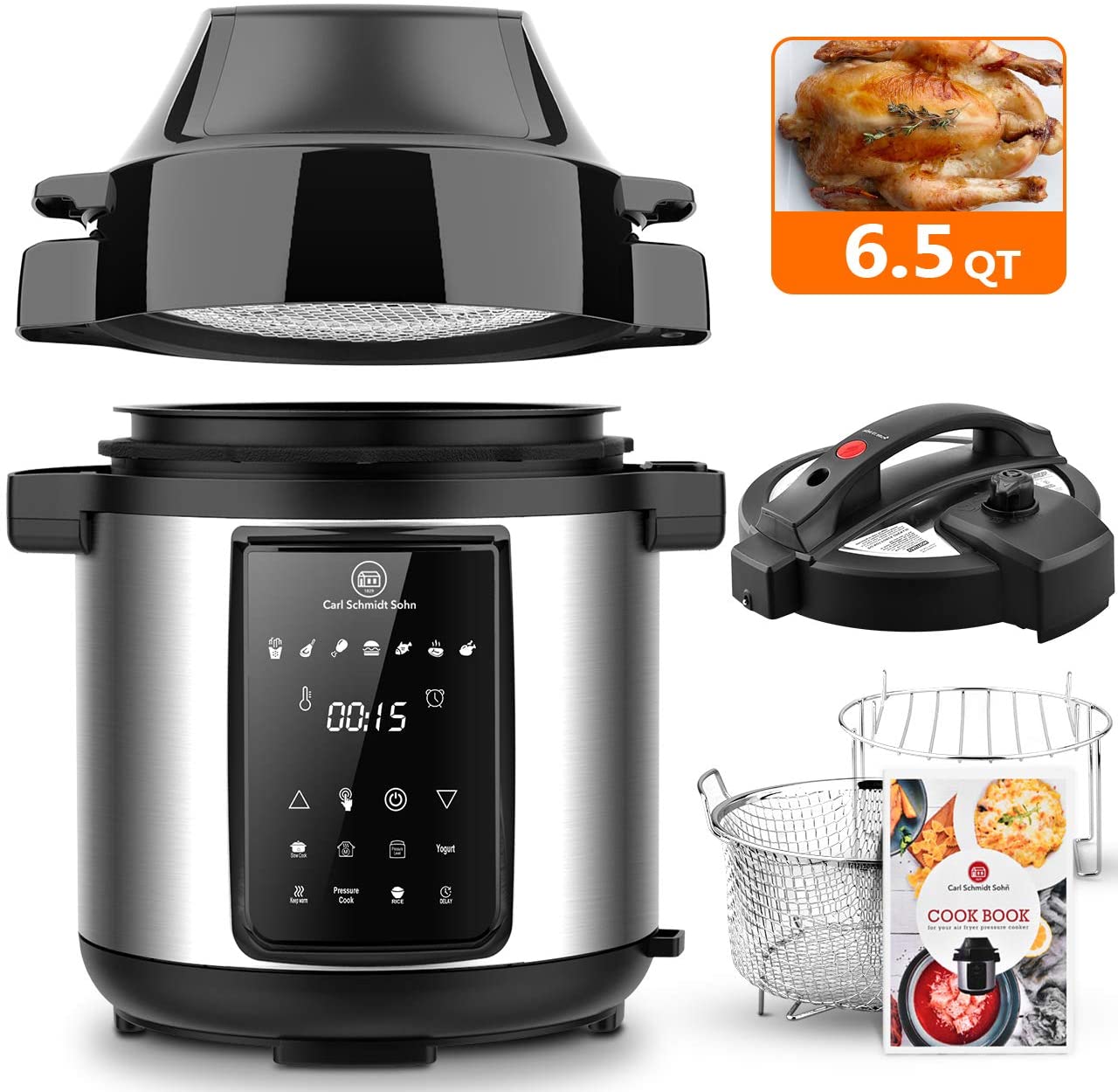 Full disclosure, I have a pressure cooker, well, technically I have two. The old fashioned kind that you use on a stovetop for canning and a digital pressure cooker that sets on the countertop. Side note, I did recently learn that you can’t use it outside while camping, because it overheats and shuts down completely, but that’s a whole other story.

I figured what better way to test the unit than to use a recipe that’s printed in the book that arrives with the unit itself. I chose the berry upside-down cake recipe. This is what it looks like in their recipe book.

It looked delicious, even though the photo was clearly of a strawberry upside-down cake, and strawberries weren’t even an ingredient in the recipe! 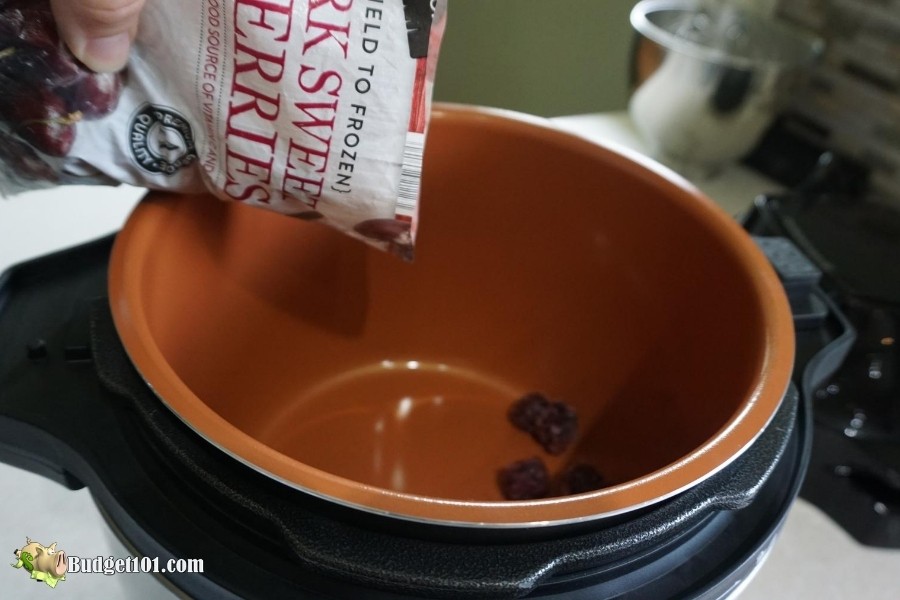 Then add 12 ounces of frozen blueberries. 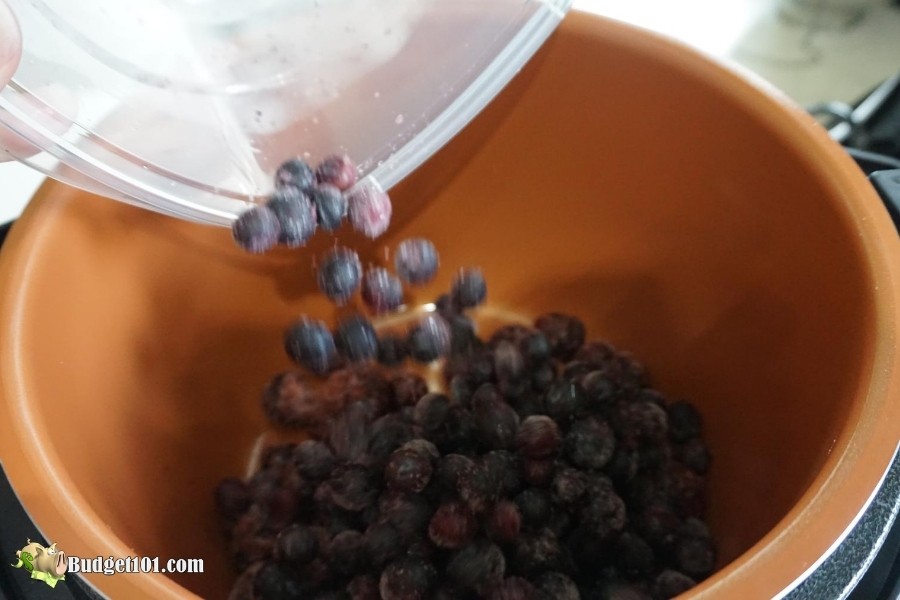 Next, add sugar, butter, lemon juice, and cornstarch to the berries. 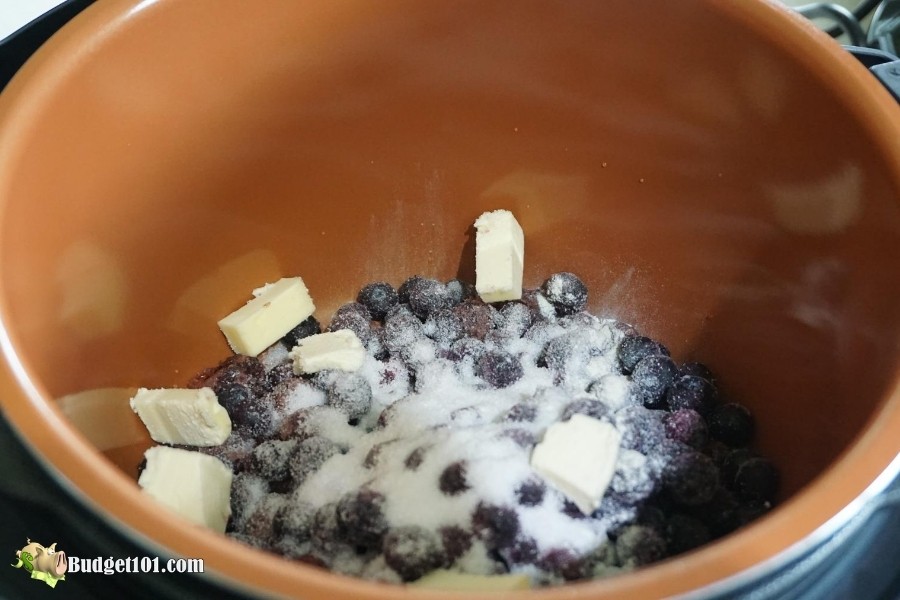 Seat the pressure cooker cover on the pot over the berries, press the start button, then the pressure cook button, set it to low, and using the up and down arrows, set the timer for five minutes.

Then press the start button again to actually turn it on. I won’t lie, I had to unplug it and reset it to start over twice to get it to actually set the time correctly and start the 5 minutes of pressure cooking. 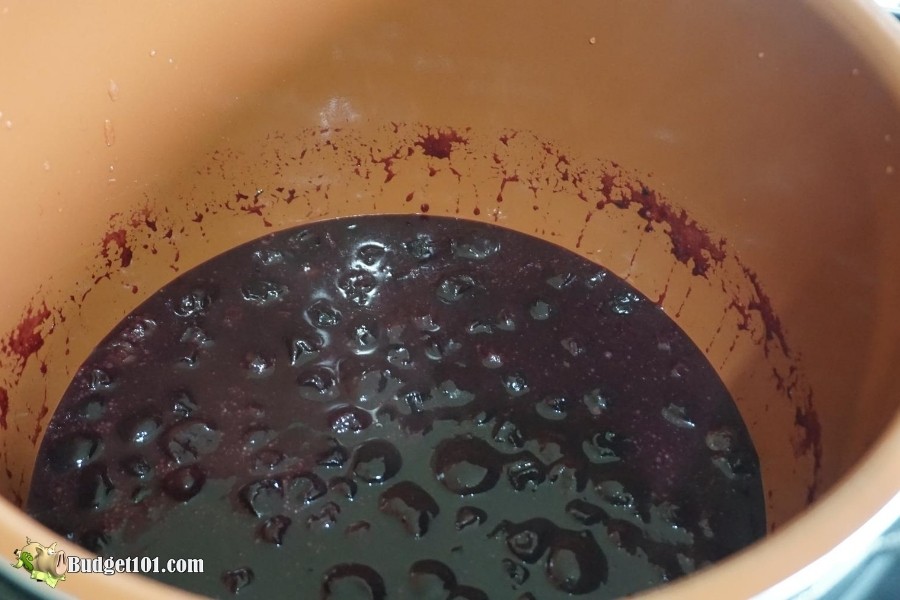 Then it says to restart by pressing the start button, then press the Slow Cook button. Allow the sauce to simmer for about 10 minutes. It doesn’t say with the lid on or off, So I took the lid off. A light came on saying “lid”. Okay, gotcha, I put the lid back on. I tried to set the timer for 10 minutes.

That’s not an option in the slow-cooker setting. It starts at 30 minutes and goes up to seven(?), maybe nine hours (damn, I don’t remember now!). Anyway, I set it for 30 minutes on the pot, the lowest setting available, but then set my kitchen timer for 10 minutes, so I’d remember to come back and tend to it yet again. 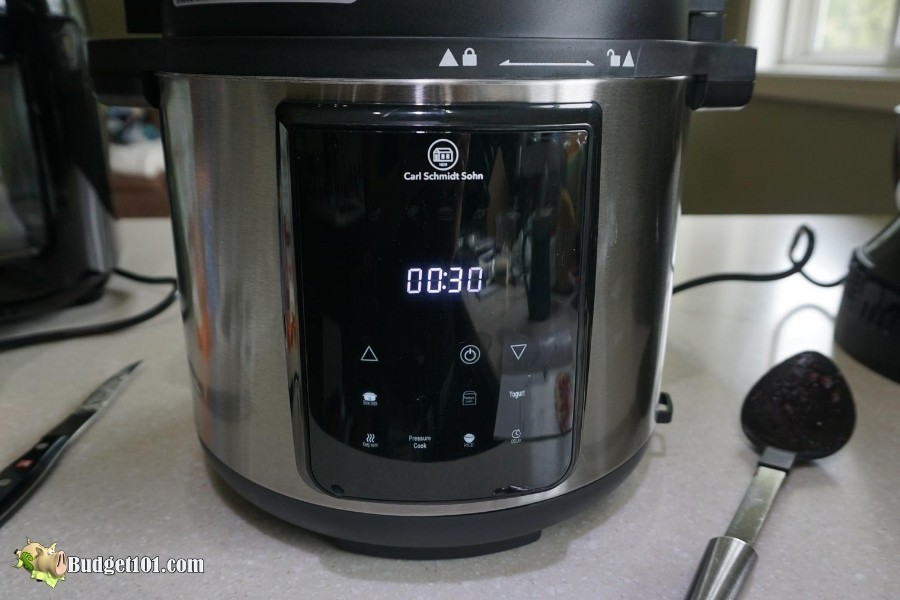 So, ten minutes pass and I open the pot and this is the result. Now the recipe says to remove the pot from the cooker and place it on a heat-safe surface to cool for fifteen minutes. Christ, this recipe is taking forever and I’m already sick of making it. 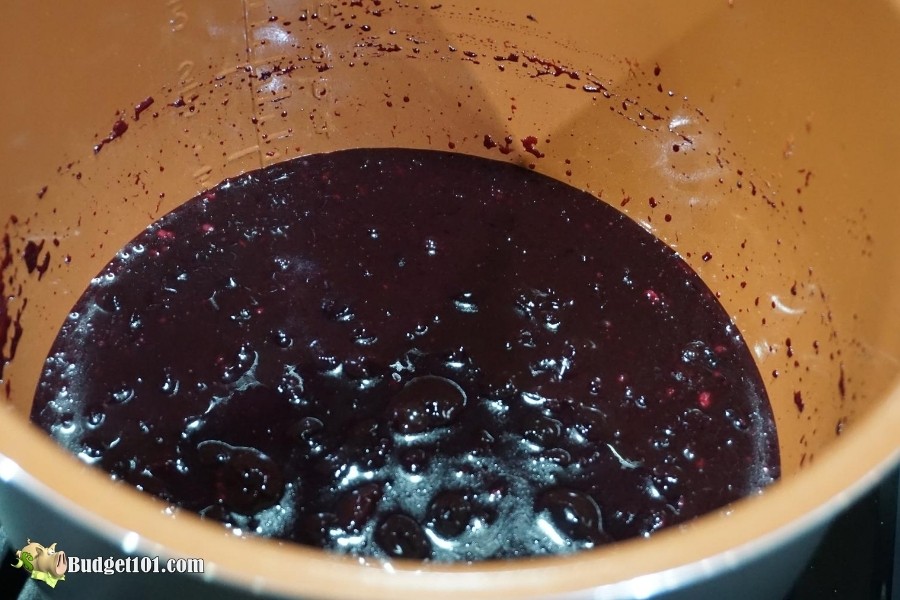 While the berry sauce is cooling, make the cake part. First, you measure the flour, sugar, baking soda, baking powder, and salt into a bowl, whisking to combine.

Then you have to melt the butter in another bowl, then whisk in eggs and sour cream into the butter. Then add the flour mixture to the egg mixture, beating until the batter is smooth and thick. 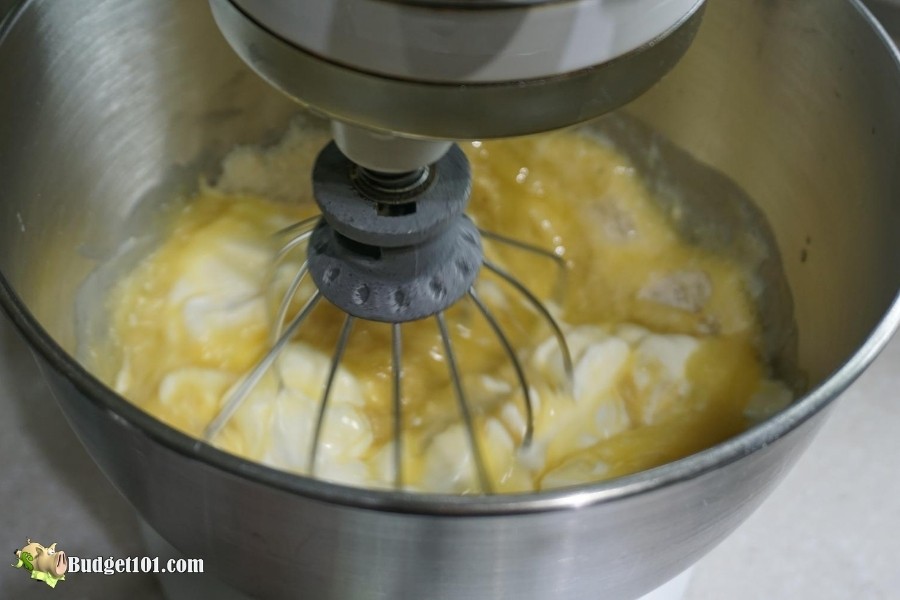 Dollop the batter mixture over the top of the cooled berry mixture. Don’t pour it, because it’s too heavy and you want to rest on top, not plummet to the bottom. Spoon it on! 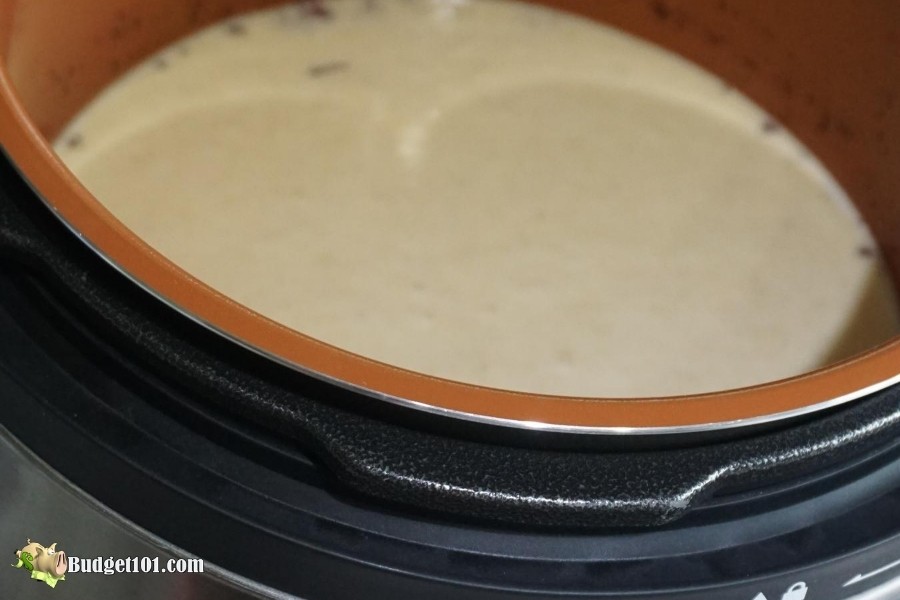 At this point, you can use the up and down arrows to set the temperature to 330°F, then press the target button twice and the time panel will flash.

Then use the up and down arrows again to set the timer for 40 minutes. Then hit the start button again to accept it.

Does that sound like a giant pain in the ass?? It should… because it absolutely was; and YES, I did have to do the whole damn process at least twice to get it to finally work.

Meanwhile, suddenly I’m having flashbacks of playing Nintendo, up-up-down-down-left-right-right, did I get my free man yet?? 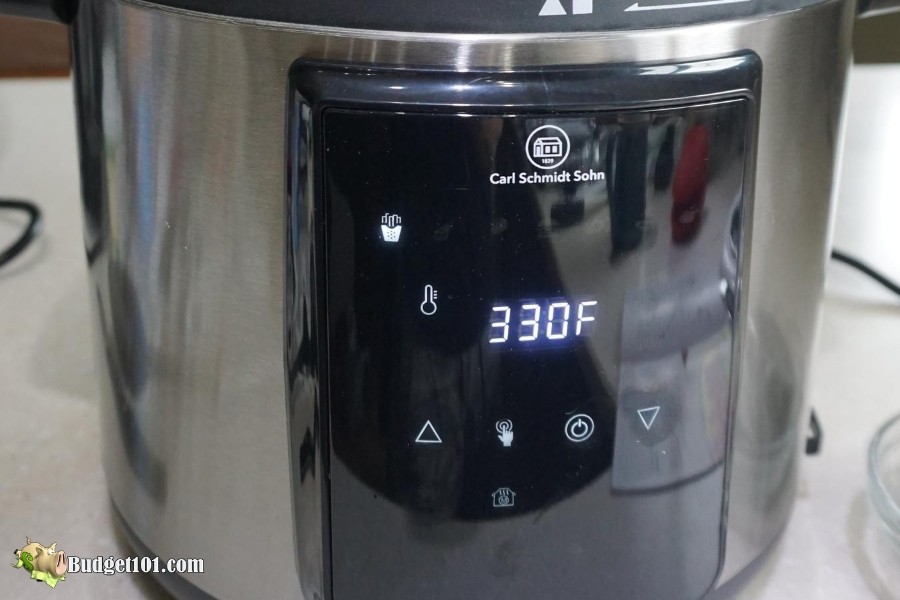 So, when the timer is up, you place the pot on a heat resistant surface to cool for fifteen minutes before serving. I wanted to make sure the cake was done, so I inserted a wooden toothpick, which came out clean, no crumb; I figured I was good to go. 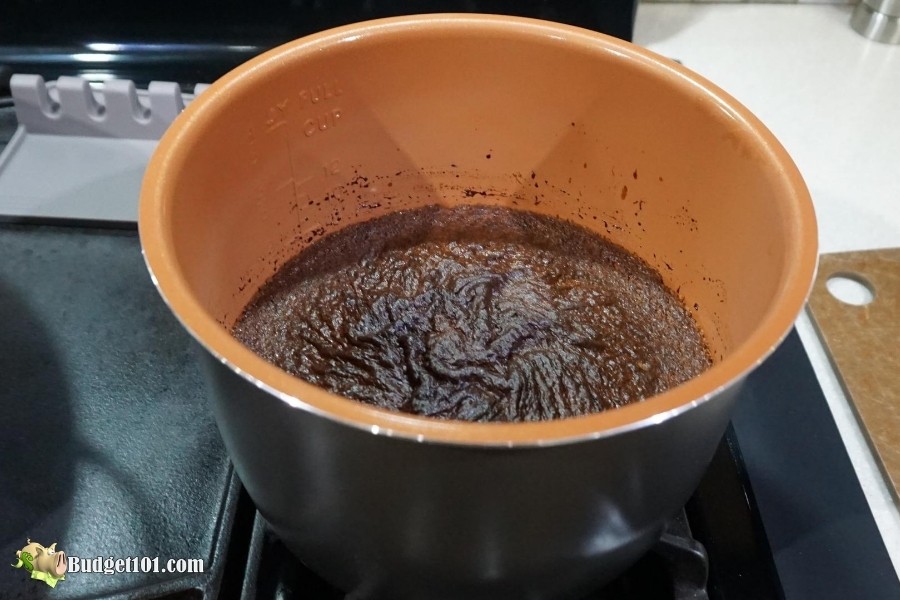 Visually, I wasn’t too thrilled with the top, it looked a bit overcooked, but hey, it’s an upside-down cake, no one’s gonna see that part, right?! 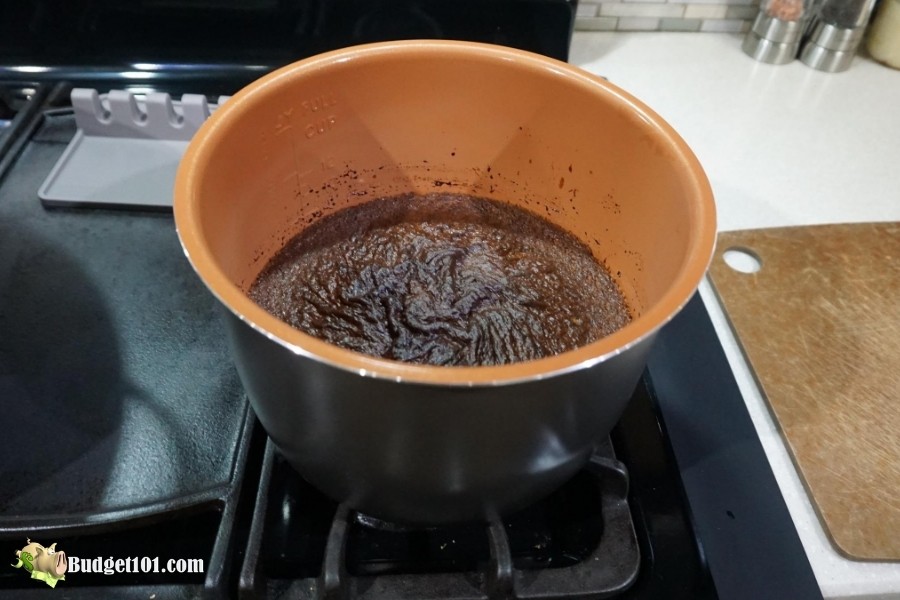 Now, here’s a little trick that I use with my other digital pressure cooker. Take a basic paper plate… 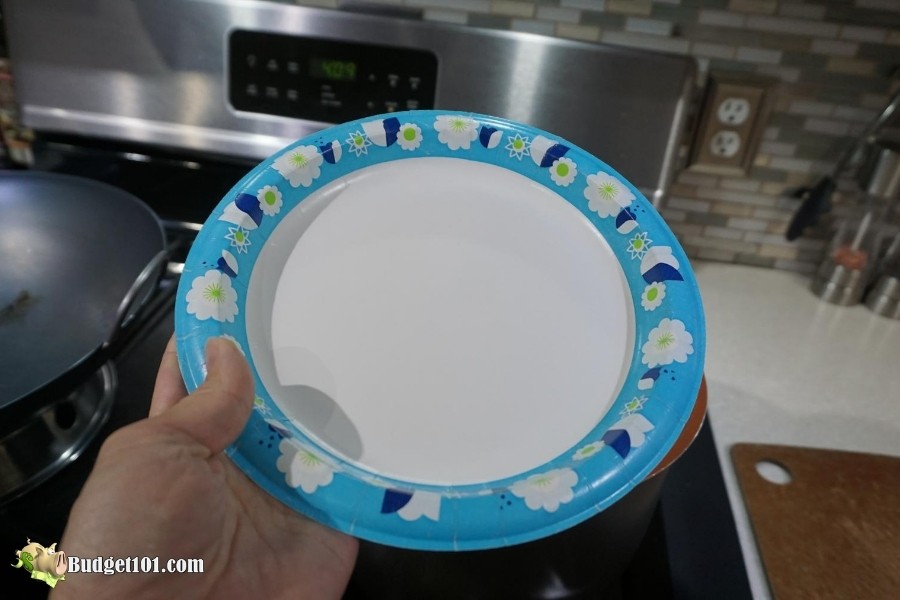 Put it inside the pot, face down. 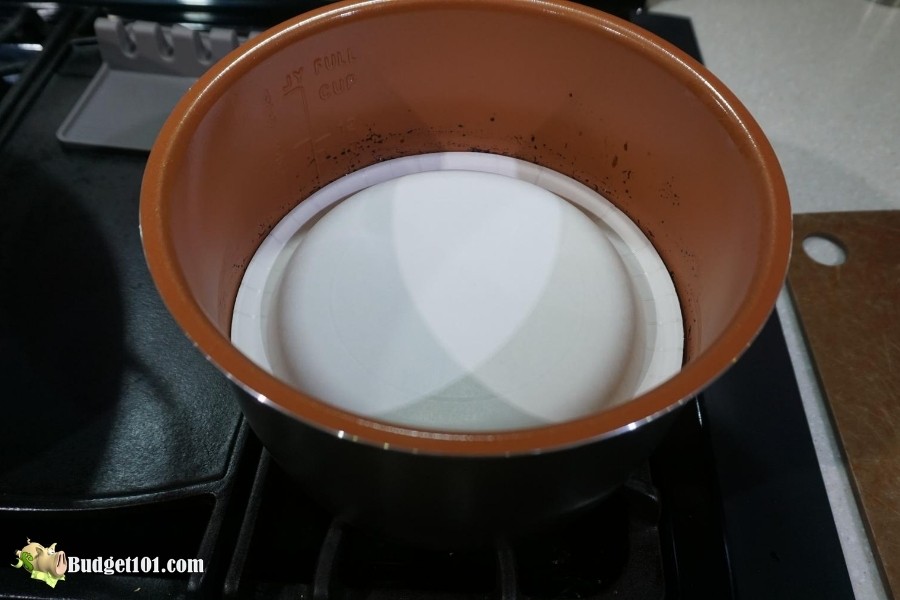 Use an empty coffee can or whatever you have, a bowl, etc. You want something that’s very lightweight because you’re going to use it to flip your cake. 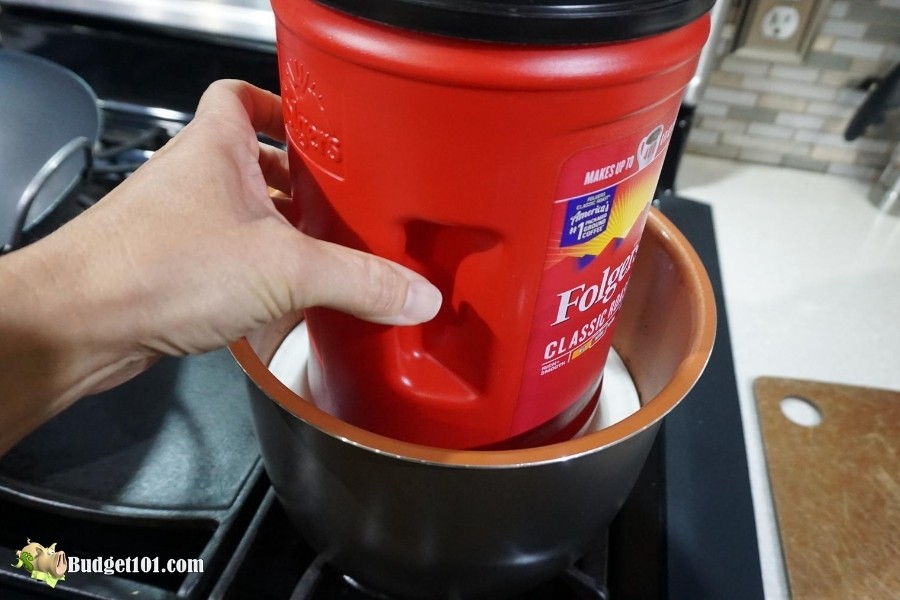 Gently pull up on the pot to release the upside-down berry cake onto the plate. 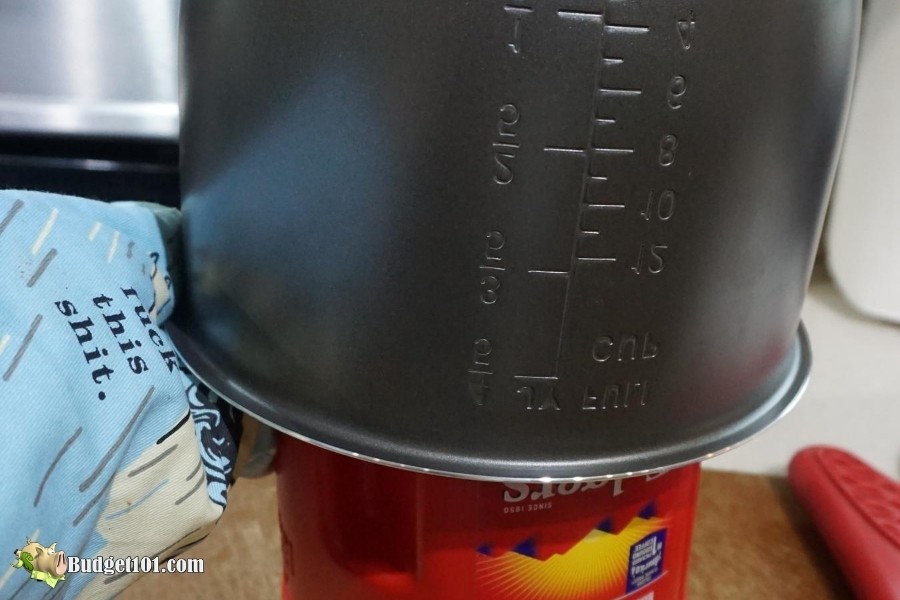 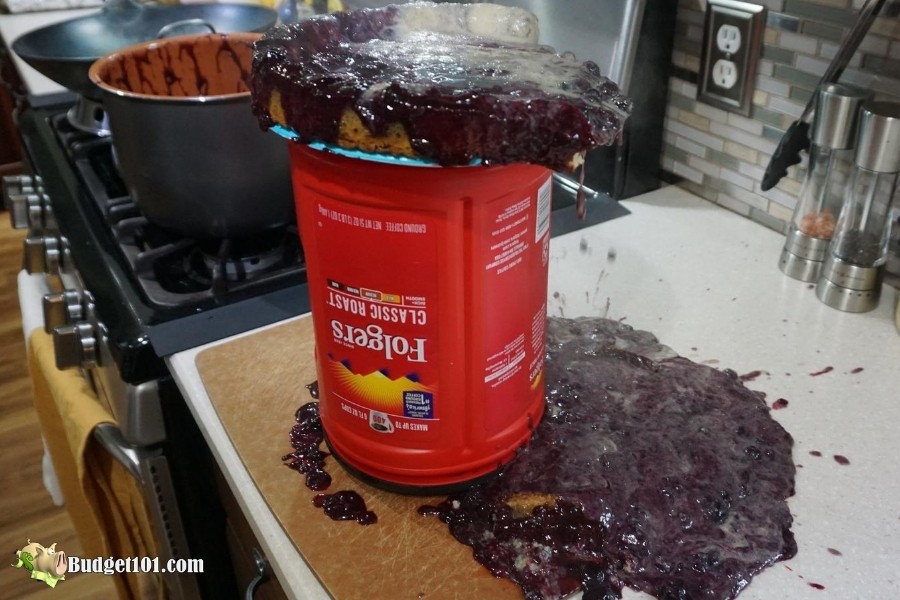 and the damn cake is still Not Done. The cake is a lie.

Salvaging what I can, I use a pastry scraper to scrape it back into the pot and shove it back in the Carl Schmidt Sohn Pressure Cooker/Air Fryer for another 30 minutes until it coagulates into the following shit show: 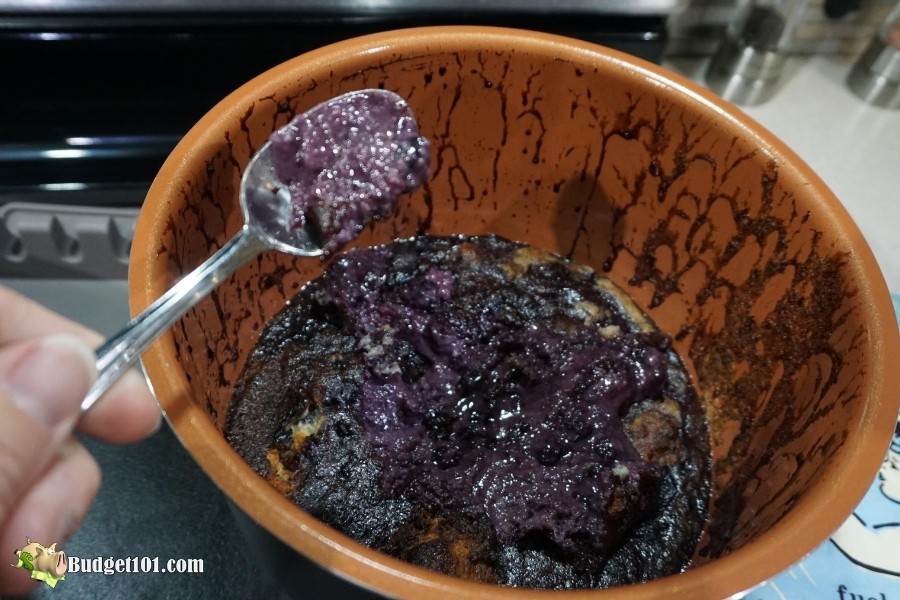 So.. this recipe stated it takes 15 minutes of preparation and a total cooking time of 55 minutes. I’m going to say this whole project took about 3 hours in all. I literally could have baked at least three upside-down berry cakes in my oven in that time frame. 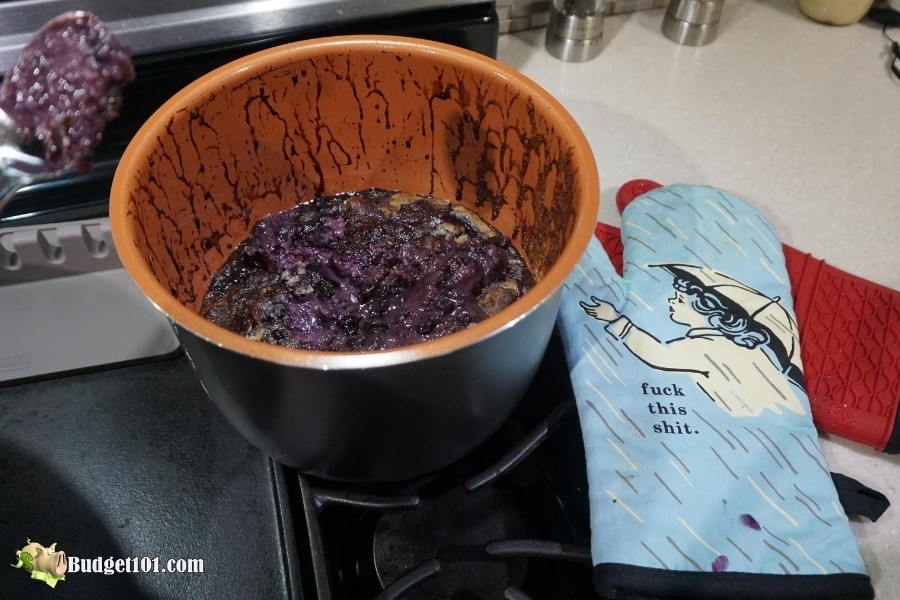 I’m frugal, I don’t waste food. I served it in bowls with a scoop of ice cream on top like a dump cake recipe. The flavor was fairly good, the “cake” not so cake-like.

Did I tell my family I scraped that shit off the counter? You’re damn straight I did, and they chose to eat it anyway. What can I say, they’re awesome.

Do I think this Carl Schmidt Sohn Pressure cooker/air fryer should be used for baking? Not a chance in hell. The good news is that the pot truly is non-stick and clean up is a breeze.

Do Yourself a Favor, Throw out the Cookbook

The recipe book that comes with the air fryer is beyond useless and should be immediately thrown away to save you time, money, and frustration. The font size is so tiny, you basically need a magnifying glass to read it.

None of the recipes pictured in the cookbook actually match the recipes provided. The chicken breast, broccoli, and rice do not match, the rice pictured is plain white rice, not rice with frozen mixed vegetables and multiple seasonings.

It also calls for 1/2 cup of sauce- what kind of sauce? The chicken pictured doesn’t have sauce on it, it has a crispy coating with chopped basil- which isn’t even in the recipe.

The images included were clearly not made with the unit, nor are the cook times correct, as you can see from the “cake” recipe above.

In multiple instances, the recipes were clearly not created for use with the Carl Schmidt Sohn Pressure cooker/air fryer.  They often reference accessories or items that didn’t come with the unit.

For example, the banana bread recipe included in the cookbook claims to make one 2-pound loaf. There is no loaf pan included, let alone a 2-pound loaf pan. You could technically squeeze 2 mini-loaf pans into the cooker at once, however, you cannot put 2 pounds worth of batter into 2 mini-loaf pans, you’d need 4 mini loaf pans.

The cheddar corn bread recipe says to use the multipurpose pan on the reversible rack. The unit did not come with a multi-purpose pan. It came with a fry basket and a roast rack. Same issue with the meatloaf recipe.

Many of the recipes call for items that don’t come with the unit. The chocolate chip skillet cookie calls for a baking pan to sit on a rack, and make sure the rack is in the lower position. There is no baking pan included.

How well does it “air fry”? Since this unit is touted as a multi-purpose appliance, we would be remiss if we neglected to review the air-frying capabilities.

We opted to fry a couple of frozen eggrolls. 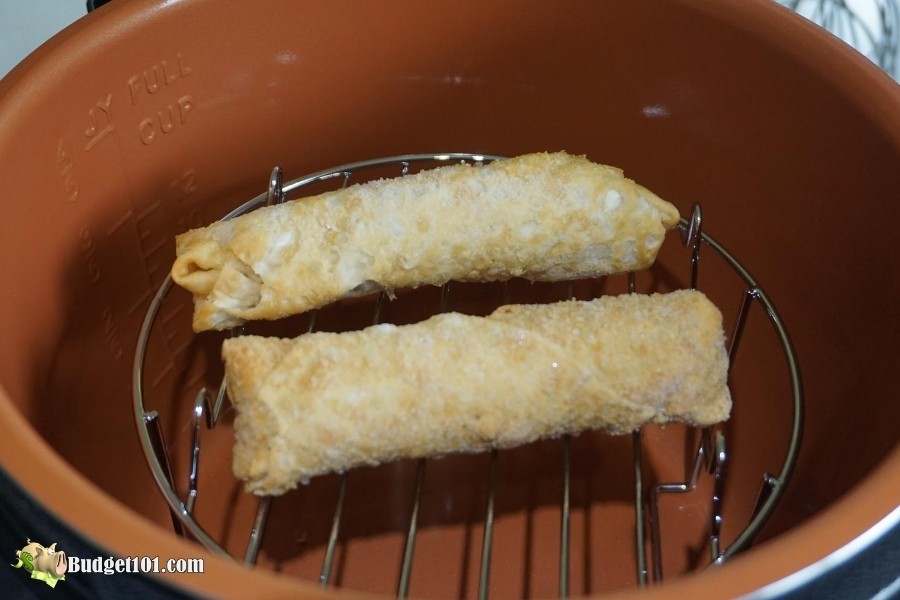 Since we already learned by the previous “recipe” that the books that came with the unit aren’t exactly reliable, we opted to follow the directions on the box instead. 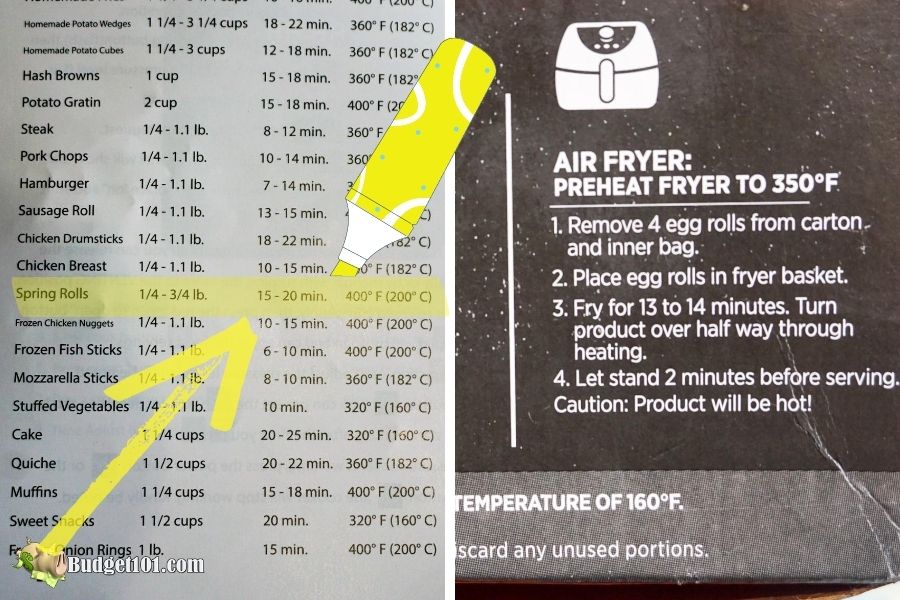 The directions with the unit indicate that we should use the 400°F setting for 15-20 minutes, whereas the package indicates 350°F for 13 minutes. It also says you need to turn them, but since this air fryer has adequate space around the rack, we’re gonna opt to skip that step. 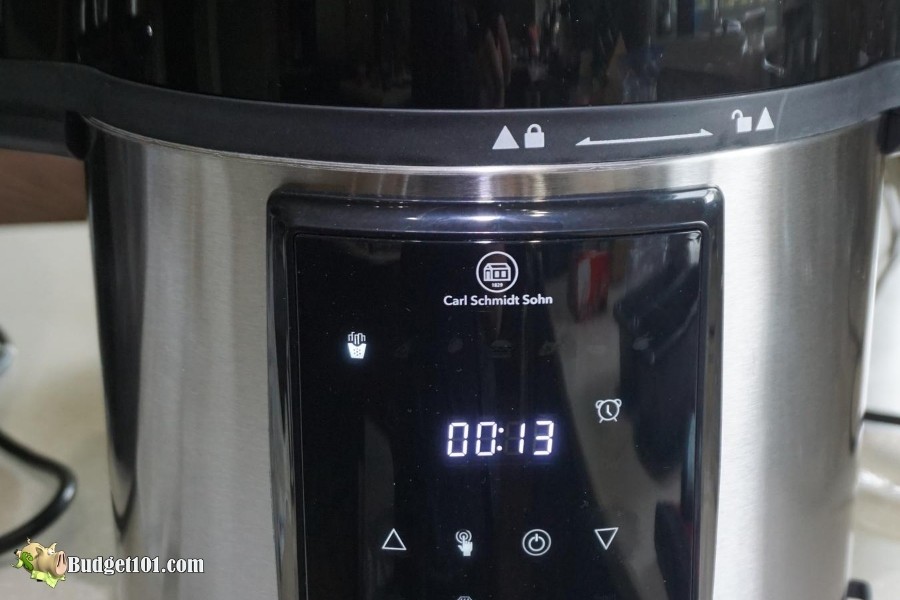 The package was spot on, thirteen minutes was definitely sufficient. 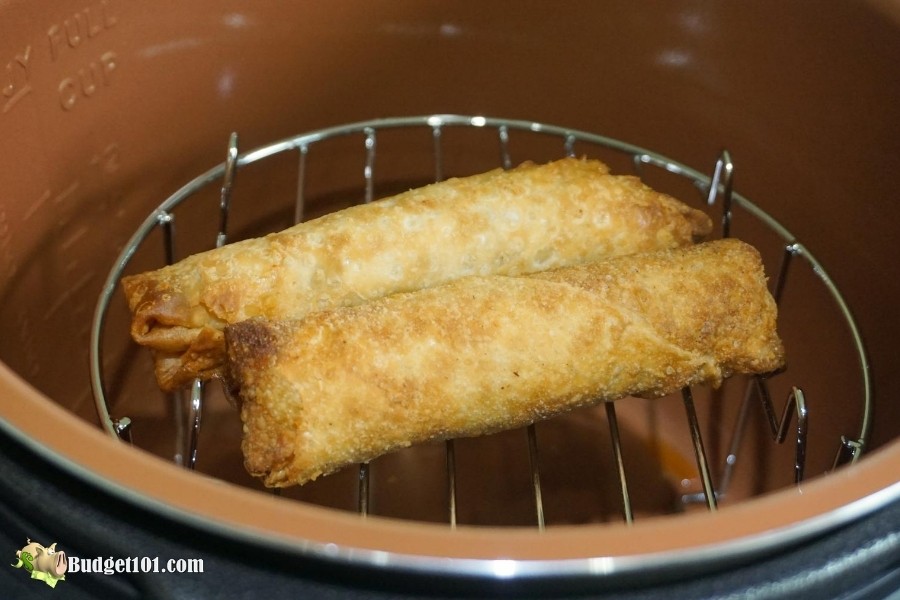 The spring rolls were cooked perfectly, crispy, hot throughout, and ready to eat. If you look, you can even see a few drops of grease from the rolls in the bottom of the pan. We didn’t add any grease or oil. So the air fryer actually reduced the grease, bonus! 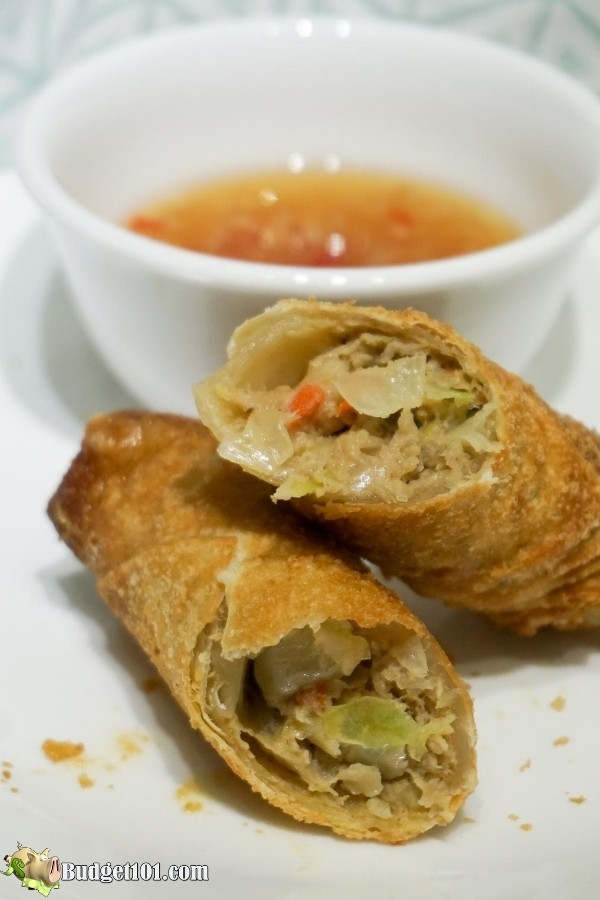 As a multi-purpose cooker to save time and possibly replace individual slow cooker, air fryer, and pressure cooker units, I’m not convinced.