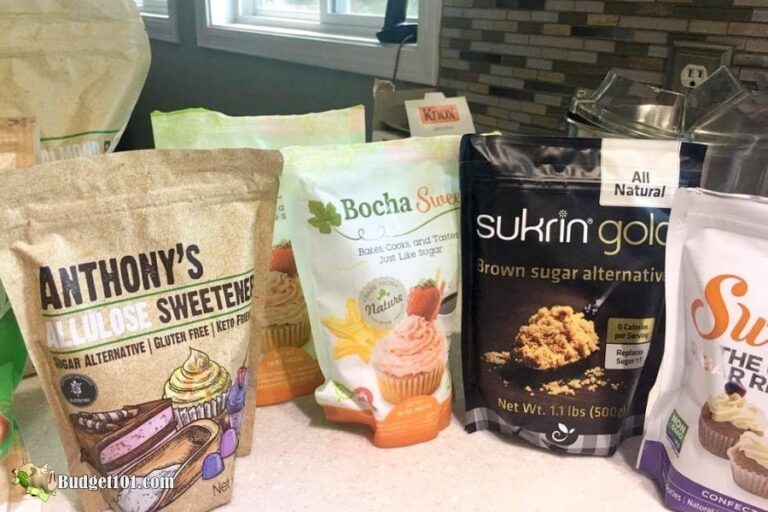 Here’s our take on Keto sweeteners- what to use, more specifically, what we personally use and the few we won’t even allow in our house!

Keto Sweeteners- The Good, The Bad, The Ugly

When it comes to Keto sweeteners, we are pretty darn particular. Not all “keto-friendly” sweetener options are body friendly. Some sweeteners cause bloating, gas (that’ll evacuate the NEIGHBORS from their homes when it expels!), or weird aftertastes that just plain leave a bad taste in your mouth, quite literally. 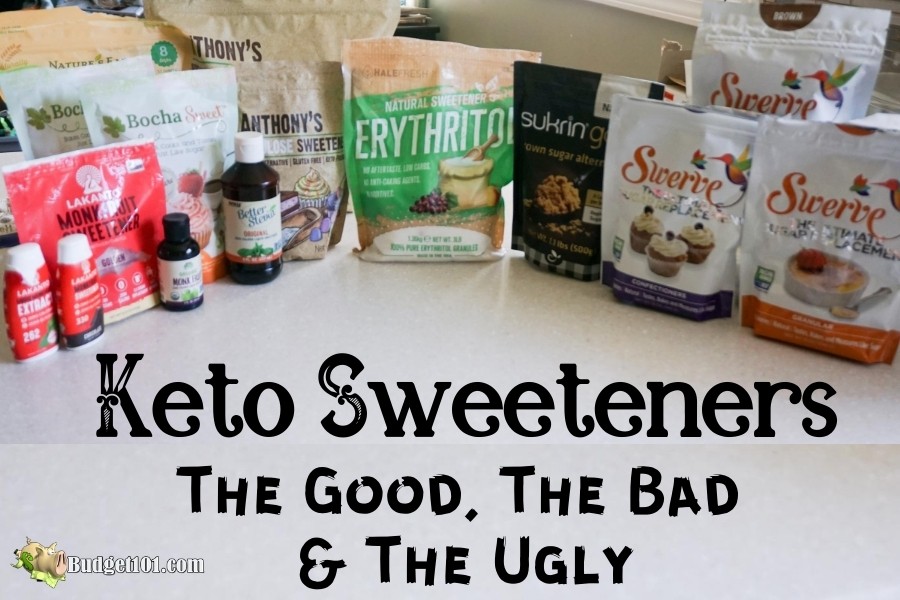 Bocha sweet sweetener is by-far my favorite choice in keto sweeteners. Bocha Sweet is derived using low-temperature extraction from a superfood kabocha squash and substitutes sugar cup for cup. It has a zero carb, zero calorie count, cooks, dissolves and tastes exactly like cane sugar with a zero glycemic content. That is to say NO insulin spike at all, none. 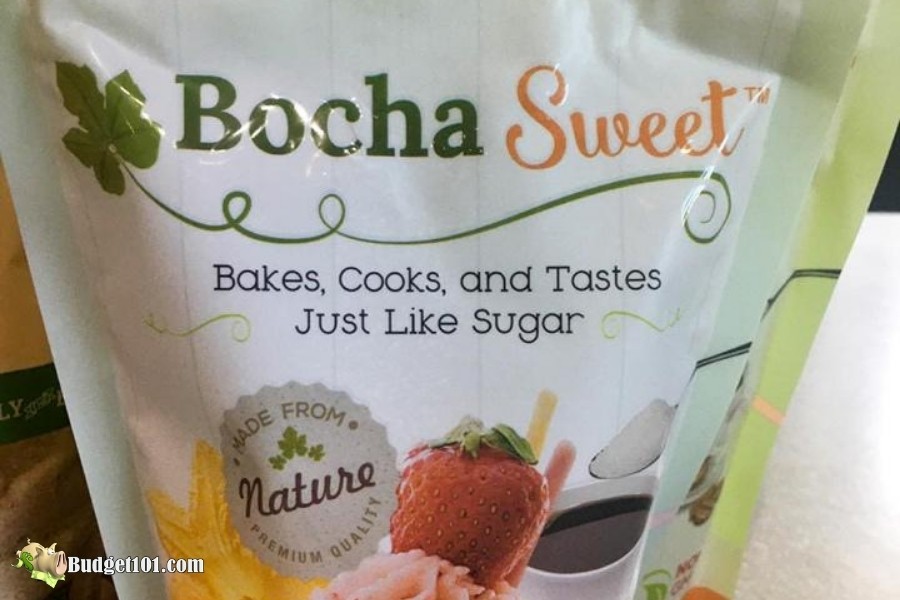 For the majority of recipes that I “ketofy”, I prefer to use this sweetener. It doesn’t cause any type of gastric distress at all, no bloating, no gas or flatulence, zero negative repercussions. The downside to this sweetener is that it’s literally the MOST expensive option available.

Allulose is a simple sugar (monosaccharide) that is naturally found in certain fruits such as figs, jackfruit, and raisins. It does not have a glycemic index, so it does not affect blood sugar, nor does it have a net carb count.

When Allulose is consumed, 100% of it is excreted from the body without being metabolized. The body cannot use any part of it for fuel so it’s simply excreted. Studies have indicated that Allulose can reduce insulin and blood sugar levels after meals.

Unfortunately, it’s about 70% percent as sweet as table sugar, so substituting it in recipes may require a little extra figuring (usually 1.4-1.5 to 1).  Since it’s relatively new on the market, long-term effects on health are not known. 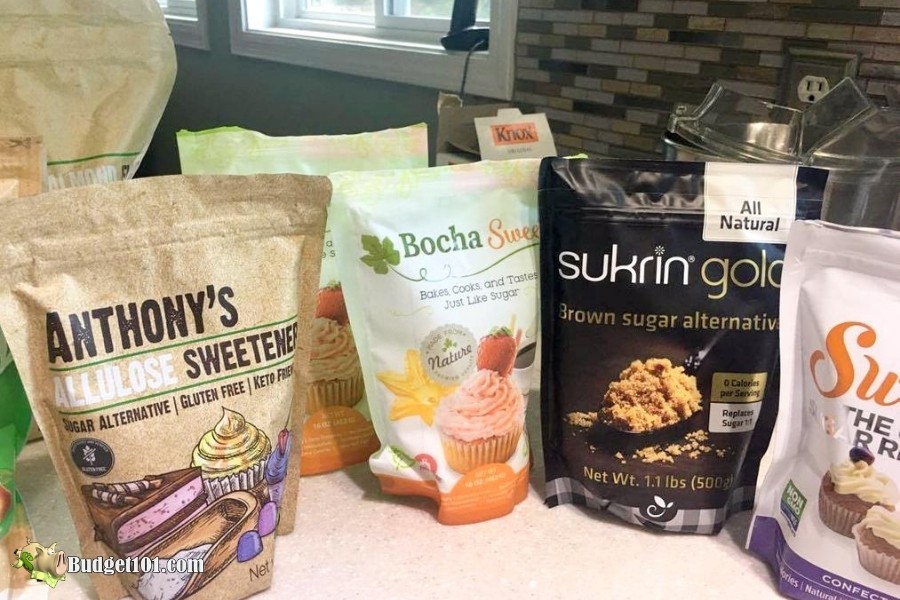 This sugar alcohol has zero calories and does not affect blood glucose. Erythritol is easier on the digestive system, but for some people, it still causes some gas or minor gastric upset. It’s best when used in baking or cooking, it does not dissolve well without heat, so it’s not good for mixing into beverages such as sweet tea or lemonade.

As a sugar alcohol, Erythritol has a slight cooling aftertaste, often thought of as “minty”.  Budget-wise, this is one of the least expensive sweeteners at 25¢ per ounce. Use it at a 1:1 ratio in baking or cooking, it measures just like sugar. 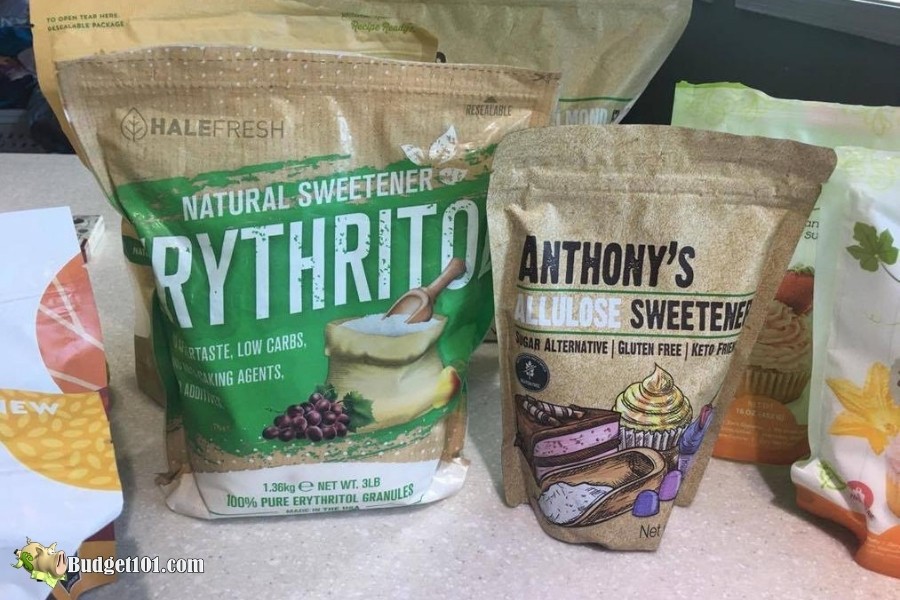 Monk fruit is 100-250 times sweeter than table sugar, as such, a little goes a very long way! Luo Han Guo (aka Monk Fruit) is native to China and is frequently blended with other sweeteners due to its odd, unusual aftertaste. 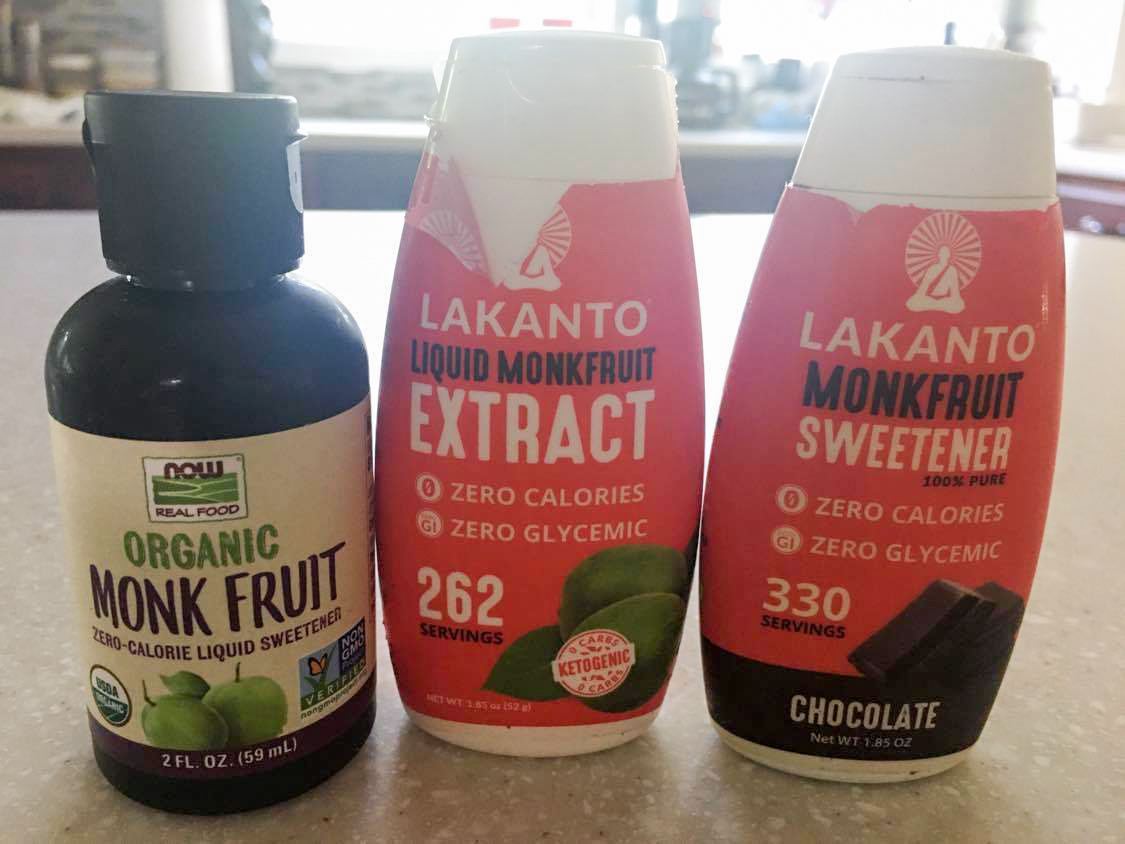 This sweetener has zero carbs, calories, and sugars and may help fight inflammation. It tends to be a little more expensive than other keto sweeteners. It comes in both liquid and granulated form. 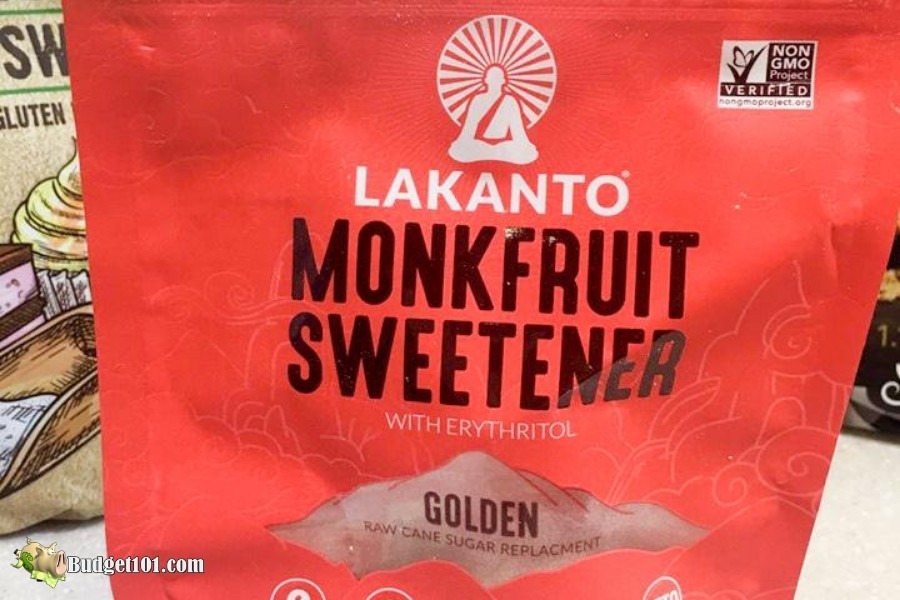 This keto-friendly option substitutes 1:1 for sugar (cup for cup), has a low GI rating, and is a mix of erythritol and oligosaccharides. It’s a great, affordable sweetener option for baking. 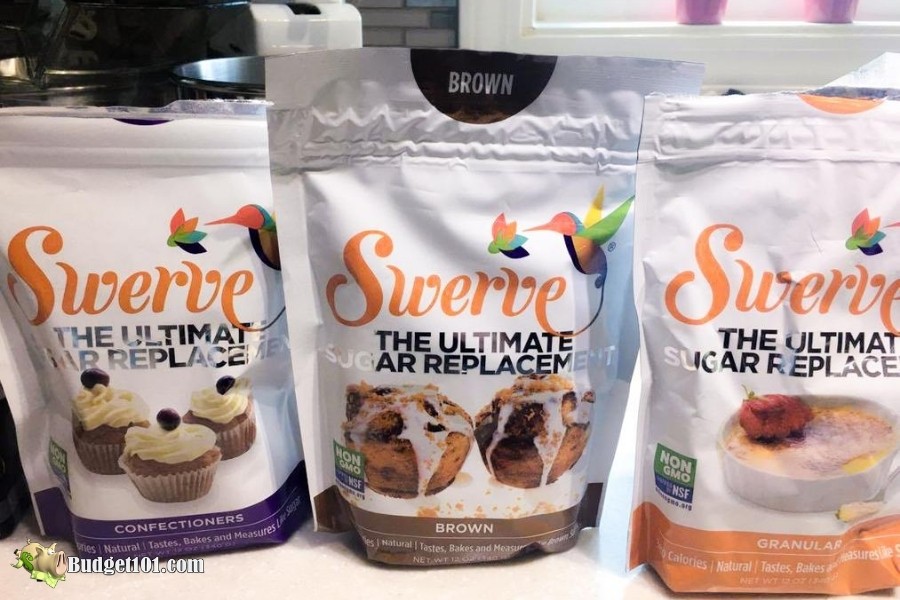 Nature’s “sugar leaf”, stevia is sold in both liquid and powdered form. It’s an herb that contains zero calories (and nutrients). Stevia is an acquired taste I’m afraid. 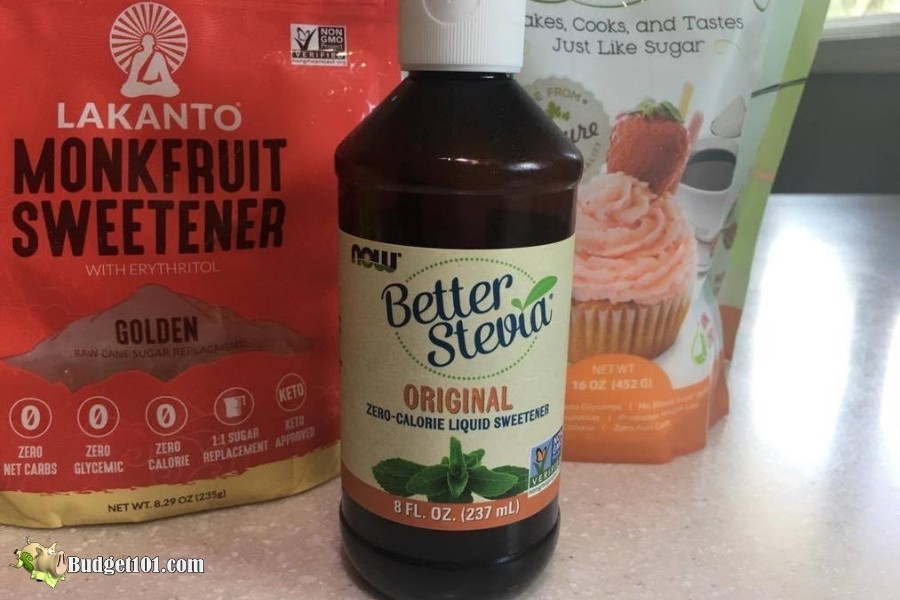 The plant contains steviol glycosides, sweet-tasting compounds that are estimated to be 200-300 times as sweet as sugar. The downside is that is has a bitter aftertaste, often lingering for an hour or more. 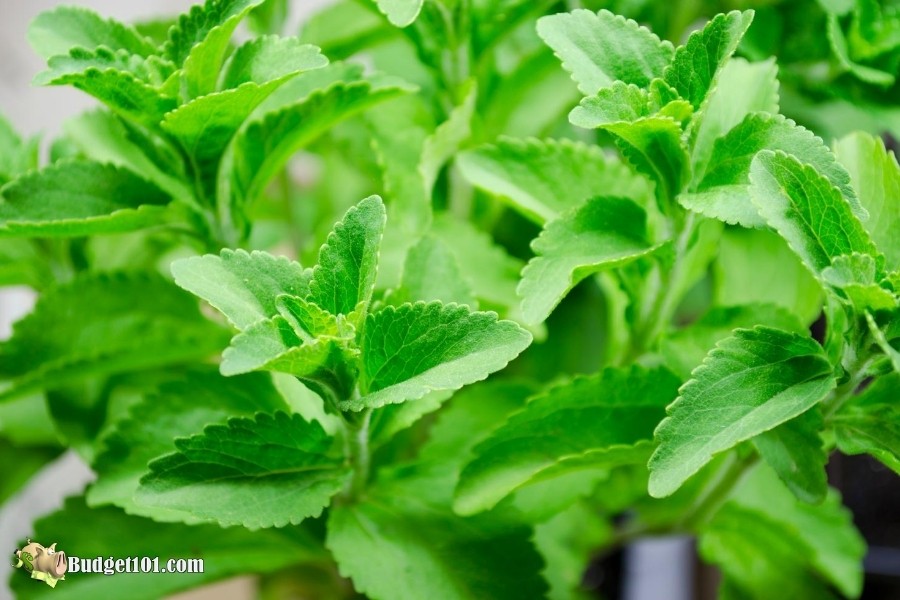 Also known as Splenda, it’s an artificial sweetener that passes through the digestive system, undigested. That is to say, it doesn’t provide any calories or carbohydrates at all. Be aware that this sweetener is often blended with others such as dextrose or maltodextrin which can and likely will kick you out of ketosis.

Xylitol is a sugar alcohol that naturally occurs in the fibers of fruits and vegetables. It’s commonly found in sugar-free products that are sold and can be purchased to make homemade keto-friendly products.

Unfortunately, xylitol is extremely toxic to pets and if they ingest even the tiniest amount (say, a stick of gum for example) it can and likely WILL kill your pet. For this reason alone, I won’t even allow this product or anything containing it in my home. My pets are family members, and I won’t risk their lives for a taste of sweetness.

This sweet-tasting syrup is derived from the yacon plant. It contains fructooligosaccharides (FOS) which is a type of soluble fiber (your body does not digest). While it contains approximately 11 grams of carbohydrates per tablespoon, it does not affect blood sugar.

While it can be used in beverages or salad dressings, it’s not recommended for use in recipes that are cooked or baked due as the fructooligosaccharides (FOS) break down in high temperatures.

Sweeteners that are NOT Keto-Friendly

There are several items that are often marketed as low-carb or keto-friendly, but are not. 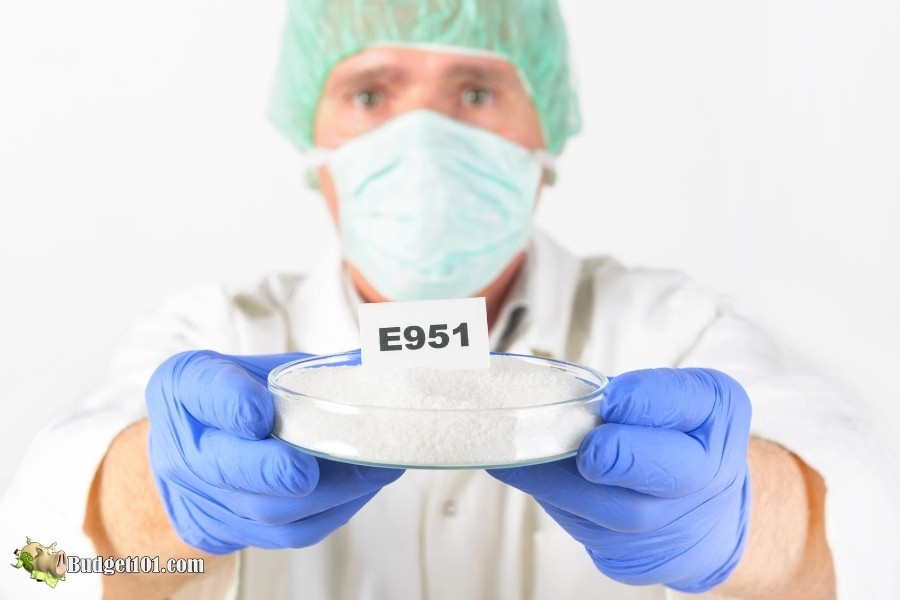 The glycemic index is a measure of how much a food raises your blood sugar. Some sweeteners, such as Bochasweet, are zero GI which means they don’t affect the blood sugar at all.

Glucose measures 100 on the GI scale. If you’re following a keto lifestyle, you’ll want to choose sweeteners that are the lowest in the glycemic index. As far as taste preferences go, it’s often beneficial to mix two or more to achieve the right texture and flavor in your finished recipe.