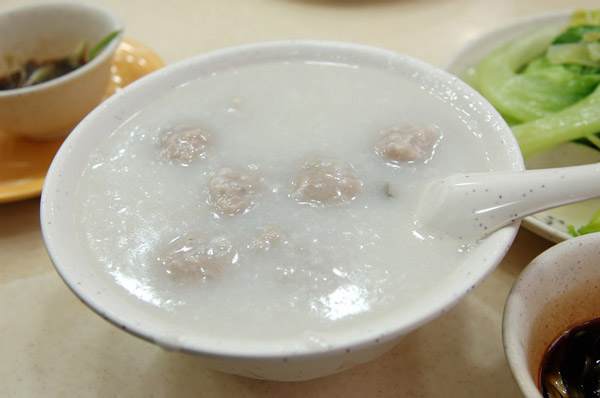 A Chinese folk tale tells of a very wealthy man–let’s call him Mr. Chang–who didn’t have to worry about food and life’s basic necessities. So every evening after dinner, he threw the leftovers away. A neighborhood beggar retrieved the food as soon as Mr. Chang was out of sight. Some years went by, and Mr. Chang had a tremendous financial setback. He lost everything–his beautiful home, his possessions, every asset he had. Mr. Chang realized he’d now have to . . . beg to survive.

Of course Mr. Chang went to the beggar’s very modest home first. A generous fellow, the beggar invited the formerly wealthy Mr. Chang to join him for dinner.

Mr. Chang sat, expecting a modest meal at the beggar’s table. Instead, the beggar served a sumptuous repast fit for a king. Plate after plate of tender meat, poultry and fish, vegetables and fruits sweeter than Chang had ever previously enjoyed, were placed on the table before him. When the two men were done, Mr. Chang asked how the beggar
had afforded such a feast. The beggar simply smiled at Mr. Chang and said, “I didn’t buy any of this food. You did. Many years ago. I merely took the food you
threw away every evening, and I dried it.”

People from other nations have often called Americans an odd lot because so many Americans are picky about food. Most Americans have never experienced a famine, and that lack of experience accounts for what some might say is discriminating taste.

Rich chicken stock and pork bones combine to create the most common and perfect base for great Chinese soups. Most of us can easily recognize these flavors individually. But many people won’t recognize this unexpected union in a Chinese soup base. Those whose dietary and/or religious restrictions eliminate pork and shellfish from the diet can still, however, prepare excellent and authentic soups–even Won Ton. I’ll show you how.

Who doesn’t love a great bargain? I make some of my own bargains by separating the bones from pork chops and roasts instead of paying the butcher for a package of bones. Whether you decide to do as I do, or you buy them separately, put one or two in individual freezer packages, and you’ll have them ready whenever you need them.

If I don’t feel like I have enough time to fuss in the kitchen, but my tastebuds are salivating for a taste of Egg Drop Soup or Velvet Corn Chowder, I’ll grab a jar of kosher chicken bouillon to use in creating a perfect stock base. Low sodium bouillons have always tasted bland, even flat to me. Even when I’ve tried to add salt to them, the taste just doesn’t compare to that of a homemade or kosher bouillon stock. The kosher bouillon tastes less salty and much richer than more commonly used bouillons.

Great Britain’s influence over Hong Kong, a British colon in Canton, China, until the end of the 20th century, extended into Chinese kitchens. The Europeans, for example, played an important part in the creation of many dishes using corn, ketchup or carrots Considering China’s history, build over thousands of years, I suppose we could add a phrase to that old saying, “You can’t teach an old dog new tricks,” but you certainly can teach them to an old dragon!

Feel free to use your food processor when you make Velvet Corn Soup. You’ll need to mince a little chicken breast meat very finely. Though it’s easy to do by hand, some of you will prefer to do the chicken in the food processor.

Velvet Corn Soup offers a delicious, but slight variation on Egg Drop Soup. This is a very easy recipe, and you don’t have to worry if you are careless on the first run of trying this. You won’t ruin it.

Mince chicken very finely, either in a food processor, or first with the sharp edge of a knife, then using the back of the knife.

Combine corn, salt, sugar and chicken stock (with options added here as well, if you’d like) in medium saucepan.

Bring to boil, and add cornstarch mixture, stirring to combine cornstarch blend with the soup.

Reduce heat to low. Drizzle chicken breast-egg white (or egg) mixture into soup, and stir in one direction at all times. The best way to achieve this technique is to drizzle the egg into the soup with one hand, and stir with the other, always keeping the same direction. If it reminds you of that childhood game of rubbing your tummy with one hand while you patted your head with the other, you won’t be wrong!

Remove from heat. Garnish with green onion and the ham, if you’d like. Stir in sesame oil, and serve immediately.

For an easy Egg Drop Soup, just omit the chicken breast (but you don’t really have to!) and the corn. You might want to double up on the broth, however.

Congee, also called jook, is a mainstay of the Chinese diet. A very inexpensive dish, the Chinese have enjoyed this soup for breakfast as well as lunch and dinner. Some Chinese, however, have never had the pleasure of dining on a bowl of jook for their morning meal. In the northern reaches of China, rice doesn’t grow as easily as it does in the south, and this grain has become a commodity.

A versatile soup, congee wears many masks, and you can have fun playing with the variations. Depending on the leftovers you have in your refrigerator when you’re making jook, you may decide to add fish, steak, chicken, that little bit of shrimp you’ve been saving in the freezer for that Lord-knows-when Doomsday party, perhaps that can of chopped clams stil in the cupboard after all these months. Let your imagination take flight with this soup. If you’re a vegetarian, don’t let that stop you from trying your hand at jook. Add some snow peas, a little broccoli, perhaps a few varieties of mushrooms, even some thickly shredded lettuce will work in this dish.

I soak black mushrooms, dung goo, in about 3/4 cup of water for twenty minutes or so. I don’t add many–maybe 5 or 6, and I cut each mushroom into at least 6 pieces. Then I throw this delicacy into the soup, along with the water in which they were soaking. Black mushrooms, however, are more expensive than the Japanese mushroom closest in flavor and texture, shiitake. From my perspective, shiitake is virtually the same mushroom, and if I can’t find the black mushrooms, which are often in a fairly good-sized bag, I’ll opt for the shiitake without giving it a second thought.

A very hearty and filling soup, you may not need more–or much more–than this at a meal.

Congee with Chinese Meatballs(As Pictured Above)

Bring rice and water to boil in large soup pot.

Stir occasionally to prevent rice from sticking to bottom of pot. Lower heat.

Blend meatball mixture together, and allow to sit 10 to 20 minutes.

Simmer soup about 2 hours or until thickened. If soup gets too thick, add more water. This should be a soup with body that’s thicker than chicken noodle soup and thinner than Italian
spaghetti sauce. Form meatballs, approximately 1 to 1.5 inches in diameter. Add meatballs to soup, gently stirring with a chopstick. Cook at least 20 to 30 minutes longer.
When ready to serve, place 1 teaspoon sesame oil into each individual soup bowl.

Ladle congee into each bowl, and sprinkle with green onion.

Allow everyone to season their own bowls with soy sauce, salt, pepper, Louisiana-style hot sauce and even fried noodles. You can deep fry sliced egg roll skins to a golden brown to create the same noodles you find at a Chinese restaurant.

Serves at least 6 hearty eaters in this form of the recipe.

I always have soy sauce, salt, pepper, Louisiana-style hot sauce and a bowl of scallions–chopped green onions–on the table when I serve congee. Sometimes, when I can find it, I’ll serve jook with a bowl of chopped fresh cilantro.

If you prefer to use fresh, thinly-sliced steak instead of meatballs, season the thin strips of steak like you do the meatballs, and allow the jook to do the rest. Any kind of steak will work fine in this recipe.

Babies love this soup too. Depending on the baby’s age, of course, keep the seasoning very simple. Just a dash of sesame oil and a
dash of soy sauce are plenty. When the baby gets a little older, add a few smashed meatballs.

Till next time, bon appetit!

View More Recipes from Around the Globe