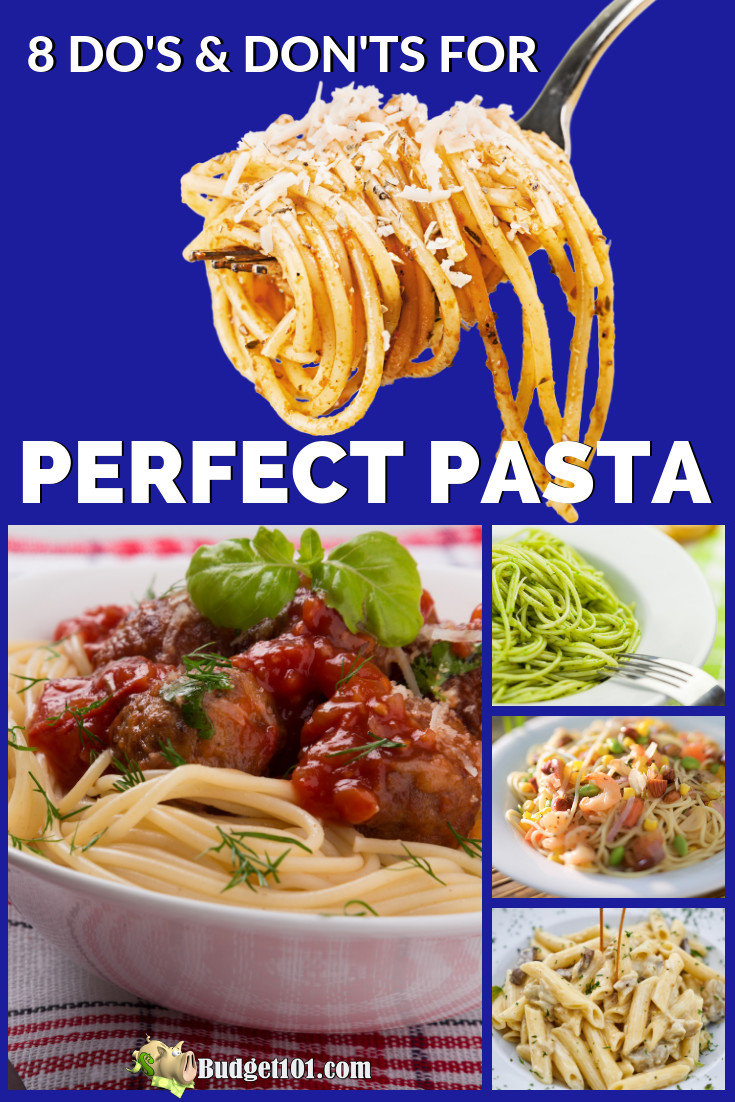 Pasta may be the most fabulously cheap and simple meal, but it’s also the most misunderstood! He are some pasta tips-n-tricks to ensure that you’ll never again find yourselves dining on a plate of soggy spaghetti smothered in lifeless, loser tomato sauce. First and foremost, we highly recommend homemade pasta, such as this tomato basil pasta. It’s dirt cheap to make, less than 25¢ per person and offers incredible flavor.

1. DO Read the Instructions: Spaghetti packaging recommends certain cooking times for a reason. Follow their advice! This is not an area where creativity is encouraged. Pay attention to the clock and don’t overcook pasta—it’s one of the most committed pasta faux-pas.

2. DON’T Add Too Much Water: The ratios of water-to-pasta are important. You want about 1 to 1.5 gallons of water for every one-pound box of dry pasta. Using the proper water ratio reduces clumping and ensures a consistent texture to the pasta. Bring the water to a boil BEFORE adding the pasta. Pasta contains starch granules on the surface, when they hit boiling water they swell up, reaching their maximum volume, then pop.

3. DO Salt the Water: Add about two and a half teaspoons of salt per quart of water before sticking the dry spaghetti into the boiling water. The salt and water should almost reach a broth-like consistency. The saline content in the water is important.

Salted water for boiling is actually a very heated debate online. Generally speaking, we measure the salt with a scale and use 50 grams per pound of pasta. It’s irrelevant which type of salt you choose to use as long as it’s properly weighed first.

Note that there is a huge difference between the volume of 50 grams of kosher salt vs 50 grams of table salt.

4. DON’T Parcook Pasta: Parcooking, or partially cooking foods early so they take less time to cook when you’re preparing to serve them, is definitely not recommended with pasta.

But if you must, as in an emergency dinner party situation, put the pasta on a large tray (but don’t stack it), let it cool, and drizzle olive oil on top.

5. DON’T Try the Toss-Against-the-Wall Trick: Throwing food against a wall should be avoided, just generally speaking. This well-known, overshared projectile method of checking pasta doneness is an old wive’s tale. Instead, allow it cool for a few seconds, then pop it in your mouth. It should be firm, but not difficult to eat in any way.

6. DO Gussy Up Packaged Sauces: There’s no shame in cheating a tad with store-bought sauces. They provide a great base, but you should add your own flair.

The cherry tomatoes will release fresh flavors and create a nice balance with the tastes from the prepared sauce. Plus, you can easily throw this together during the pasta-boiling time frame.

Or, if you only have canned tomatoes on hand, you can whip up a batch of homemade sauce with a few seasonings.

7. DO Toss Pasta with Sauce: Once the pasta is two minutes shy from being done, drain the pasta and add it to your tomato sauce creation while it’s still HOT. This will allow the noodles to finish cooking while soaking up the good tomato flavors.

Plus, a fun chemical reaction will happen where the pasta releases starch to thicken the sauce. If you want to further enhance your sauce, add a bit of the pasta water to the sauce. The starchy water helps the sauce cling to the pasta, emulsifying with the fat and cheeses that are added and will help it acquire a scrumptious creamy texture. A couple of tablespoons usually does the trick nicely.

8. DO Finish the Dish with Fresh Toppings: Fresh basil takes the flavor to the next level, or try the garbage-pail sauce approach with nuts, raisins, and capers or kale and white beans.

Now that you have this new-found knowledge of how to cook the perfect pasta, here are a few other pasta recipes we think you’ll enjoy: