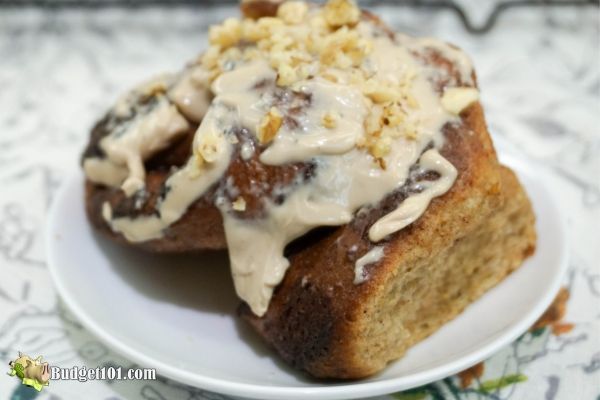 If you’re following a keto lifestyle so you can have amazing buns of steel, you’ll love our Keto Cinnabuns! These pillowy, yeast cinnamon rolls are reminiscent of those delicious buns you’re used to smelling as you walk through the mall. The catch? Our delicious keto cinnamon yeast buns are only 3 net carbs each. 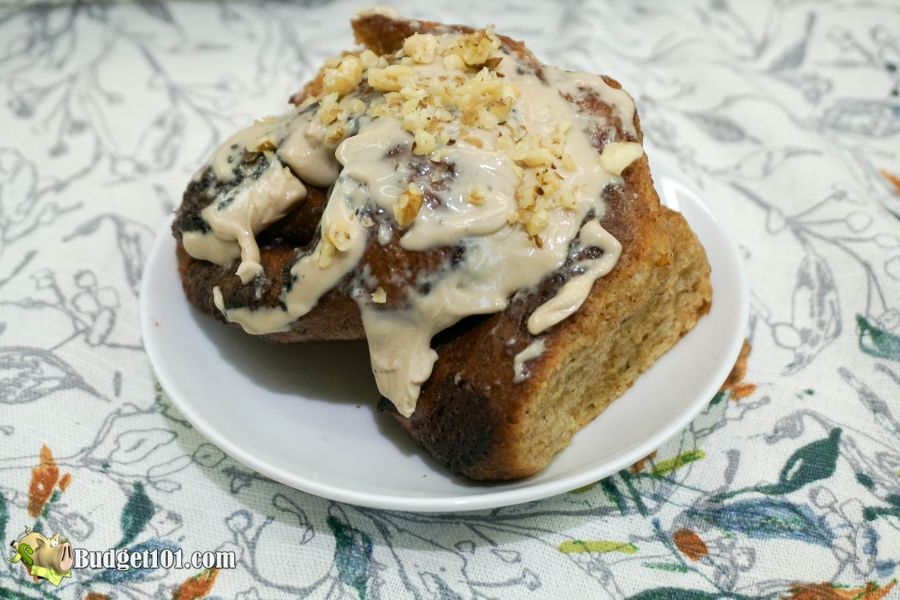 Dirty Keto or No?

A note about the ingredients. We’ve been asked a time or two if this is a Dirty Keto recipe, due to the vital wheat gluten. No, this is not a dirty keto recipe, it’s a clean keto recipe. Vital wheat gluten is not a grain, it’s a protein that basically looks like flour, but doesn’t contain any starch. If you are a Celiac, you’re advised to avoid this recipe. 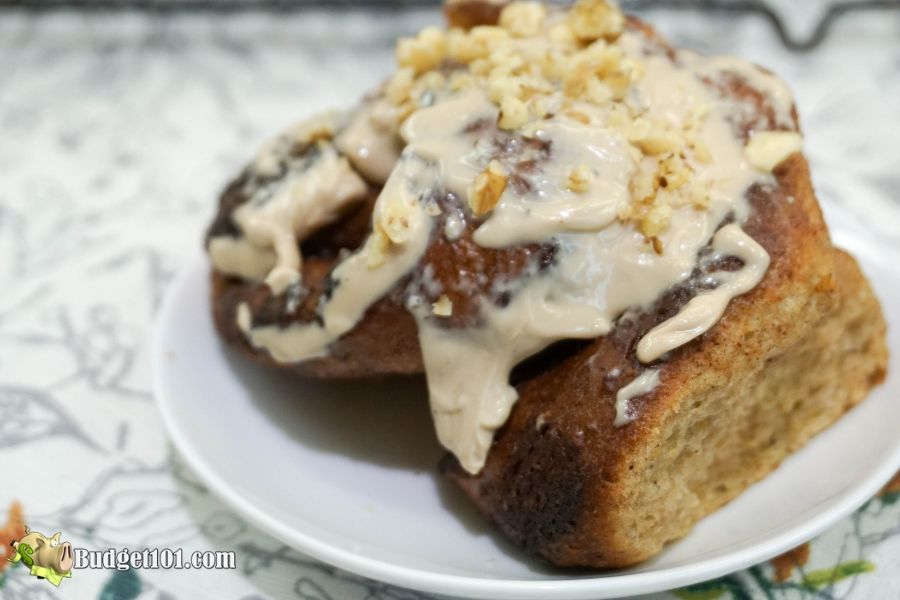 The oat fiber in this recipe is not ground oats, or oat flour. Oat fiber is made by grinding and purifying the outermost protective layer of the oat grain itself. It’s a great source of insoluble dietary fiber, which is what helps keep your carb count down. Luckily while it provides a grain-like flavor and texture, oat fiber is a zero impact ingredient.

The texture of these keto cinnamon buns is spot on with any store-bought yeast cinnamon bun. You’ll also notice in this recipe that I chose to use Swerve sweetener rather than place erythritol.

Swerve contains oligosaccharides which are prebiotic plant fiber. It’s the same level of sweetness as sugar, whereas pure erythritol is only 70% as sweet as cane sugar. 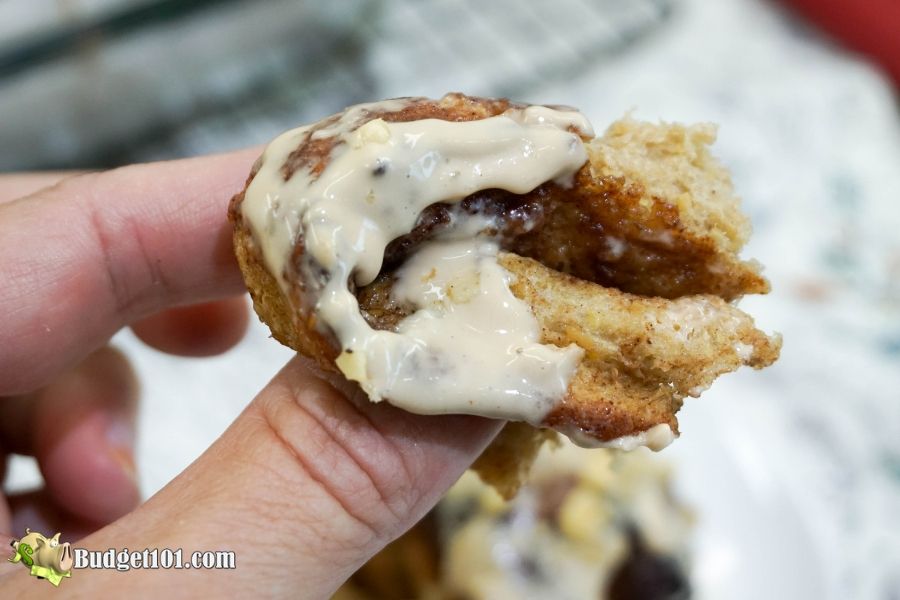 Since this cinnamon yeast buns are a traditional sweet-dough bread recipe, in order to achieve the same glorious flavor and the delectable centers bursting with gooey cinnamon deliciousness, I opted to use the Swerve Confectioners sweetener.

The reason for using the powdered, rather than the granulated version, is that the powdered blends in better and creates a better texture that more closely resembles the non-keto version of yeast cinnamon rolls.

How to Make Keto Cinnabuns

This recipe is very similar to traditional bread dough. You mix the water, honey, and yeast in the bowl to proof the yeast, then add the remaining ingredients and knead with a stand mixer. Once the dough is ready, overturn it onto a prepared surface. 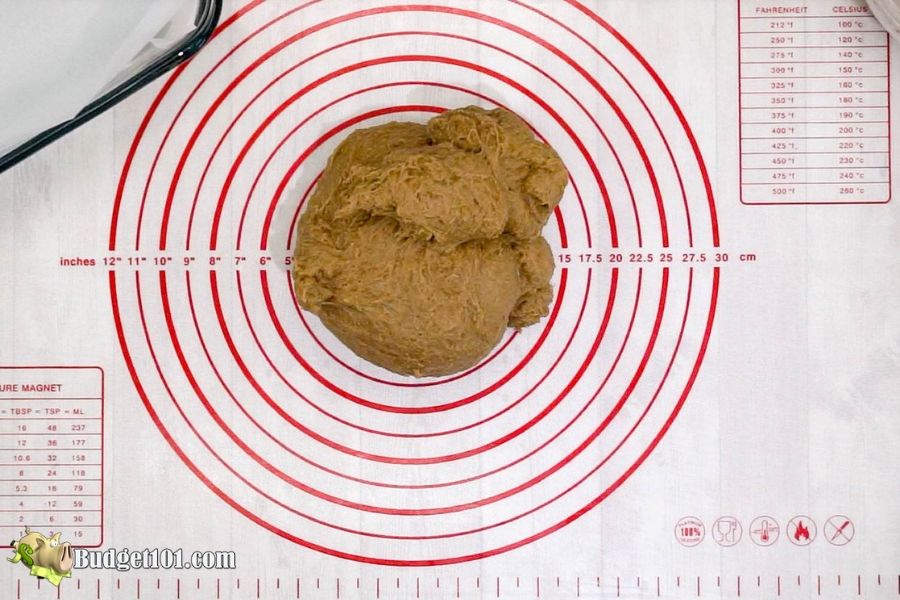 Pat the dough down into a rectangle shape. The dough is quite bouncy so do the best you can, but try to work fast! 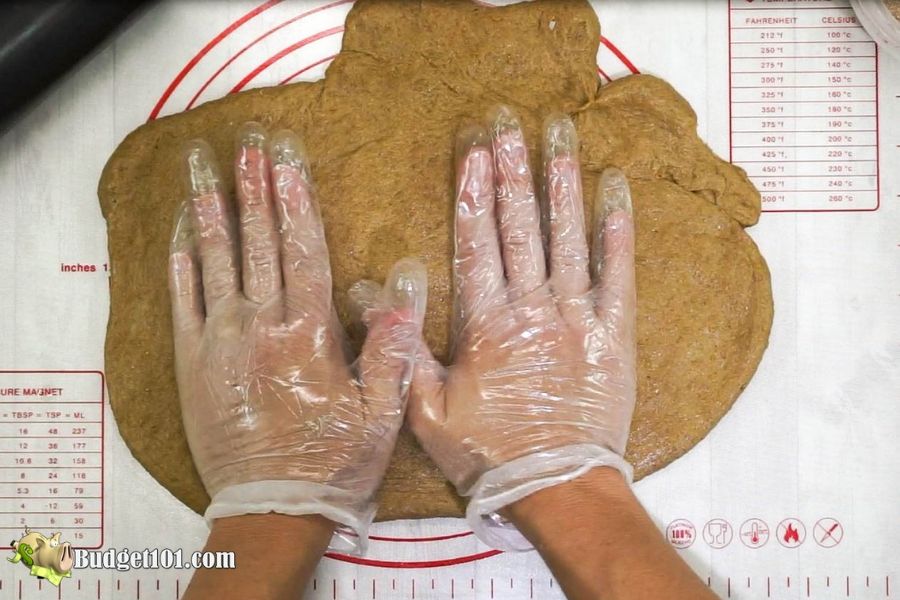 Pour the melted butter over the dough, like so: 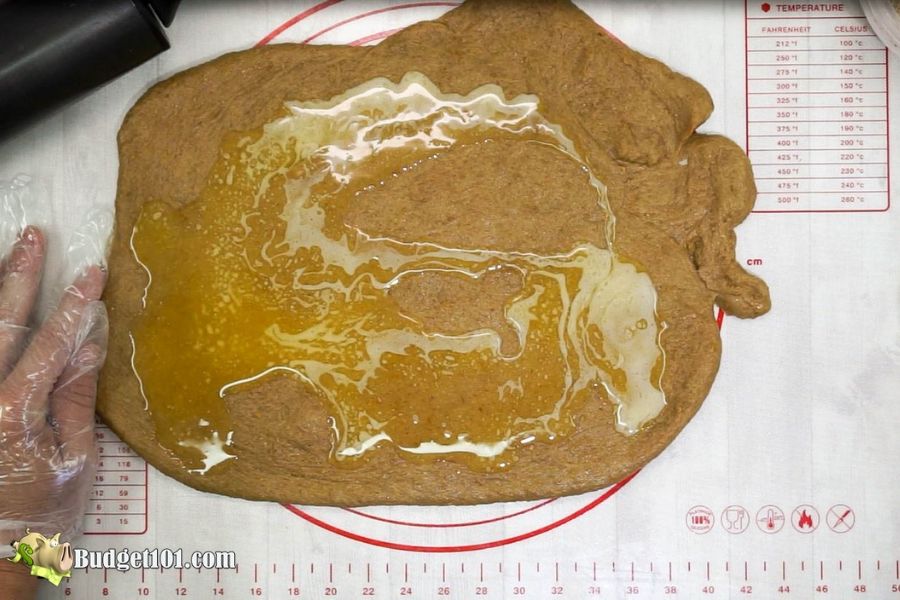 Then, using the back of a spoon, spread the melted butter evenly over the top of the dough. Sprinkle liberally with the cinnamon/sweetener blend. 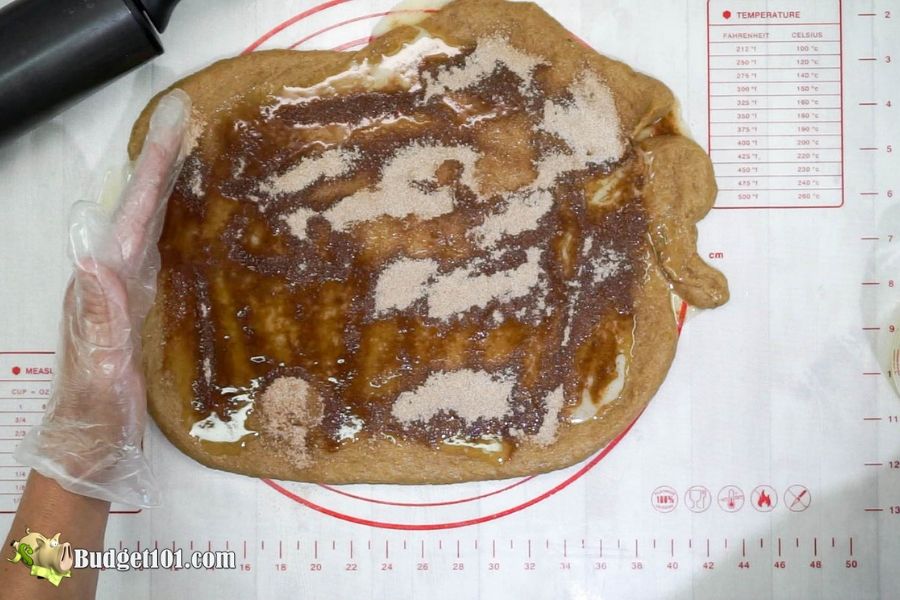 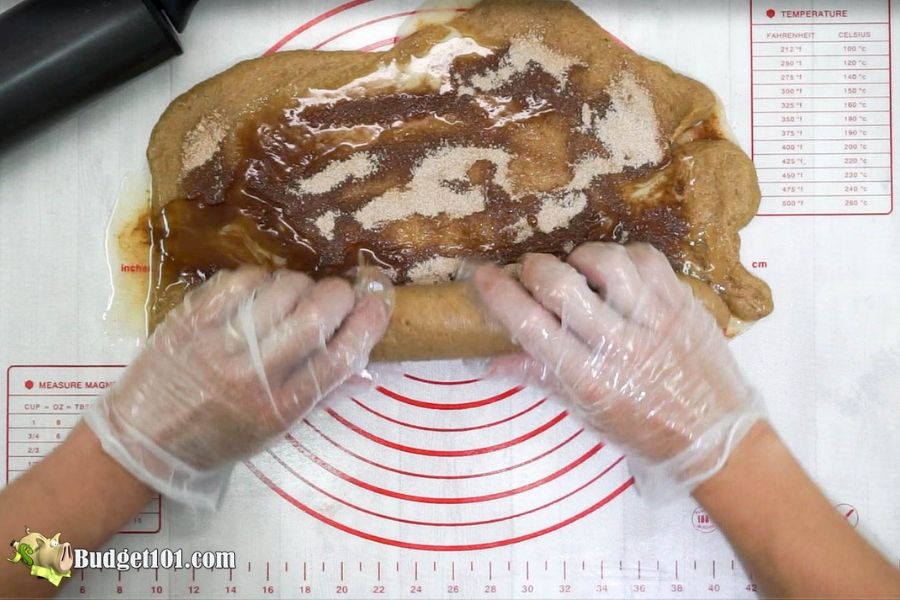 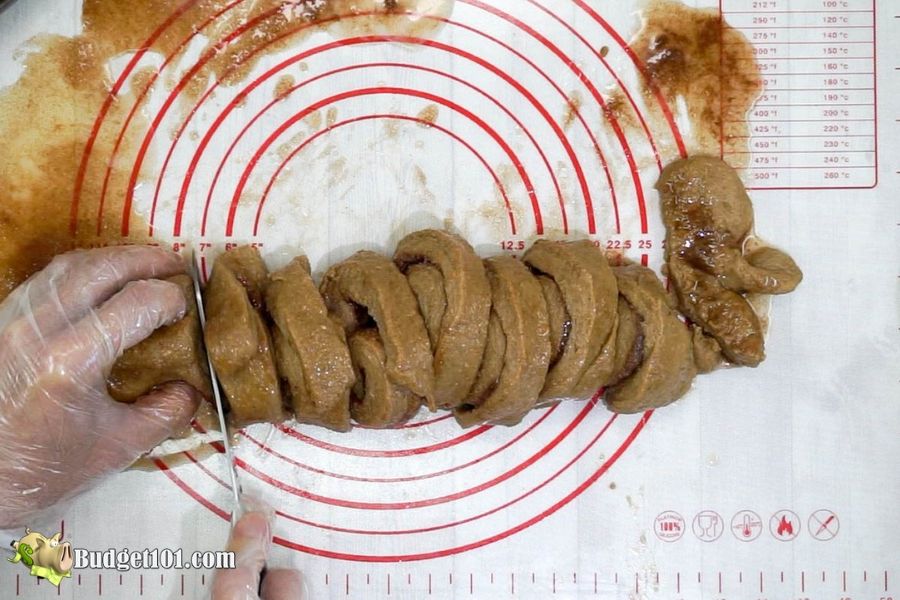 Place them into a 9″x13″ baking dish that has been lined with parchment paper. 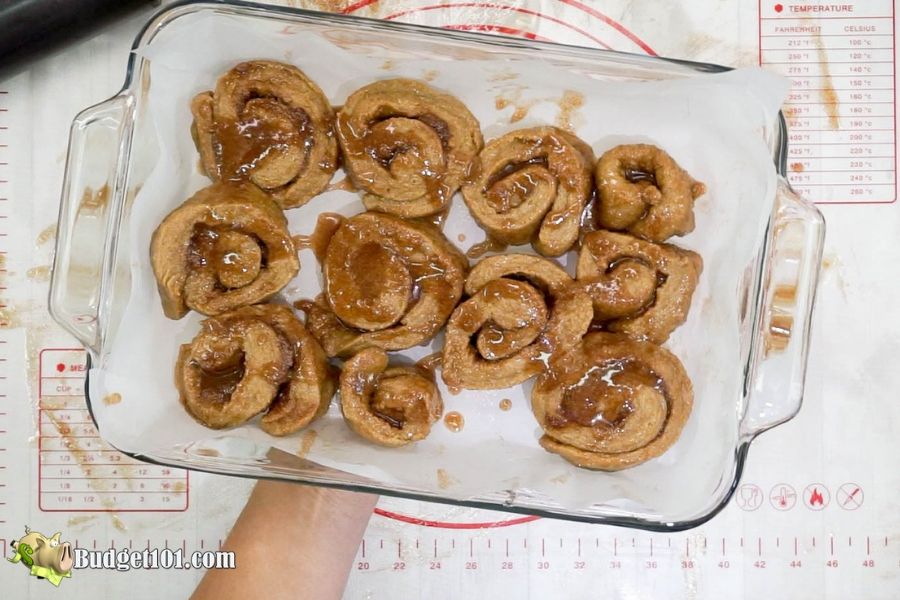 Cover them with plastic wrap (spritz the plastic wrap with olive oil using a Misto to keep the wrap from sticking to the cinnamon rolls as they rise).

Place them in a warm, draft-free area to rise for 45 minutes. 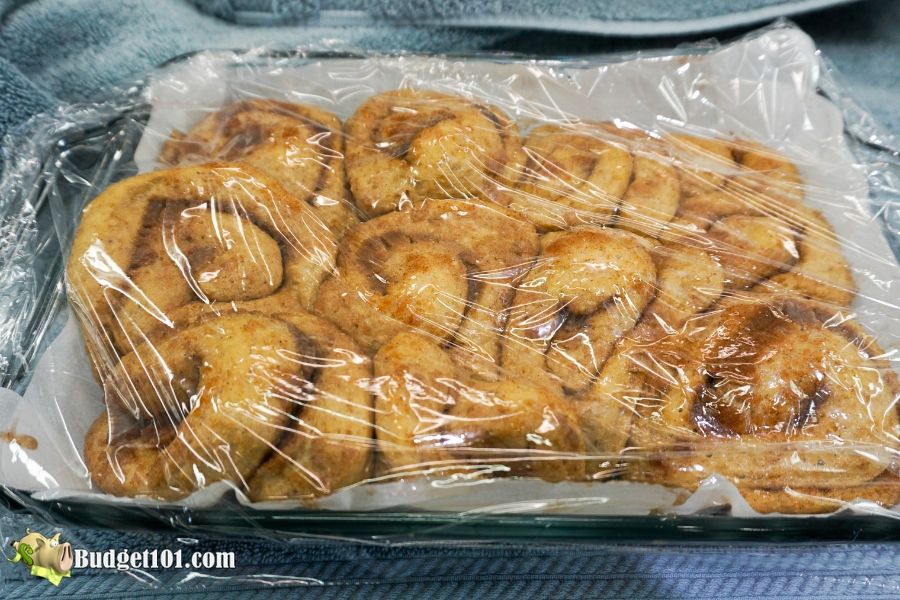 Preheat the oven, remove the plastic wrap and bake them! 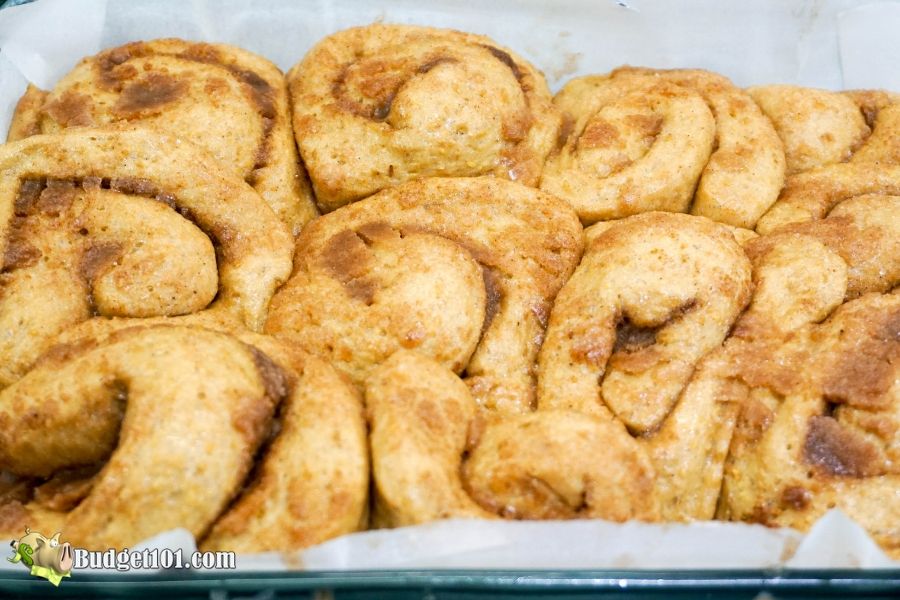 Once they come out of the oven you can opt to frost them, if you’d like with the maple nut cream frosting recipe we’ve provided below.

Middle of the Cinnamon Rolls

1 ounce of walnuts, measured, then finely chop (This adds 2 net carbs to the entire batch)

In a medium bowl, weigh and combine the oat fiber, flaxseed meal, vital wheat gluten, powdered sweetener, cinnamon and xanthan gum. Mix the dry ingredients to combine and set aside.

In the bowl of a stand mixer (such as a KitchenAid) Combine the warm water (ensure the water temperature is 100°-110°F) and honey, stirring well to ensure the honey is fully dissolved. Stir in the yeast, cover the bowl and let it proof about 6-8 minutes.

In the meantime mix the eggs and melted butter together.

In a small bowl, combine the sweetener and cinnamon listed under “middle of the cinnamon roll”.

Overturn the dough onto a work surface. We use a non-stick silicone pastry mat.  Lightly butter your hands to keep the dough from sticking and spread the dough out into a rectangle. It’s going to continue to “bounce” back, which is entirely normal for a yeast dough, just do the best you can.

Spread the butter out all over the dough, then spread the sweetened cinnamon mixture. Roll the dough into a log and cut into 1/2-3/4″ thick slices. Place in a 9×13 baking dish that has been lined with parchment paper. Cover with saran wrap (lightly spritz the dough side of the wrap with non-stick cooking spray).

Place in a draft-free spot and let it rise for 45 minutes to an hour. Preheat oven to 375°F

While it’s baking prepare the frosting if desired. If you don’t happen to like maple or have maple extract on hand you can use vanilla extract in its place.

Tricks for Getting the Perfect Rise

The trick to getting it to rise is to keep it in an entirely draft-free place while it’s rising. Though it’s yeast, it lacks the normal flours necessary for a rise.

Preheat your oven to 150F while you’re preparing the dough. Immediately shut the oven off, insert a loaf pan half full of HOT water onto the bottom rack and then place your dough in glass or metal bowl that has been lightly misted with olive oil and covered with a clean lint-free cheesecloth or cotton cloth.

I adapted this recipe from our keto yeast bread recipe here. 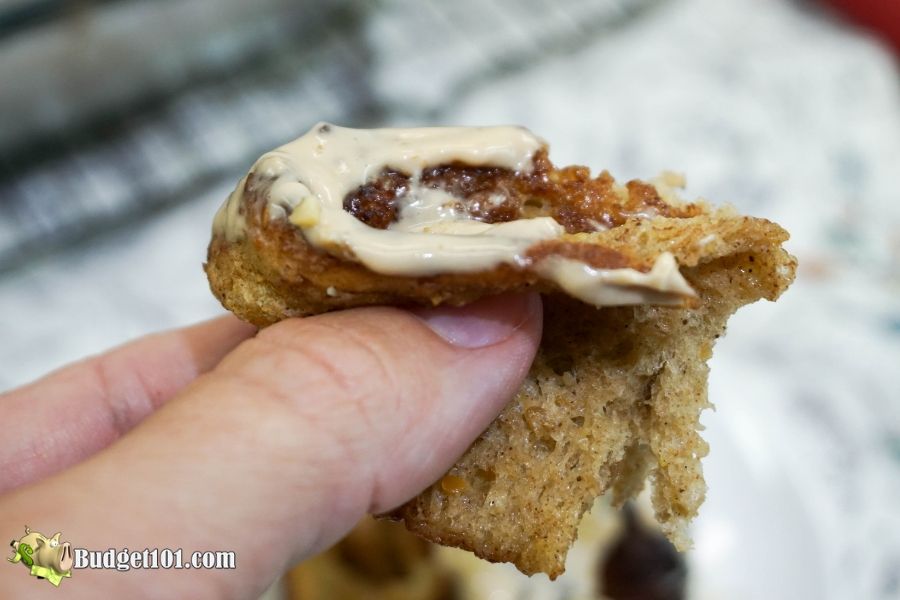 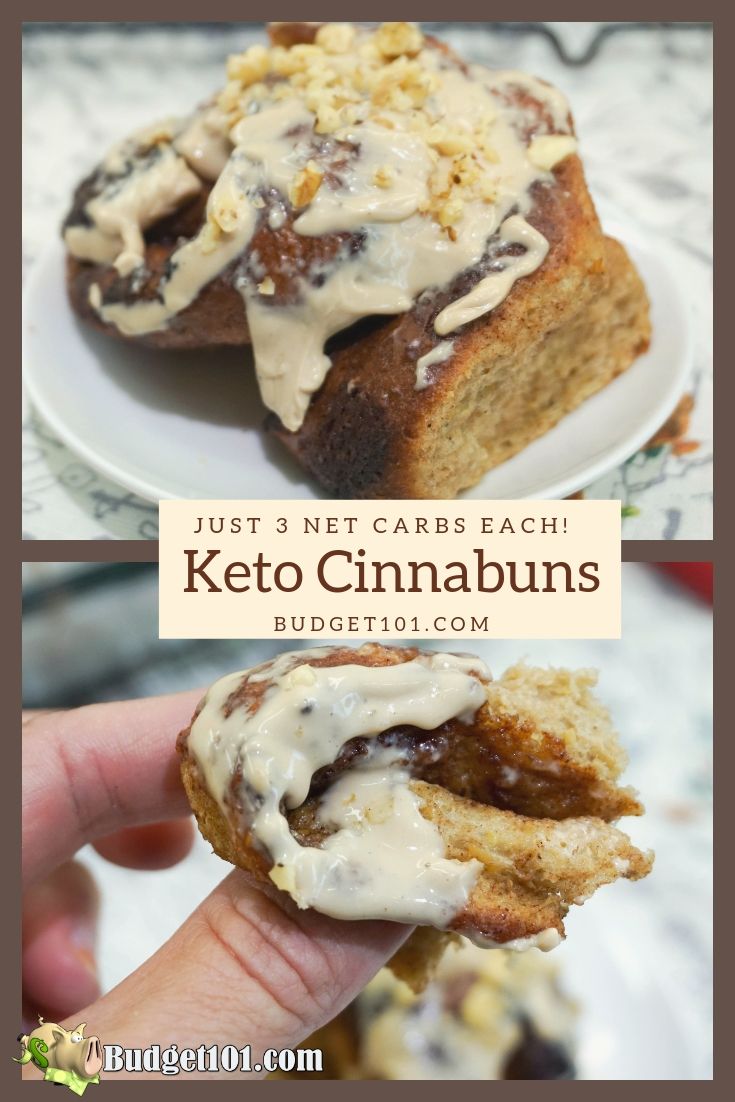 2 thoughts on “Keto Cinnabuns of Steel”