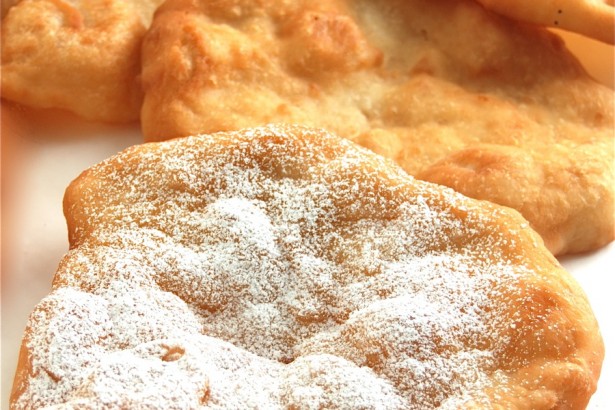 Fair foods are the things that memories are made of, summer festivals and gatherings with delectable morsels that you have a tendency to eat just once or twice per year. However, as we age, we have a tendency to forgo those fun little carnivals with their delicious tempting smells. Here’s how you can still enjoy the flavor, without the $5-8 price tag…

However, upon visiting other areas of the country, I’ve seen them called Navajo Fry Bread, Cinnamon Sugar pull apart bread, Fried Dough, Johnnie Cakes, Zeppolli, Beaver Tails, bannock or even sopapilla. No matter what you call it in your area, we called it DELICIOUS!

In a large bowl sift the flour, salt, powdered milk and baking powder together. Add the water, all at once and stir gently with a fork until the dough forms.

Coat your hands with flour and mix the dough to form a ball. Be sure to incorporate all the flour, but avoid over-handling the dough or kneading it. You want the dough to remain light and fluffy, kneading will cause a heavy, dense dough. The inside of the dough ball should still be sticky after it is formed, while the outside will be well floured.

Divide the dough into four (4) equal pieces. Gently stretch the dough into a disk shape using your well-floured hands. It should be approximately 5″x7″ in size. It doesn’t need to be round.

In a fryer or heavy pot heat a couple inches of vegetable oil to 350F on a Thermometer. Do not fry in oil that is below this temperature as it will absorb into the fry bread rather than cooking the fry bread, resulting in a heavy greasy bread.

Deep fry until golden brown, flip and fry the other side. This takes but just a moment, do not overcook and do not flip more than once. Drain for a moment on paper towels and rub lightly with softened butter, dust with powdered sugar & cinnamon. Scrumptious!