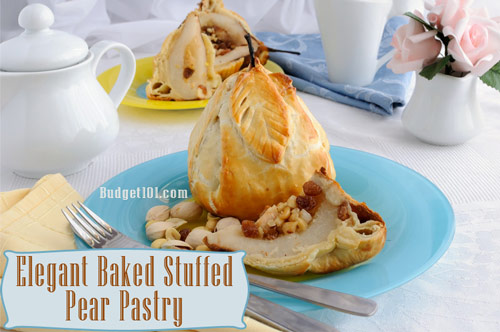 This elegant baked pear is wrapped in a light flaky crust that’s as easy as pie to throw together!

These can be made stuffed or remain un-stuffed, whichever you prefer. Following a dinner party, we prefer to serve the stuffed versions and the filling can be altered in a number of ways. Use craisins instead of raisins, or try different varieties of nuts, add a dash of cardamom or clove.

This recipe is very inexpensive when pears are in season, a homemade pie crust costs less than .50 to prepare.

Now for the directions:

If at all possible, Poach pear in wine (of your choice) for 10 minutes and drain. If you don’t like wine or would prefer a non-alcoholic choice, poach pears in Cranberry Juice with 1/4 tsp cinnamon added to the juice. This really brings out the flavor and shouldn’t be skipped, but if you’re REALLY in a hurry to throw a dessert together, the poaching can be skipped.

Center the pear on the pie crust dough, place a tablespoon of butter on the crust at the base of the pear.

Sprinkle generously with cinnamon/brown sugar and wrap crust around pear to shape. If you’d like, cut out a couple of leaf shaped pieces of dough and affix them to the top to give it a little flare.

Brush with egg wash, sprinkle with granulated or sanding sugar.

Bake at 425 degrees for 40 minutes until crust is golden brown.

Alternative Recipe: If you’d prefer the centers of the pears to be filled, after you poach the pears, slice them in half, hollow out the centers and fill them with about 1 1/2 Tbs of the stuffing mixture.

Press the pear back together and hold it closed while you wrap the pastry around it tightly and bake as directed above.