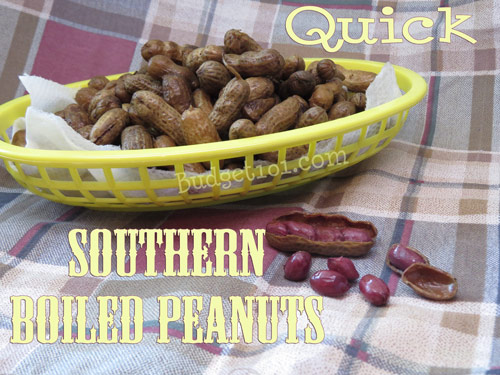 If you’re from the south or if you’ve visited the South during the summer months, you’ve probably seen numerous signs or stands on the roadsides offering ‘Boiled Peanuts”. They are a southern staple at tailgating events, potlucks, gatherings, beach parties and more.

Having grown up in New England, we were familiar with lightly salted ROASTED peanuts (in the shell), which crackled deliciously when you bit into them offering a crunchy rich nutty explosion of flavor in your mouth. This “boiled peanut” thing was new to us… and I was hesitant to give them a try. We implored as to how you’re supposed to eat them, meaning, do you pop the entire thing in your mouth, shell and all or do you peel the shells off, etc. We were told to eat them shell and all.

I popped one into my mouth, not sure what to expect, my tongue was instantly met with a mushy, salty, non-peanut flavor experience that I couldn’t even begin to describe, nor spit out fast enough. Six long years would pass before I’d even attempt another taste test when our gracious neighbor cooked a lovely batch of REAL Southern Boiled peanuts and brought them to a gathering of friends.

Her peanuts looked firm, the shells were not mushy, they glistened with seasoning and had a lovely aroma. We watched them SHELL the peanuts and munch the little morsels inside. Hmmm…. So, with hesitation, we tried again and this time, our taste buds were met with a delightful seasoned treat, slightly firm, yet soft peanuts. Before we realized it, we’d eaten several handfuls!

Now comes the difficult part… how to prepare them yourself. Except that they aren’t difficult at all, they just take a bit of time to cook. Not being particularly patient, I wondered if they could be cooked in a pressure cooker instead. They Can!

Luckily, in the south, fresh green peanuts run from .50 a pound to $1.25 a pound from July through the end of August, so this is a fairly cheap snack to make for a crowd.

Here’s my “Yankified” version aka FAST of “Southern Boiled Peanuts”

You’ll Need:
A Pressure Cooker(or Crockpot/Slow Cooker)
Water
1 c. Sea Salt
3 Tbs Old Bay Seasoning
3 – 4#’s Raw (Green) Peanuts in the Shell- mind you, the peanuts are not literally “Green”, they’re considered to be Green because they are Raw.

Wash the peanut thoroughly and discard any that might be moldy. Place them in the pressure cooker (we use a Maximatic digital pressure cooker) with just enough water to cover them. Sprinkle 1 cup of salt over the top, add 3 Tbs of Old Bay Seasoning and mix them well.

Set the pressure cooker for 30 minutes, process. Allow it to naturally release the pressure on its own, or, alternatively, if you’re in a hurry, just release the quick release valve, allow it to depressurize and then open the lid. 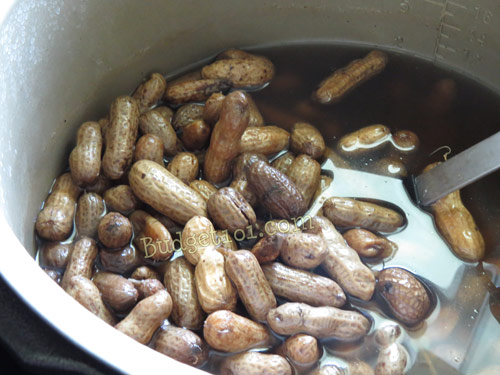 Stir the peanuts, taste test to ensure they are the texture you prefer. If not, cook them an additional 10 minutes. We prefer them to be soft but Not mushy.

Slow cooker method, follow the above instructions except using the slow-cooker. Set them on high for 6-8 hours.