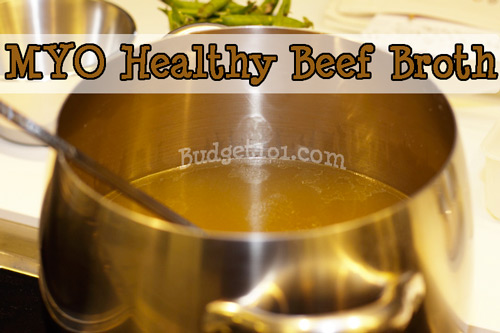 Homemade beef broth is incredibly healthy for your body. There is no comparison to the store-bought versions which often contain MSG or other chemicals and which lack gelatin and some of the other health-boosting properties of homemade broth. Did you know that making beef broth is a simple 4 step process?

Broth (or technically, stock) is a mineral rich infusion made by boiling bones of healthy animals with vegetables, herbs, and spices. You’ll find a large stock pot of broth/stock simmering in the kitchen of almost every 5-star restaurant for its great culinary uses and unparalleled flavor, but it is also a powerful health tonic that you can add to your family’s diet.

Broth is a traditional food that your grandmother likely made often (and if not, your great-grandmother definitely did). Many societies around the world still consume broth regularly as it is a cheap and highly nutrient dense food.
It can be made from the bones of beef, bison, lamb, poultry, or fish, and vegetables and spices are often added.

WHERE TO FIND THE BONES?

Making chicken broth is a fairly common practice, but making your own beef broth is a much trickier process for the frugal minded. Chicken naturally comes with bones intact with a whole chicken. For a cow, however, most affordable cuts of meat come without the bones.

So how to find the bones for affordable beef broth? Try these options…

**(my local butcher charges $1.09/lb. And the bones are from grass-fed, hormone and antibiotic free beef. I can handle that price. I was shocked it was that inexpensive. I still can’t afford the beef but I can afford the bones at least.)

HOW TO MAKE BONE BROTH

You’ll Need:
2 pounds (or more) of bones from a healthy source
1 onion
2 carrots
2 stalks of celery
Optional: 1 bunch of parsley, 1 tablespoon or more of sea salt, 1 teaspoon peppercorns, additional herbs or spices to taste. I also add 2 cloves of garlic for the last 30 minutes of cooking.

1. The first step in preparing to make broth is to gather high-quality bones. Depending on the amount of broth needed, aim for 2 pounds of bones per gallon of water. If you are using raw bones, it improves flavor to roast them in the oven first. I place them in a roasting pan and roast for 30 minutes at 350.

2. Place the bones in a large stockpot (I use a 5-gallon pot). Pour water over the bones. Rough chop and add the vegetables (except the parsley and garlic, if using) to the pot. Add any salt, pepper, spices, or herbs, if using. Bring the broth to a boil. Once it has reached a vigorous boil, reduce to a simmer and simmer until done. Beef broth/stock usually takes about 4 to 8 hours.

3. During the first few hours of simmering, you’ll need to remove the impurities that float to the surface. A frothy/foamy layer will form and it can be easily scooped off with a big spoon. Throw this part away. I typically check it every 20 minutes for the first 2 hours to remove this. Grass-fed and healthy animals will produce much less of this than conventional animals.
During the last 30 minutes, add the garlic and parsley, if using.

4. Remove from heat and let cool slightly. Strain using a fine metal strainer or cheesecloth to remove all the bits of bone and vegetables. When cool enough, store in a gallon size glass jar in the fridge for up to 5 days, or freeze for later use.

Homemade Broth/Stock can be used as the liquid in making soups, stews, gravies, sauces, and reductions. It can also be used to saute or roast vegetables.

Especially in the fall and winter, we try to drink at least 1 cup per person per day as a health boost. My favorite way is to heat 8-16 ounces with a little salt and sometimes whisk in an egg until cooked (makes a soup like egg-drop soup).

In times of illness (which doesn’t happen often) you can just drink bone broth until you start feeling better as it supports the body but is very easy to digest so the body’s energy can go to healing. In cases of stomach bugs or vomiting, bone broth often calms the stomach very quickly and helps shorten the duration of the illness.

If you aren’t already, make bone broth a regular part of your kitchen routine. It is health-boosting, inexpensive and easy… you can’t afford not to!
© Can Stock Photo Inc. /chretien 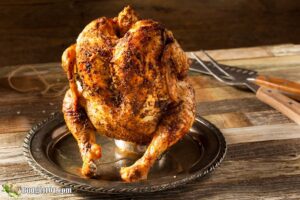