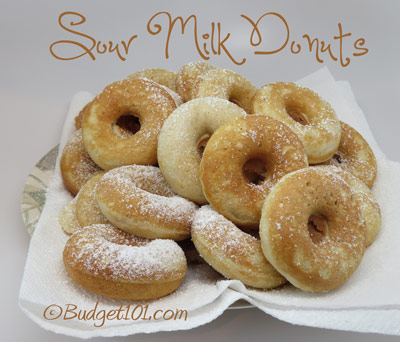 “Don’t cry over spilled milk”, isn’t that how the expression goes? But what is one supposed to do when they grab the milk in the morning, eyes half closed, automatically pouring it into the cereal bowl before realizing that it’s coming out in semi-chunk form? Well, you do what I did, of course, you make Donuts!
If milk doesn’t have a chance to sour in your house, you can make your own soured milk by taking a 1 cup measuring cup, add 1 Tbs white vinegar and then fill to the 1 cup line with milk. Let it rest about 10 minutes prior to using so that it has a chance to clabber. Alternatively, you could use 1 cup of sour cream instead and simply omit the butter from the recipe altogether.

Sift all the dry ingredients together and set aside. In a large mixing bowl beat the eggs until light and fluffy and then add the sugar, half cup at a time, beating on high until well blended and all the sugar is incorporated. Add the milk and butter, mixing lightly. Slowly add the sifted dry ingredients until fully incorporated. Place the dough in the fridge and chill until it’s easy enough to handle. Roll it out on a lightly floured surface and cut with a donut cutter.

Fry in Oil that has reached 375F

These are relatively easy to make, as far as donuts go, but I won’t go so far as to tell you they’re “mess free”.

If you’d rather bake them, Preheat the oven to 350 degrees. Spray 2 doughnut pans well, fill the pan as directed and bake 15-17 minutes. 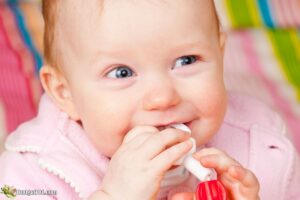