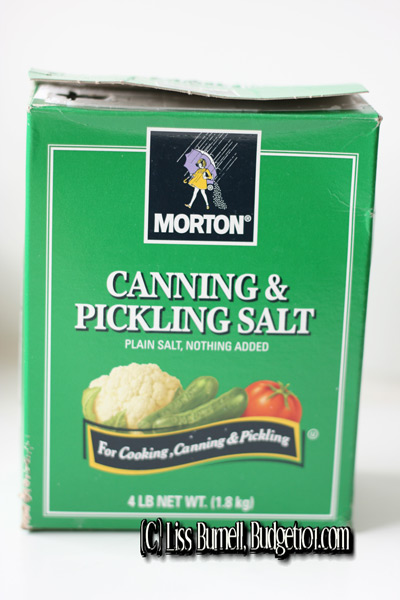 If you like to home can your own fruits and veggies, chances are you’re familiar with Pickling Salt. Unfortunately, pickling salt is often pretty difficult to find during the off season. Here is a bit of info that may help you out with your favorite recipe including what you can and Can’t substitute for pickling salt!

First, there really isn’t a substitute for Pickling salt. Pickling Salt is actually Kosher Salt, which is a coarse grained salt and does not contain iodine. When you’re canning, pickling salt creates a Brine- which is necessary for storage. Pickling salt does not contain additives like other types of salt. This helps prevent your canned goods from darkening and becoming cloudy.
You cannot use any other salt in place of Kosher Salt/ Pickling Salt. Table salt is NOT a good substitute and should NOT be used.

As I mentioned, pickling salt is often only available during the summer/fall months, when canning is more prevalent. It is often found in the canning aisles and seasonal aisles of big box stores such as Target or Wal-mart. In addition many smaller hardware stores carry it year round, although generally it’s pricier at these locations.

It’s often cheaper to buy Kosher Salt, rather than “pickling salt”, as is the case here on Amazon where pickling salt is $8.49 for 32 ozversus only $2.44 for 48 oz for Kosher Salt.