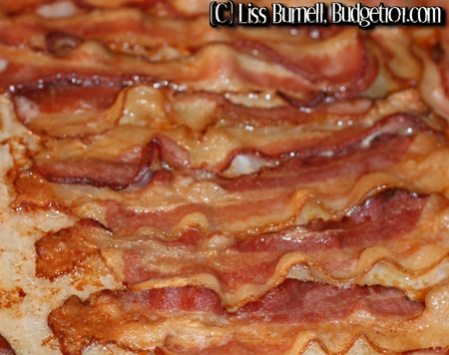 How to Cook Perfect Bacon Every time

Cooking bacon on the stovetop using the traditional method is a pain, the grease splatters, it seems as though it takes forever. However, there are a couple of tricks that will ensure you have perfect tender-crisp bacon, whether you choose to bake or fry!

Here’s a great tip that I picked up while working in a restaurant as a teen to make perfectly cooked bacon every time, with no messy clean-up! It’s my favorite method, particularly since we tend to cook several pounds of bacon at once.

How to Bake Bacon Perfectly

There are so many reasons that cooking bacon in the oven makes it the best method for achieving perfect bacon. The bacon cooks evenly, without splattering grease. The strips remain nice and straight, they don’t curl up. Several pans can be cooked at a time, which is wonderful if you’re feeding a large family. Probably the best part is that you’re completely free to do other things while the bacon cooks, you don’t have to babysit it or turn it over.

You’ll notice that the baking time varies considerably from 12-17 minutes, due to the thickness of the bacon and the level of crispness that you personally desire.

Lay out the bacon in strips very close together, but not overlapping. Bake for 12-17 minutes, or until bacon is perfectly browned to your liking.

Immediately transfer the hot, crispy bacon onto a plate lined with paper towels to drain off any residual grease.

Once the bacon has been removed, I very carefully tip the pan to allow the fat to drain off into a ceramic coffee mug (to be reserved for later use!).

Let the pans cool, toss out the parchment paper or tin foil and voila, mess-free, perfectly cooked crispy bacon. This works great if you want quick breakfasts in the morning, you can reheat the bacon in a small frying pan or in the microwave for about 15 seconds. Crisp and tasty!

How to Fry Bacon Perfectly

If you’re more of a traditionalist (or maybe you’re camping and don’t have an oven!), here’s how to cook bacon in a skillet to achieve the perfect crisp and tender texture instead of dry and crumbly.

The trick that really makes the difference is allowing the bacon to come to room temperature first. Then lay the strips in a cold skillet, side by side. Cover with water.

Drain on a plate lined with paper towels.

The reason this works so well is that by the time the water reaches its boiling point of 212°F the fat in the bacon is completely rendered, which helps prevent the meat from burning (while you’re waiting for the fat to cook off).

The resulting bacon is plump and crisp, rather than tough or brittle.

How to Cook Bacon So It's Crispy, Tender, and the Most Perfect Ever

20 thoughts on “How to Make Perfect Bacon Everytime”