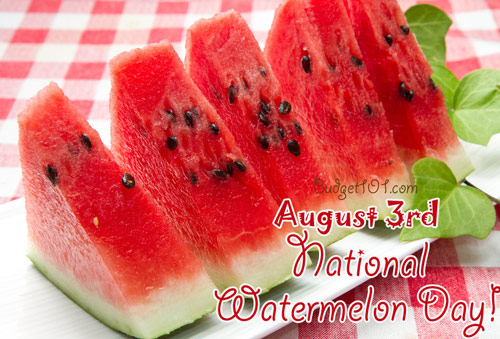 August 3rd is National watermelon day. Everybody loves a slice of watermelon on a hot summer day. Oddly enough, watermelon is a berry not a melon…..

It’s almost as weird as a tomato being a fruit. Watermelon has been around for thousands of years, with over 1,200 different varieties . These fruits can be used for so many different things from drinks to deserts. Every part of a watermelon is edible, yes even the rinds and seeds.

Watermelon have been used in almost everything from smoothies to fruit salads to punch bowls. They were even used as canteens by early explorers.

When I think of watermelon I think of BBQ’s and large plates of sliced melon. Though it can make a huge mess very easily if you just start hacking into it. If you want to minimize your mess and get the most out of your watermelon slice your giant berry in half. Once your watermelon has been cut in half lay it down flat. Now cut your watermelon into cubes, almost like you would dice an onion. When you are done you should have cubes of watermelon with a small piece of rind you can use to hold onto it.

But why limit yourself to just the fruit, the rind can be made into a pickle that taste absolutely amazing. Watermelon rind pickles , not only can the rind be made into pickles but the seeds can be roasted like pumpkin seeds and eaten. Not only can you eat every part of a watermelon , the fruit itself can be used in almost anything. Of the many things you can use watermelon for, I love watermelon ice cubes. All you need is:

Its really easy to make, just throw your watermelon into a blender and blend the fruit until it has no more chunks. Pour the fruit into your ice cube trays and freeze. Once it is done freezing throw a few of your watermelon cubes into a glass of lemonade.

As if those ideas weren’t delicious enough, you an also carve watermelon much like pumpkins to create intricate designs, perfect for edible centerpieces at summertime parties.
© Can Stock Photo Inc. / lsantilli