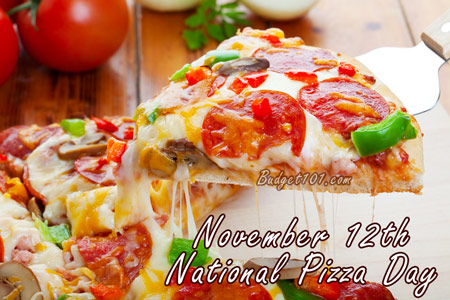 November 12 is National pizza with the Works Except Anchovies Day! Yes…

without anchovies, because who really wants to spoil a pizza with fancy little fish. It is not because they are terrible little fish, they are actually quite popular, however because of how they are packaged to keep them fresh they have a very strong overpowering taste.
Now the history of National pizza with the works except anchovy’s day, or national pizza day for short, is unknown making it one of many unofficial national food holidays. However, the history of the pizza alone has earned this American favorite a place on our calendar. Pizza first started out in ancient times with people adding simple ingredients to the top of the bread to make it taste better.

As this treat moved through the ages it was not until the late 18th century that tomatoes sauce was added to pizza because people feared that it was poisonous. The rich would serve the tomatoes on pewter plates and the tomatoes would leach the lead into it and when eaten would give the rich lead poison. So the tomato was feared for over 200 years! Luckily, the truth was revealed and the modern day pizza is almost here

Pizza first came to America in 1905 in a small pizza shop in New York. Since that fateful day, people have enjoyed hundreds of thousands of pizzas all across America. Not only in America, on average 5 billion pizzas are sold every year.
So this year for national pizza day grab a slice or two of your favorite pizza and enjoy. Better yet, go all out and make yourself a homemade pizza. If you do not have a bunch of time, make English muffin pizza.

The hand motion for the cheese throwing is important. The more elaborate the motion is the more fun you will have making your pizza. After an elaborate handful of cheese is added, put the rest of your toppings on. Go ahead and make a face with your toppings, it’s ok to play with your food. Throw your mini pizza into the oven for 8-10 minutes and enjoy.