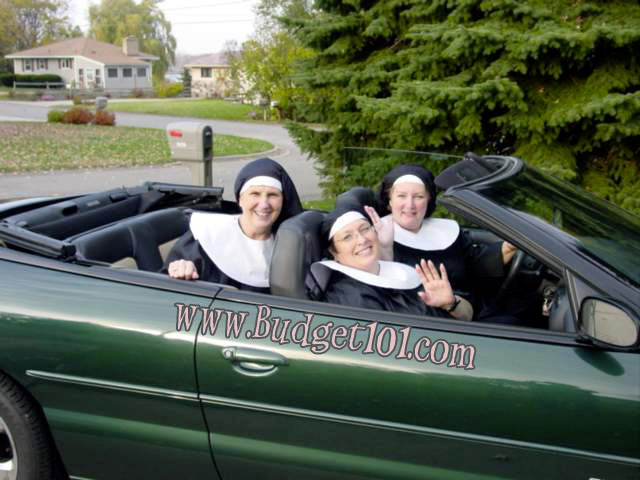 If you’re looking for a quick, inexpensive, easy costume idea for several friends, we’ve got one for you… NUNS!

When I was still teaching 3rd grade my teaching partners and I decided to be nuns for Halloween. They both grew up in Catholic schools and graduated from Catholic colleges. We looked at some pictures of “Sister Act” and decided we could do this! We used our kids ‘ black graduation gowns and then cut out white bulletin board paper for the collar and headband.

The round collar was made by tracing an inverted round wastebasket. The headband was just a strip of paper. We couldn’t figure out what to use for the black veil. Finally we came up with the idea that we could use a black half-slip. We put the headband on and then put the slip over so it covered our hair. It worked great! We also carried very large rulers! (I had heard that nuns used to use rulers to enforce discipline in the classroom) One of my students did not know what we were, so I asked him what he thought we were and he said…”Ummm, Judge Judy?” After the party we drove around in my convertible into the housing developments. Not only did we get some pretty strange looks from adults, but when we saw kids we knew from our classes we told them that they had to get their homework done before they could go trick or treating! We had a blast that Halloween and even the parents loved our costumes!

Black Veil- Instead of a slip You could also use any plain black nylon material such as a pillow case (cut), cheesecloth that is dyed black,