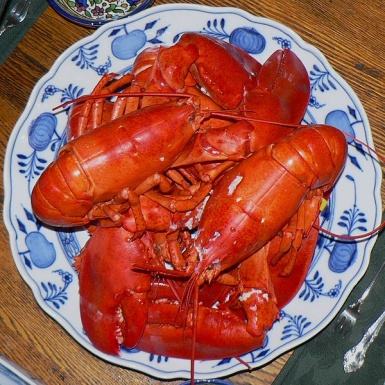 Happy National Lobster Day! Having grown up in New England I have an affinity for Maine Lobster! In a twist of irony this rich and decadent food was once so abundant it was considered a poor mans dish. Here are some amazing facts about lobsters, as well as a recipe for poor mans lobster that might help your craving while staying within your grocery budget. . .

In an ironic twist, lobster is no longer an abundantly frugal dish. As such, we thought we’d share an old Mariners recipe for Poor Man’s Lobster, which is actually a rather tasty substitute for this fabulous crustacean.

In a large frying pan combine the water, salt, minced dried onion, lemon peel and butter over medium heat until it comes to a boil. Add the whitefish and poach until the fish is flaky and cooked throughout. Remove from the water, serve drizzled with melted butter and a baked potato.

While this isn’t lobster, if cooked properly, it offers a rich decadent flavor that can hold a person over until the next opportunity to dine on the real thing!