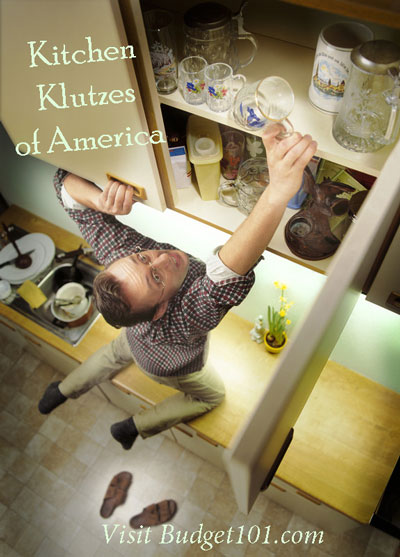 June 13th is National Kitchen Klutzes of America Day aka Don’t cry over spilled milk day! This is a day that honors kitchen maladies, from burnt cookies to accidental addition of the wrong ingredient in the recipe, a day to proudly pronounce to the world, “No, I’m Not Martha Stewart and I’m . . .

Proud to be me!” Whether you’ve accidentally turned the blender on (without securing the cover), stood on the counter to reach a glass and pulled the entire shelf down, or let something boil over on the stove- we’ve all done it.

Check out our recent S’mores Bars– which were created following a rather large mistake of accidentally dumping measured sugar into a large canister of flour, rather than the mixing bowl that it was intended for. We ended up with 4 huge batches of cookie dough in an attempt to salvage the nearly wasted ingredients.

Several months ago our oldest son decided to try to make a homemade smoke bomb recipe he discovered on the internet. We were at work and returned home to an amazingly (unnaturally) clean kitchen that smelled uniquely like burnt strawberry jello. I checked the trash, nothing in it, it had been taken out. The floor had been washed, the stove had been scrubbed spotless, just that unique smell that permeated the entire house. I called our sons into the room and inquired as to what had happened and they answered “nothing” in perfect unison. So I did what any self respecting mother would do, I threatened them, of course. He caved, explained that he tried to cook a homemade smoke bomb recipe, that he wanted to perfect it and that when he added the ingredients to the pan, they began to “expand rapidly” … to the point where my favorite frying pan was now out in the woods behind our house because it had to be removed asap from the kitchen. Ah… the kitchen klutz has struck again.

We thought you might enjoy reading about other people’s funny kitchen fiasco’s as well so were holding a brief contest to help one lucky klutz get OUT of the kitchen!
Simply share your Kitchen Klutz moment in the comments below (or 2 or 3 or 4) and you’ll automatically be entered in a drawing to win Dinner OUT at a Local Restaurant in your area.