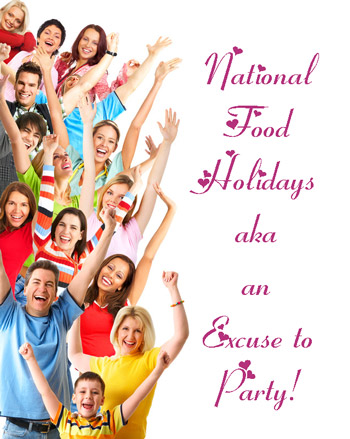 We all know there are National Food Holidays that are celebrated, for instance, National Donut Day which is much more widely known than say, National Caviar Day; But did you know that each and every one of these “National” Food Holidays actually has a rather unique origin.

Who declared these  “National observances”?

You might be wondering who designates these “National” observances . . . well… here’s who:

All “National” observances (months, weeks, days) that are celebrated in the United States are determined by one or more of the following sources:

In any case, these National Food Holidays are a great excuse to try new things, some of these observances create fabulous deals and freebies as a result. Case in point, on National Donut Day, one can get a free donut at more than 10 different locations. In addition to various freebies and samples, these national promotions can help save you money if you plan ahead.

June is National Dairy Month- as such you’ll frequently find great deals on dairy products, cheese, ice cream, yogurt, sour cream (this includes high-value coupons, sales and deals) throughout the month of June. You can read more about sales cycles and what deals to expect on a month by month basis here.

Here are the upcoming observances and national food holidays:

Which national holidays are Your personal fave?