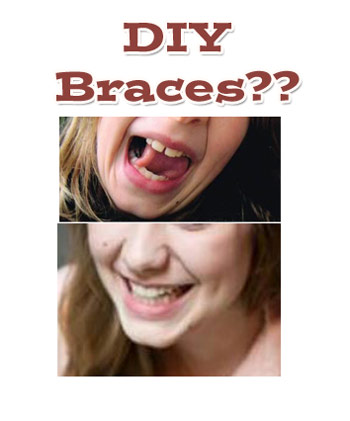 We recently became aware of a trend that teens have caught on to.. DIY Braces!

Everyone knows that dental care is extremely expensive in this country and that dental insurance is often severely lacking in the coverage department. Truth be told, as a kid dental care just wasn’t in the budget in our family. Apparently, a large number of teens are now taking matters into their own hands when it comes to the gaps in their teeth.

They’re literally finding videos online on youtube, much like the one shared below that explains how to use basic rubber bands to close small gaps in the teeth, straightening them without visiting a dentist.

When we first heard of this phenomenon (from one of my kids’ friends) we were floored and didn’t believe it. However, a quick search on youtube and we found a number of viral videos, including this one:

Apparently a large number of teens have resorted to this method.

But is it SAFE?

While this young lady in the video did successfully create her own braces and close the gap in her front teeth, The general consensus is NO.

It’s not safe, nor is it recommended. There are a number of things that could go very wrong.

There is an incredible risk of infection, the risk of detachment between the tooth and gums (which are no longer receiving the support they need).

The rubber band could easily slip out of place, slide up the gums causing detachment (which in turn could lead to the loss of the tooth).

While this could possibly work for smaller gaps, the chance for permanent damage is much to high and you’re better off seeking a licensed orthodontist. For health and safety reasons, some do it yourself ideas just aren’t worth doing yourself.

Would YOU Do It?

Would you ever consider doing something like this? We’d love to hear your thoughts . . .

View More about this Trend here on TODAY