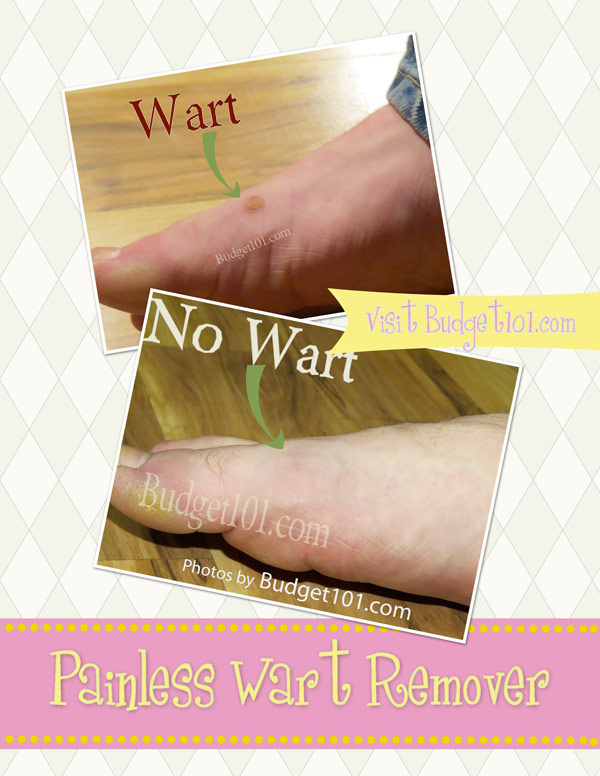 Warts are frequently an unsightly frustration that seems to linger indefinitely. For those afflicted, in addition to being embarrassing, they can also cause pain and discomfort. We discovered how to cure warts painlessly with a common household staple.

There are several different types of warts, each caused by a strain of the human papillomavirus (HPV) which can enter the skin easily through a tiny scratch. The virus causes rapid growth of cells on the outer layer of skin, thereby creating the unsightly wart.

How to Cure Warts Painlessly

The HPV virus is highly contagious and lives on many surfaces including keyboards, doorknobs, floors, countertops, etc. It spreads by a simple handshake. Although there are a number of treatments available, the one we’ve found that works the best & least painfully is as simple as peeling a banana.

Before we begin, lets preface this by saying there are hundreds of strains of HPV, as such, not every remedy is going to work for everyone, which is essentially why most of the store-bought remedies seem to fail for most people.

For this particular wart, we had tried Compound W, freezing the wart, OTC Wart Medicines, about 5 in all, to no avail. The over-the-counter treatments caused itching, severe burning and even pain at the wart, and the skin around the wart had turned white at times, etc but it still wouldn’t budge.

Having tried those painful “remedies” that failed over and over, It took me about 3 months to convince my son to give this painless remedy a try. Finally, exasperated at the whole situation he gave in, rolling his eyes at me when he realized my plan. However, this particular remedy is one that we tried with excellent success and have not had a recurring issue since.

How to Apply the Banana Peel Treatment to Remove Warts Painlessly

Peel a banana, unripe bananas (partially green) seem to work best. (Eat the banana, haha, waste not, want not, right?) Take a knife and scrape the inside of the banana peel. 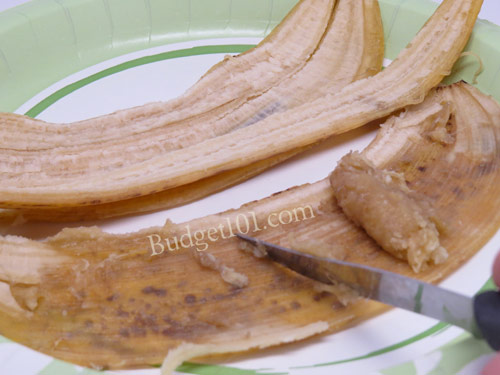 Apply the scraped banana peeling directly to the wart, covering it completely. 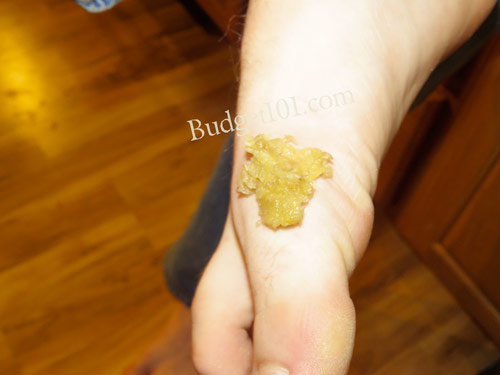 Apply a Waterproof Band-aid or athletic tape to completely cover the wart. 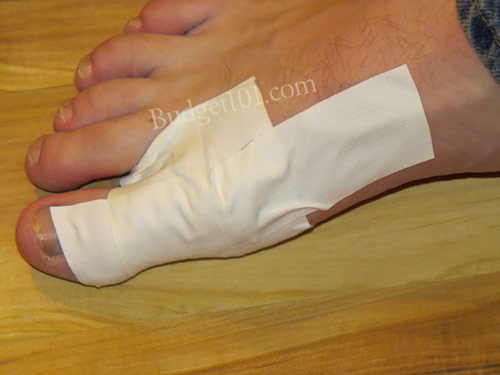 Reapply 2x Daily for 7 days. (Once in the morning, once before bed).

After 3 days the wart had shrunk drastically, about half it’s size. After 10 days, it completely dropped off, with the skin completely healed underneath, no painful “hole” that many seem to experience with other remedies/cures. 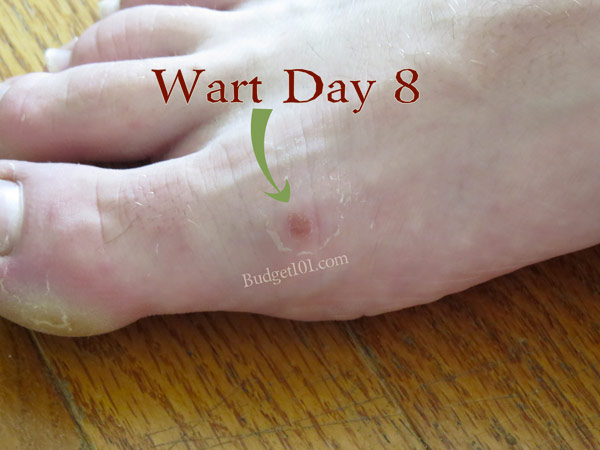 Although We stopped applying treatment after 7 days, the foot was completely healed after 21 days with no scarring. The wart has NOT reappeared. 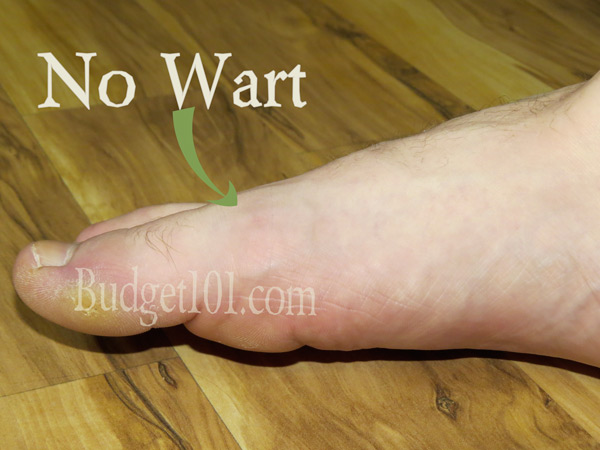 We applied this same technique to a wart that appeared on a finger: (please note that you can tell this is the same person, the same hand due to his scarring on the knuckle, which we’ve marked with a green arrow so you can see it) 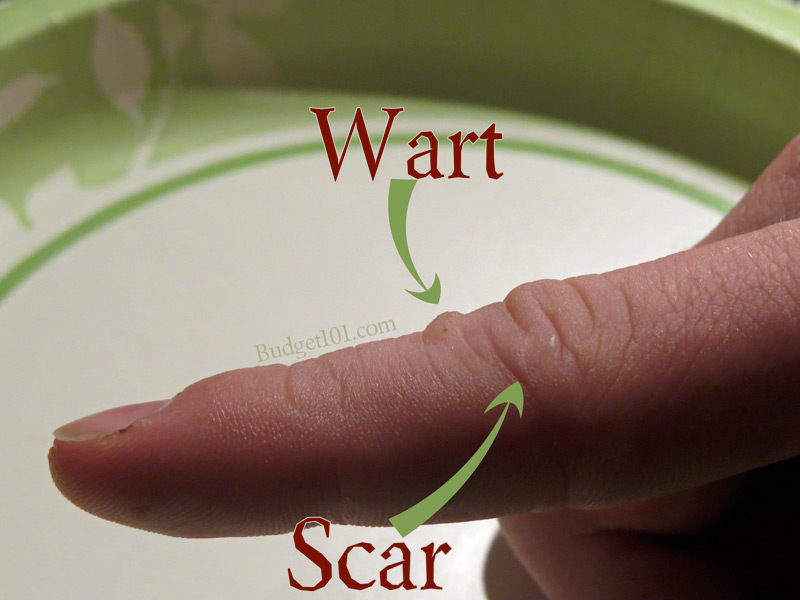 The peel was applied for 10 days, the wart completely shrunk away painlessly. After 21 days here’s what the same finger looked like: (please note that you can tell this is the same person, same hand due to his scarring on the knuckle, which we’ve marked with a green arrow so you can see it) 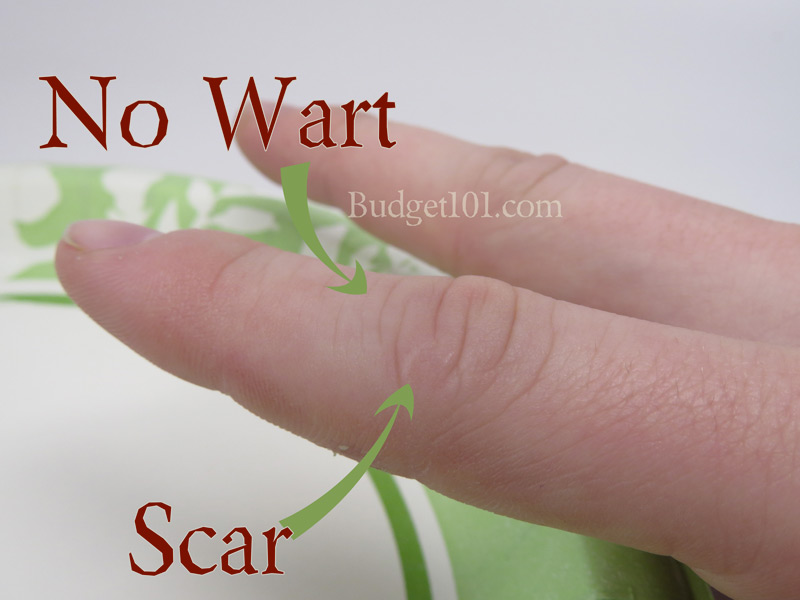 Why Does it Work

We get asked this question a lot. It is rumored that the high levels of potassium fight the HPV, but we couldn’t find any studies to support this notion. As a mom, I don’t give a rats ass why it works, I’m just thrilled that he is finally free of unsightly warts and that the treatment was 100% painless.

Simply find a dandelion flower, pull it up, break the stem and apply the sap liberally to the wart. Cover it completely with the sap. Apply a bandaid. Reapply 2-3x’s per day until the wart disappears.

You’ll probably notice that the wart will turn dark brown or black within a couple of hours, this is perfectly normal. Although this remedy has been touted to work, this one is only available seasonally and the sap does NOT store well for use during the fall and winter months when it’s difficult to find. 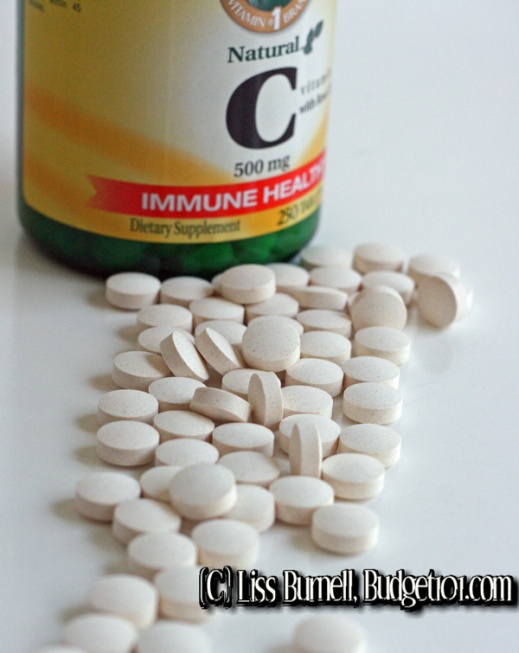 Many of our members have reported substantial success in removing warts at home without harsh chemicals, freezing or over the counter remedies. Here are 2 of the most often submitted natural remedies that members and guests have recommended.

This remedy has been submitted more than 80x’s by members in the past decade, swearing to its effectiveness in wart removal. Just prior to bedtime, coat the skin surrounding the wart with a thin coating of vaseline. (This coating is to protect the surrounding area while the ACV does its magic).

Next, soak a cotton ball liberally in apple cider vinegar and place it directly over the wart, covering the entire wart. Wrap in waterproof medical tape. Remove in the morning. Repeat daily until the wart is no longer present. After 3-5 days you will see that the wart is shrinking and becoming red. The wart will disappear completely within 7 -10 days. (One member reported that she had a Very Large wart and it took 16 days for it to “Fall off”.

Simply crush several tablets, mix with a tiny bit of water to create a “paste” and apply liberally to the wart twice daily.

Do you have a Wart Remedy or Cure to share?

16 thoughts on “How to Cure Warts Painlessly”