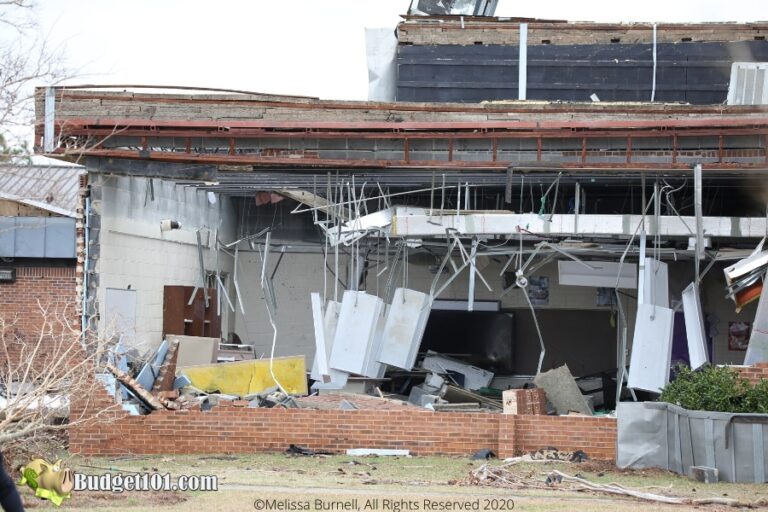 Last night we experienced a tornado too close to home! We live in an area that is prone to both Tornadoes and Hurricanes, so when we received tornado warnings last night, we did was we always do, we went about our evening as though nothing was amiss.

The winds were severe about 10 pm, and I sourly bitched to my other half that I wasn’t looking forward to retrieving my patio furnishings from the neighborhood in the morning.

The radar indicated strong storms, but we appeared to be in the clear, mostly green with a touch of yellow. Nothing here to worry about, right?! 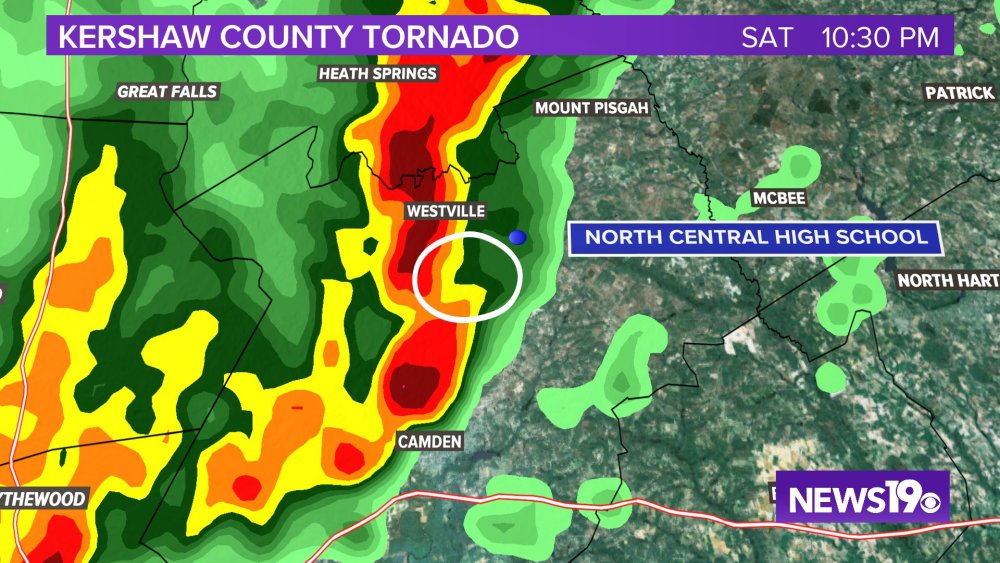 NCHS Tornado Too Close to Home

Imagine my surprise though, when we discovered in the morning that the high school just a couple miles from our house, the one that both our sons graduated from not too long ago, got nailed with an EF-2 tornado with winds at 130 MPH. The damage you’re about to see occurred literally within 1 Minute. 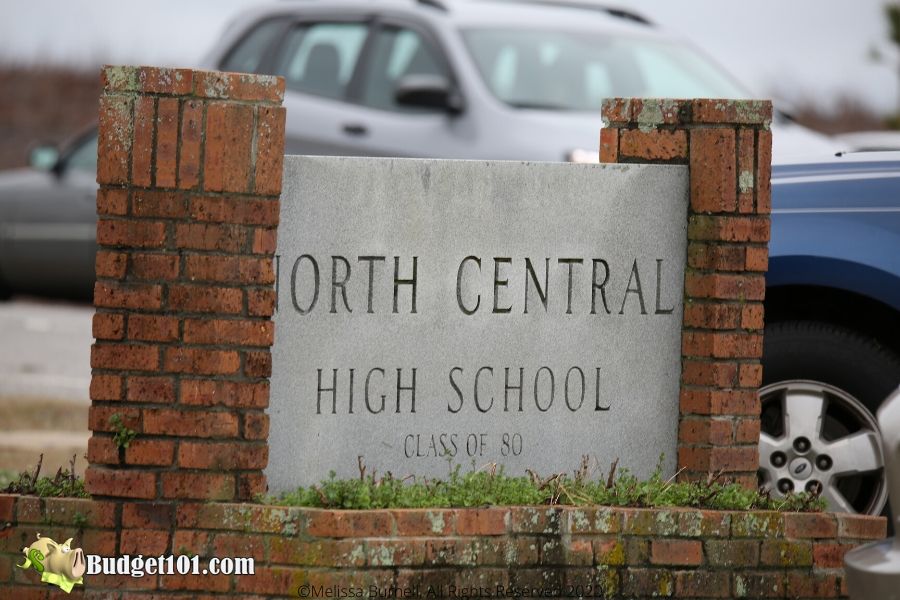 Here is a second video; this footage is of the hallway. When a tornado is imminent during school hours, this is the area students gather to wait it out. As you can see, we were incredibly lucky that the storm hit at night when school was not in session.

JUST IN: Here is some security footage from inside North Central High School when a tornado tore through the school late Saturday night. pic.twitter.com/shipxlhygb

Like most of our community, we headed to the school to assess the damage and see for ourselves the devastation and what lies ahead. This fellow is the schools’ mascot; it’s impressive the Knight is still standing. 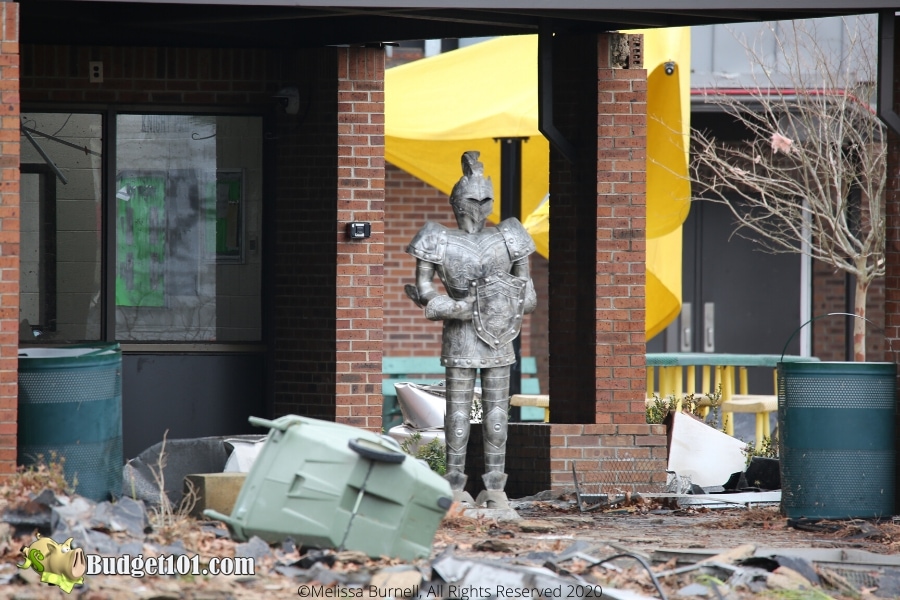 He’s still guarding the front door… amidst the debris. 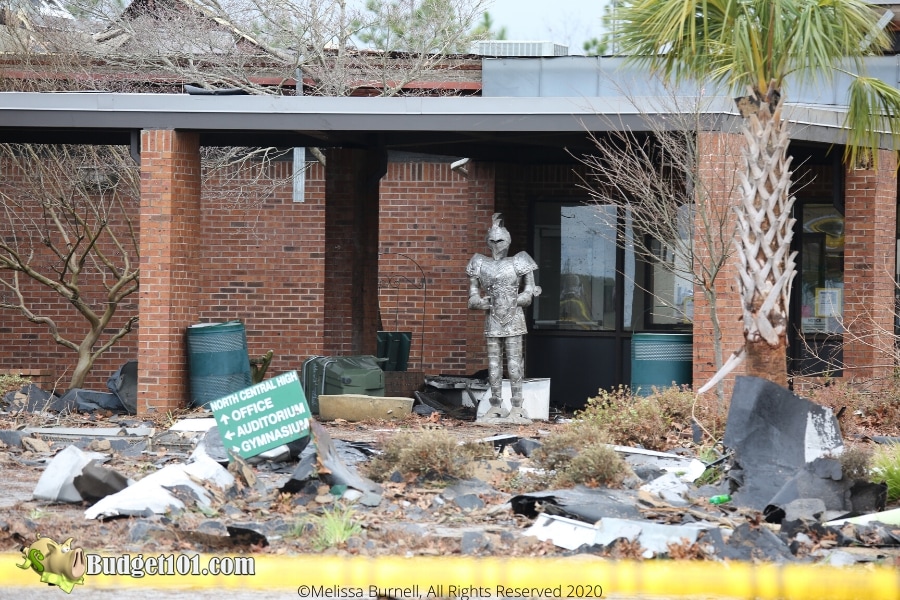 The AC and roofing didn’t fare so well here… 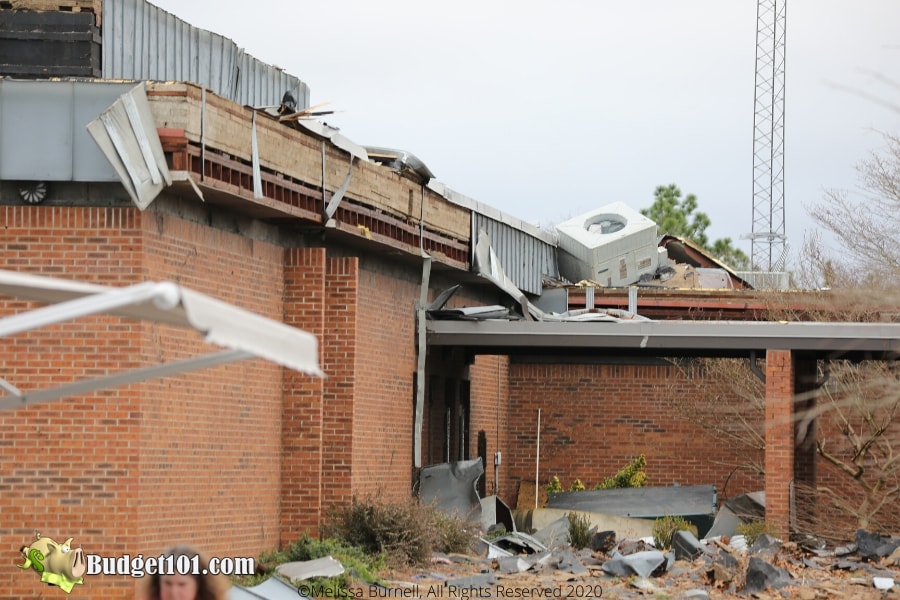 Neither did the covered walkways that protect the students from the elements between the buildings. 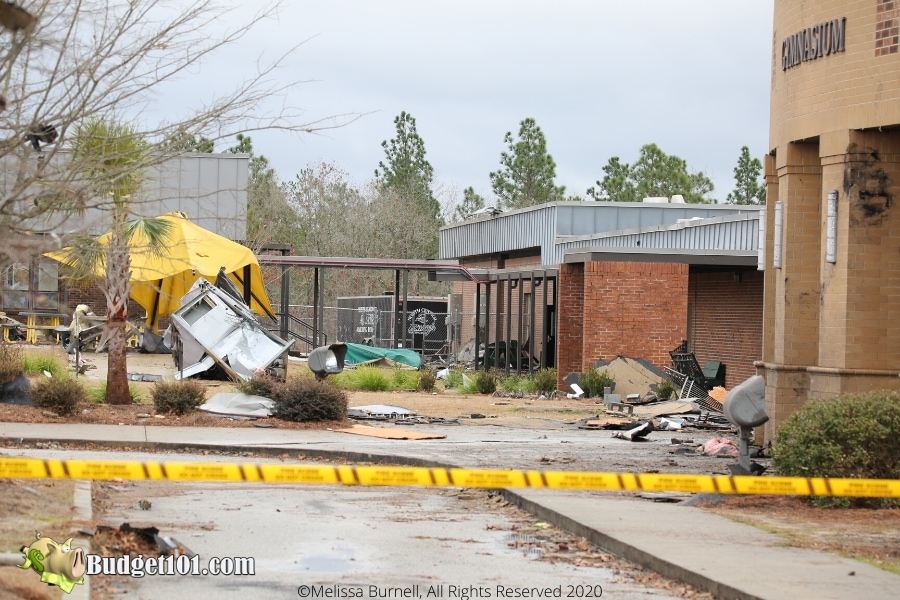 The following photo shows the student drama room . . . not much left of it.. and the English department didn’t fare well either. 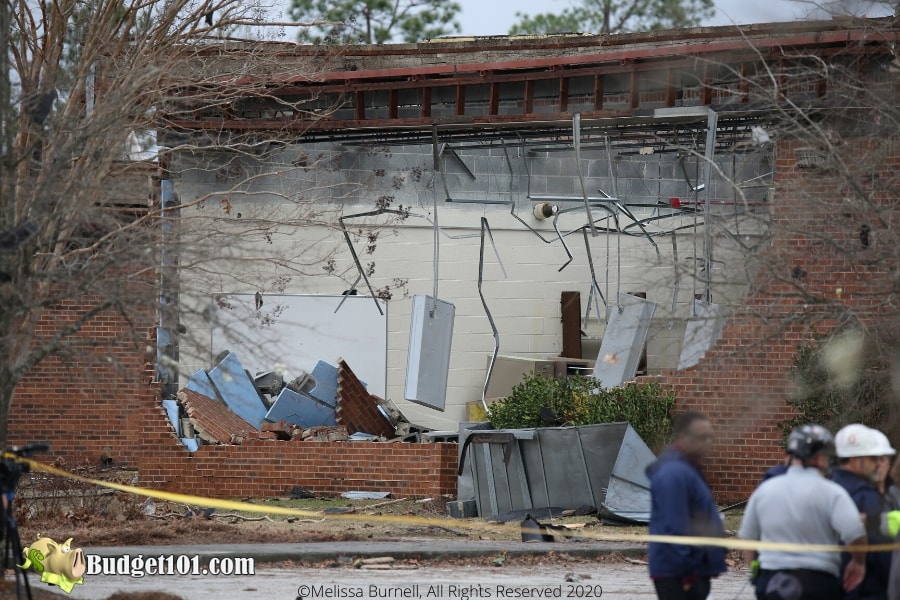 The scene is quite disheartening, to say the very least. 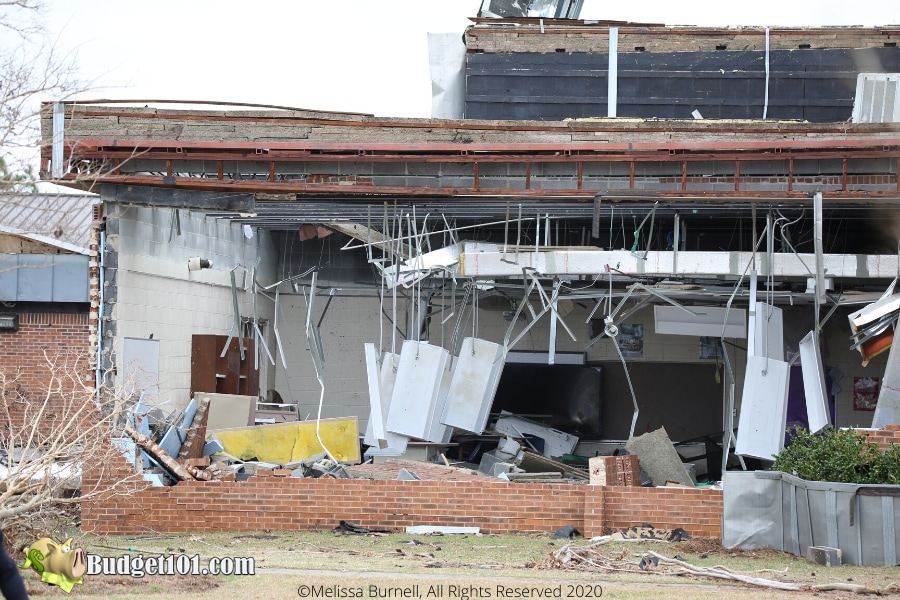 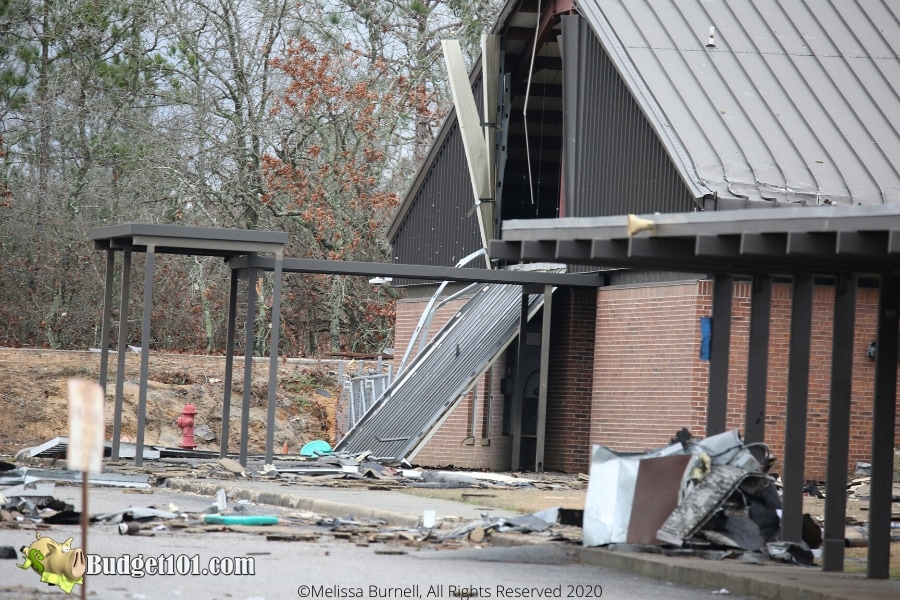 The buses didn’t fare well either, as you can see, a number of them have smashed windshields, crushed from the top from various falling objects. We counted at least eight that are out of commission, but it’s hard to see the real extent of the damage due to the protective barriers put up by local police, fire, and rescue. 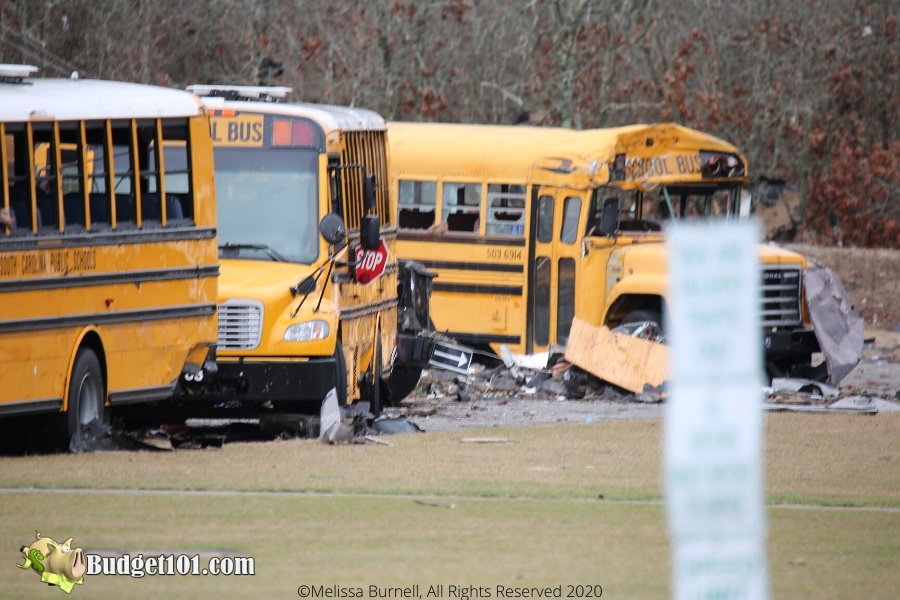 28 of the 30 buses on the lot were damaged. Six have extensive damage and four were totaled.
Source: Wach57 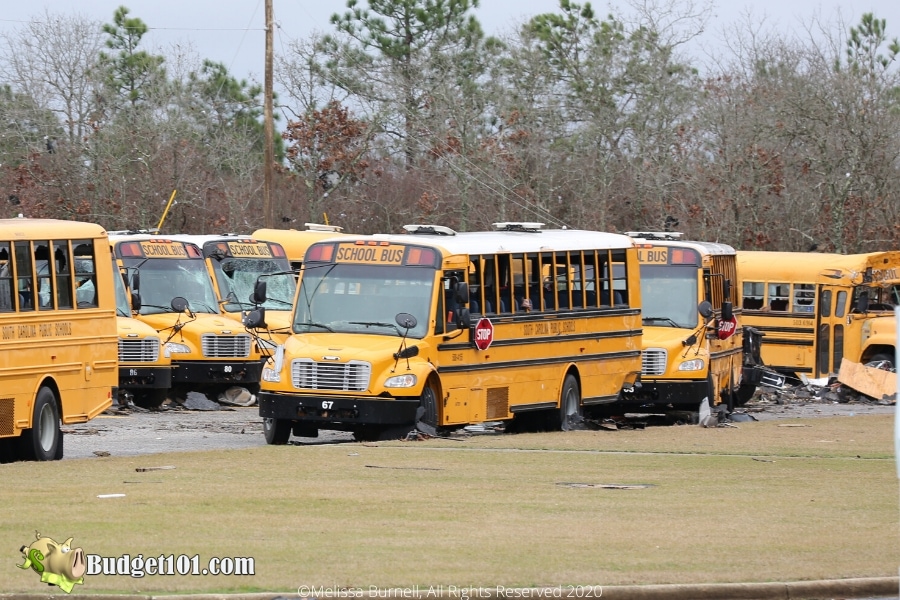 This area, shown below, (was) the sports field bleachers for football, track, and field. Unfortunately, the box area was utterly torn apart and lay in shambles in pieces around the field. 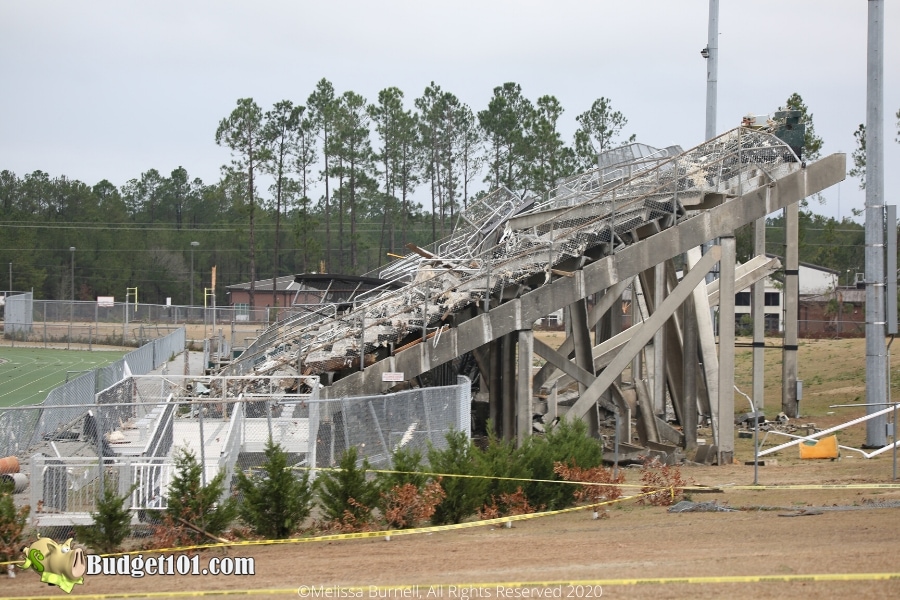 This field, these bleachers is… well, WAS where graduations were held. Here’s a shot of our sons’ graduating class entering the field for commencement. Hard to believe the bleachers that I was standing on in that photo are demolished from a one-minute storm. 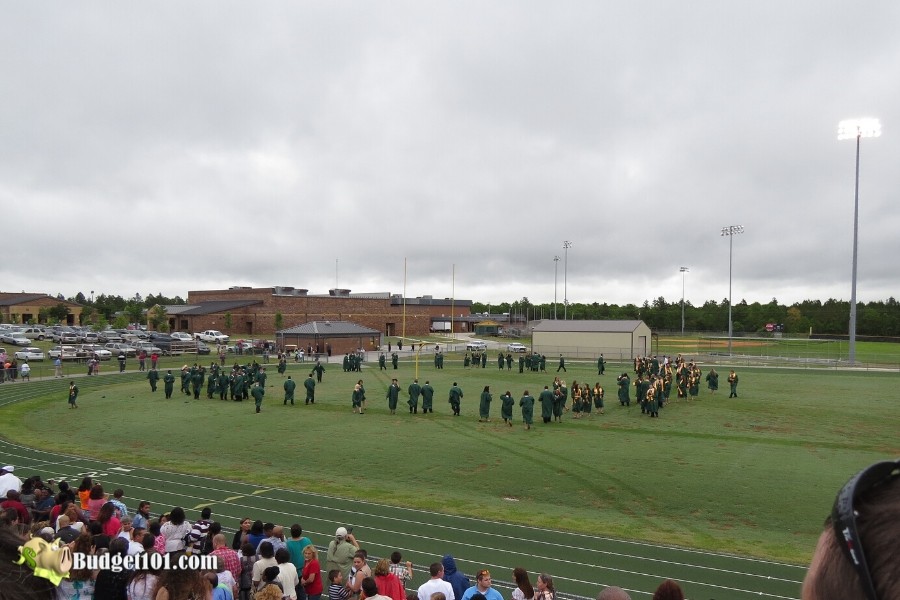 Another view of the concrete bleachers that are destroyed. 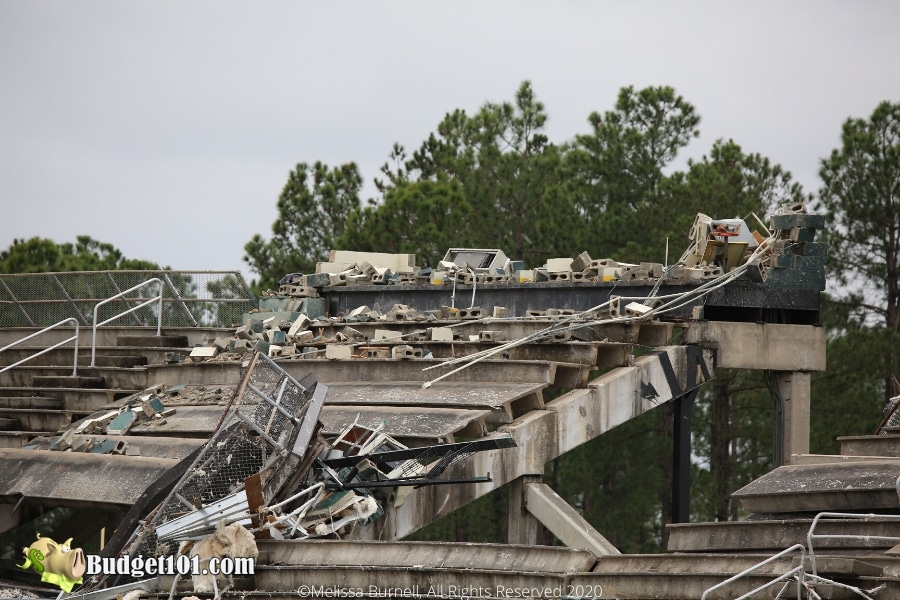 and a third view… 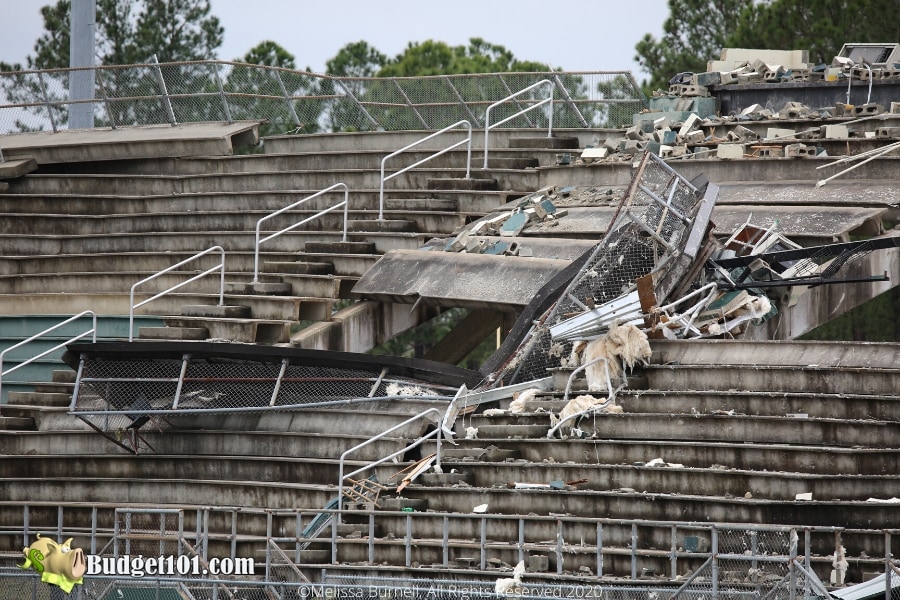 This fencing was around the sports field. In many areas, it looked like it was simply plucked out of the ground, like a child picking dandelions. 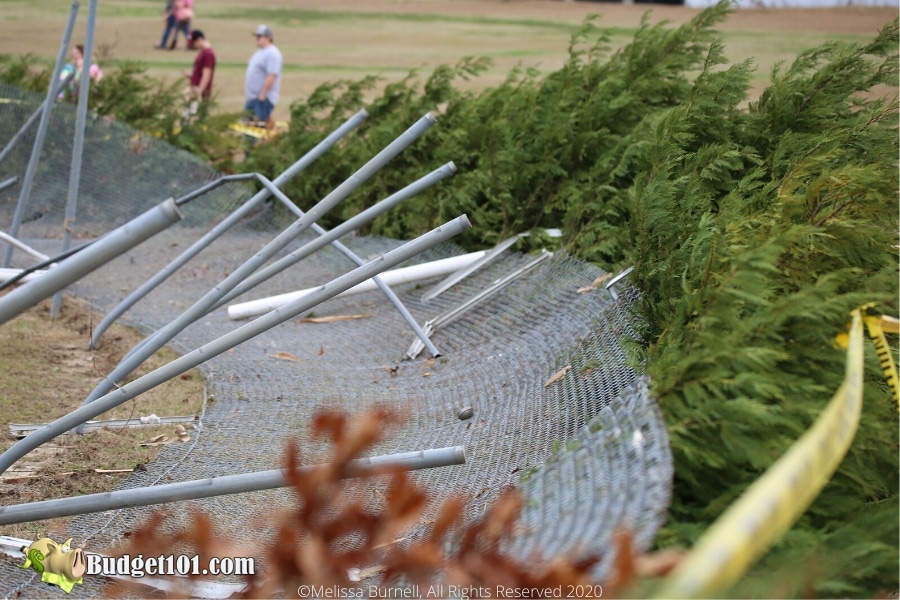 Luckily, the tornado struck overnight and on the weekend, so the school was empty, and no injuries are reported. We’re waiting to see where all the kids will be going to school for the rest of the year.

Right now it is rumored that they will be bused to an old vacant vocational building, but the kids and teachers are in dire need of basic supplies (list provided below)

In the past, we’ve gotten so accustomed to the storm warnings that we stopped heeding them; from now on, we will definitely take them more seriously!! It’s unnerving to see the damage that occurred in literally one minute.

Video Footage from the Top

Students will be moved to an older vocational building, also known as the Atec building.

North Central High School’s central library book vendor has created a Titlewish Online Link for those interested in donating to help restock the library. The company has stated that they will match 10% of all donations and 100% of all donations will go directly to North Central High School’s library account so staff can select the books that meet their needs.