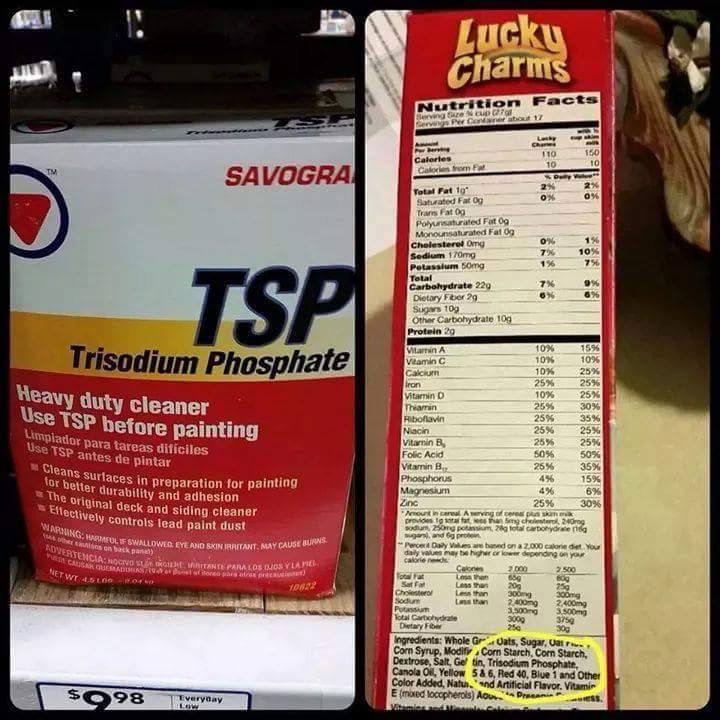 Perhaps you find yourself wondering, like so many have done, why bother making your own when you can buy it at the store for the same price, or sometimes, even cheaper? Maybe you just aren’t aware of what it might REALLY be costing you….

Here’s an example that you might have sitting in your pantry at this moment. It’s a box of Lucky Charms breakfast cereal and if you read the ingredients list on the side of the box you’ll see it contains Trisodium Phosphate (TSP). If you’re not particularly familiar with TSP, it happens to be an industrial cleaner which has recommendations right on the box NOT to handle it with your BARE HANDS. It recommends you use gloves. It’s used to strip surfaces for painting, indeed my husband is a builder and we use TSP to strip off polyurethane and paint prior to refinishing a surface.

You might remember several years back when this particular item was removed from laundry and dish detergents because it is known to cause extensive eutrophicationof lakes and rivers once it enters a water system.

Per the Website In R Food, Trisodium Phosphate has the potential for the following adverse health effects:“The FDA claims that Trisodium phosphate in certain amounts is not a risk in food, but some reports and agencies have deemed it a hazardous substance. The Clean Water Act has taken steps to limit the use of TSP in cleaning supplies because it damages the environment. Phosphates are required of the human body, however trisodium phosphate is an inorganic chemical phosphate. There are other organic sources of necessary phosphates that are proven to be safe and beneficial for consumption.

TSP has not been proven to be toxic to humans as a food additive, but has shown to be severely irritating to the gastric mucosa unless part of a buffered solution.
Trisodium phosphate may reduce accumulation of lactic acid in muscles.
Excess intake of TSP may produce an imbalance of minerals that lead to
loss of calcium from bone and a calcification of the kidneys. The daily
limit of trisodium phosphate is recommended to be 70mg. TSP
consumed as part of a Western junk food diet sometimes reaches upwards
of 500mg, which leads to an increased risk of developing osteoporosis.”

While the FDA states that (TSP) is “Not at Risk in a Food”, the US National Library of Medicine Open Chemistry Database clearly states that it is a skin hazard, ingestion hazard (that can result in abdominal pain, burning sensation, shock or collapse) (source)

It’s also listed as a Chemical danger as it decomposes when heated. (section 10.2.1)

Don’t Take my word for it, Read it for yourself!

Sadly, this chemical is not in JUST Lucky Charms, it’s in a number of foods such as canned soups, processed meat and cheeses, as well as toothpaste, mouthwash, hair coloring and bleaching products and more.

Since the FDA is allowing these sorts of chemicals into our food, we take their recommendations very lightly (actually, we ignore pretty much everything they have to say!) and instead opt to make our own groceries whenever possible. While a product might seem cheap when you purchase it, the long term health affects are very serious and can quite costly. Personally speaking, if I can’t handle the product directly without wearing gloves, I really have no interest in ingesting it either.