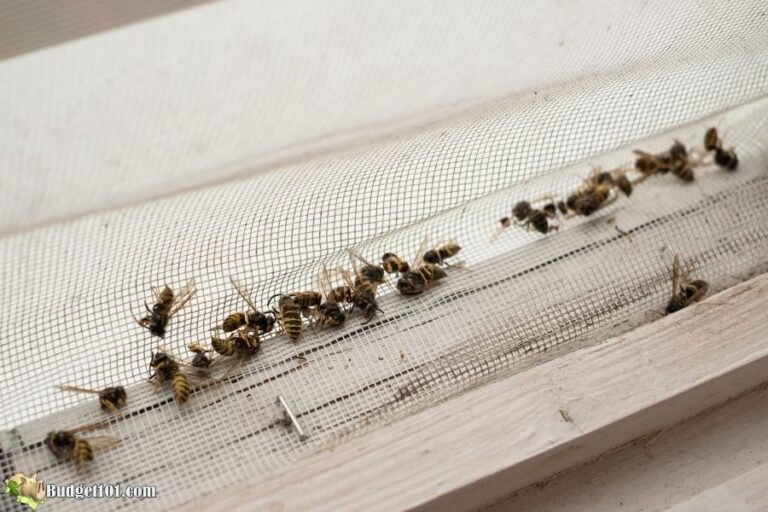 Nothing can spoil a family barbecue quicker than an angry wasp. Keep these unwelcome invaders from crashing your cookout with these simple tips. Get rid of wasps without expensive, harmful chemicals using products that you probably have in your pantry.

A cheap way to kill wasps is to spray the colony with soapy water in the evening when they have all returned to the nest. Fill a spray bottle with water and add a squirt of dish detergent.

Wasps love meat and sugary drinks and are attracted to the smell. So keep food covered when cooking outdoors. Wasps can and will sting when they feel threatened.

If you unwittingly get too close to their nest, you could end up with an angry swarm. Similarly, killing one wasp will attract others. So your best defense is to repel them in the first place. 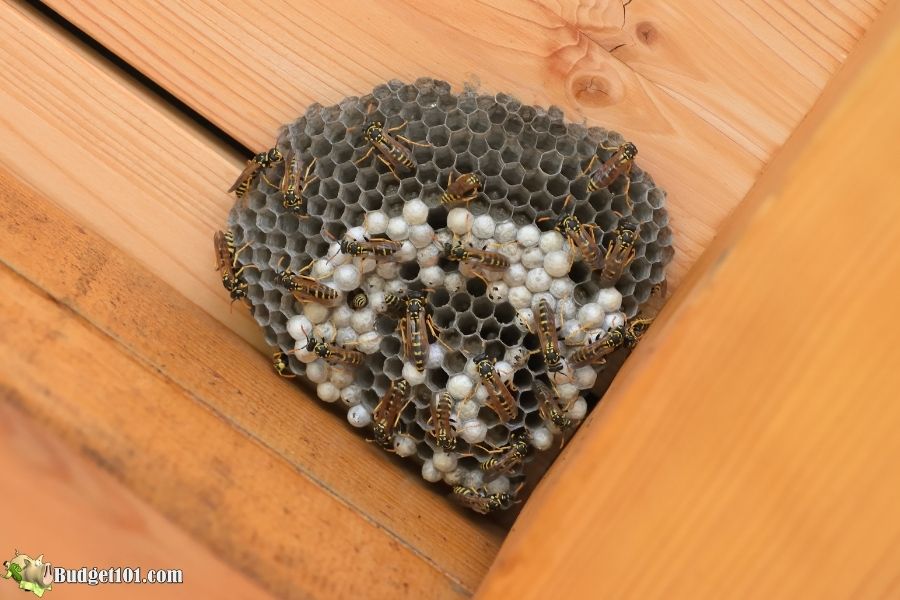 Wasps have a powerful sense of smell, and they dislike peppermint, lemongrass, and geraniums, to name a few. Here are some simple, effective ways to rid your yard of these pesky insects. 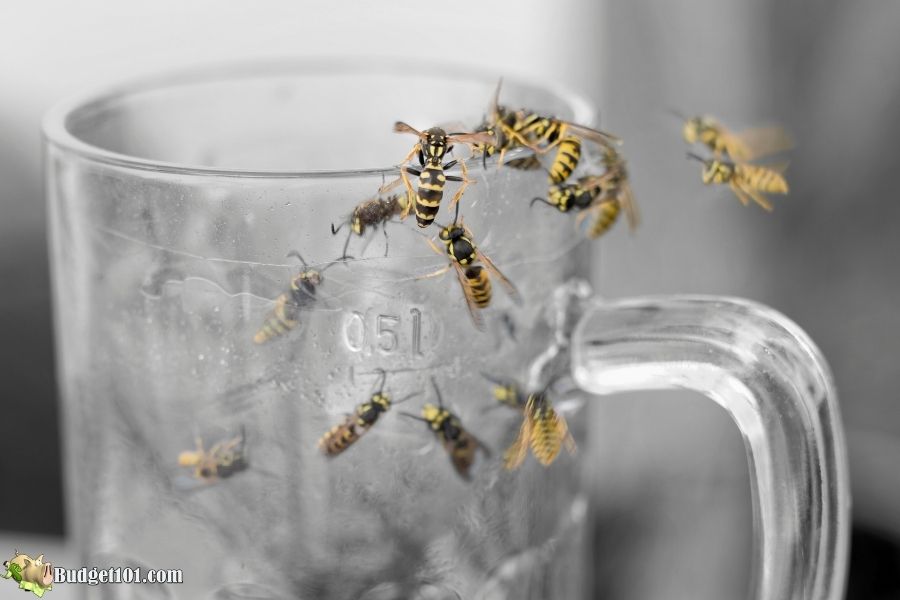 There are many ways to eliminate the threat of wasps, hornets, and other stinging insects around the home. Chemical sprays are effective but can be harmful to children, pets, and landscaping and are often quite costly.

The three best ways to kill wasps use products that are usually on hand, easy to mix and apply, and are very inexpensive. 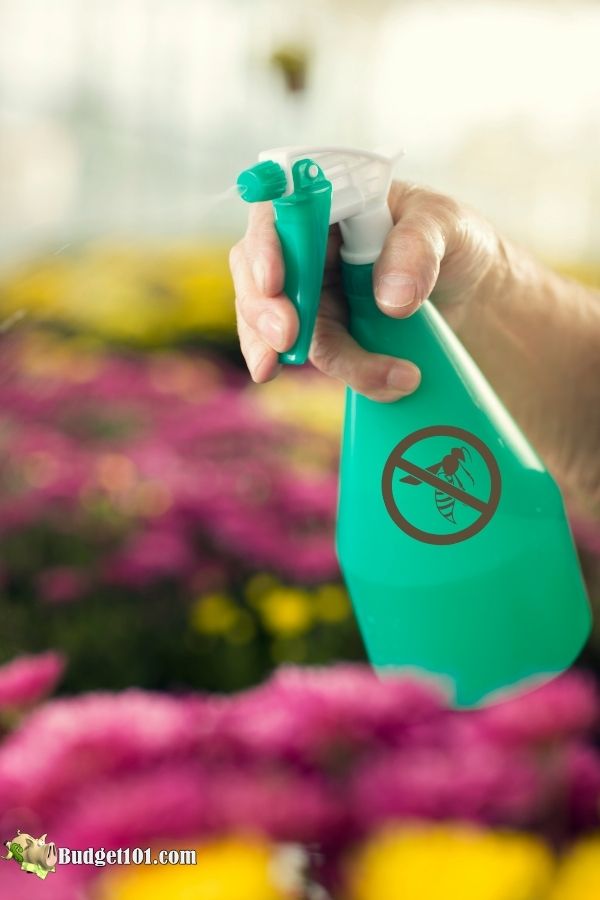 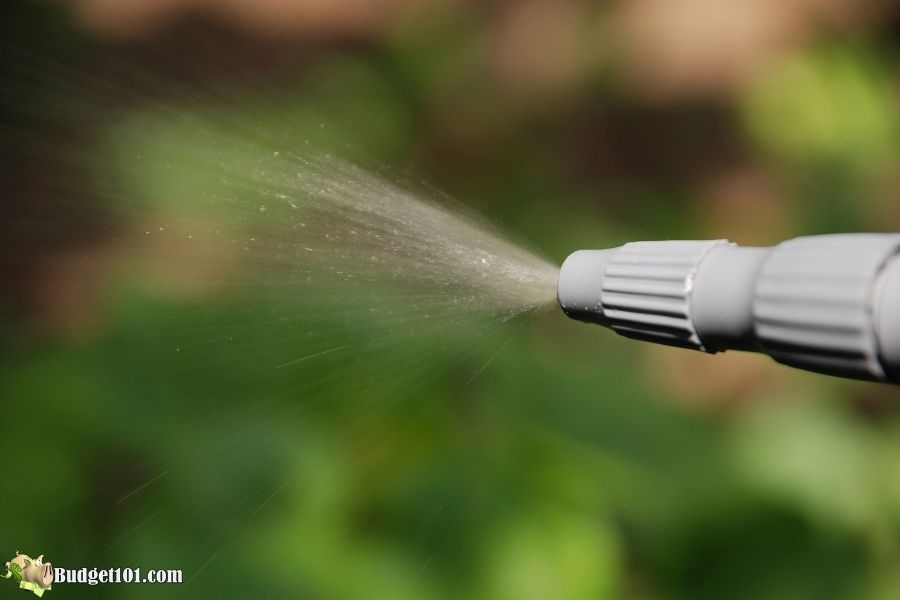 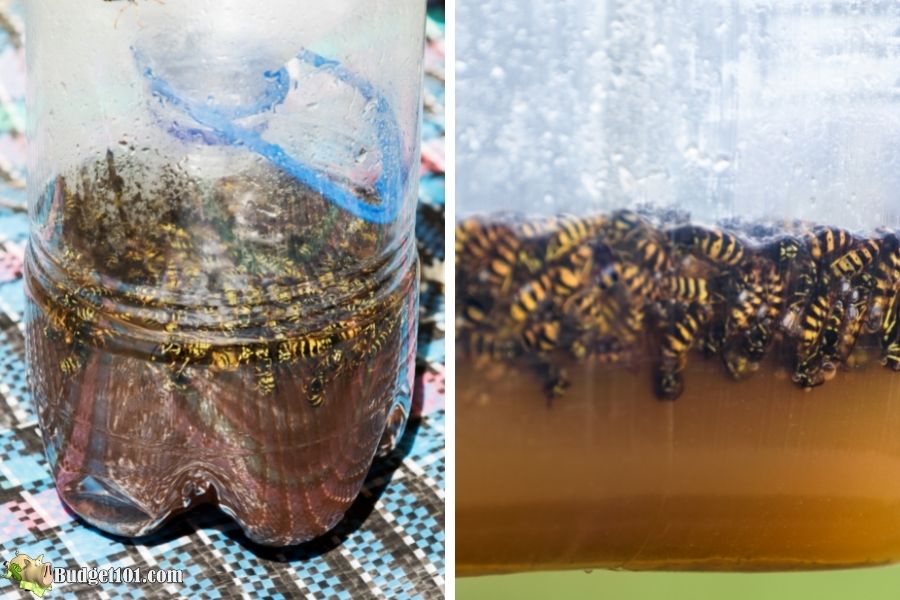 What is the Best Way to Get Rid of Wasps?

There are many proactive ways to discourage wasps from moving into your personal space. Soap and water, oddly enough, work best.

The reason soapy water works so well is that the detergent disintegrates the hard outer shell of the wasp, and the water causes them to drown. It is economical and environmentally safe.

Wasps have a great sense of smell, so keep food covered and wipe up spills promptly. They hate the smell of peppermint, lemon, and geraniums, so consider adding some or all to your picnic table and outdoor spaces. Essential oils, infusers, or potted plants add to the ambiance and do double duty to help repel pesky insects.

If you are lucky enough to have fruit trees on your property, you can reduce the instances of wasps feeding on fallen fruit by keeping them picked up. Also, don’t allow the fruit to ferment on the ground. 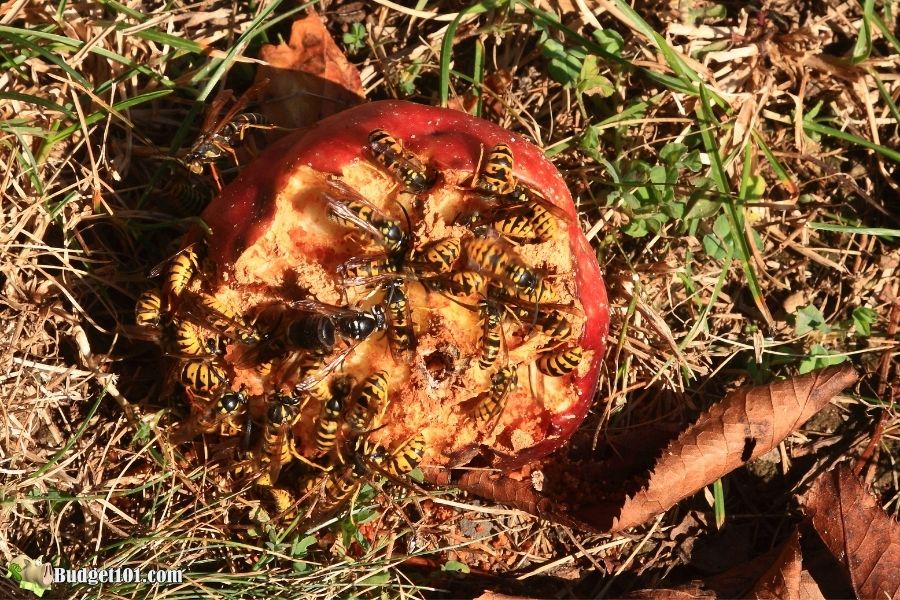 Fire has been used to destroy wasp nests, but be careful not to let it get out of control. You wouldn’t want to take the chance of burning your house down to get rid of a colony. Likewise, a fire isn’t a good idea near eaves, doorways, or entryways.

What do Wasps Hate Most?

We can’t presume to know precisely what these insects hate, but we do know that certain scents repel them. As mentioned above, we do know that they dislike peppermint and lemons. They also have an aversion to vinegar, sliced cucumbers, and cloves.

Consider an herb garden near patio areas or in window boxes on porches and sills and plant basil, spearmint, eucalyptus, and thyme. Citronella is a natural repellent, too. Try placing some citronella candles around. Sprinkle some dried bay leaves in the area. 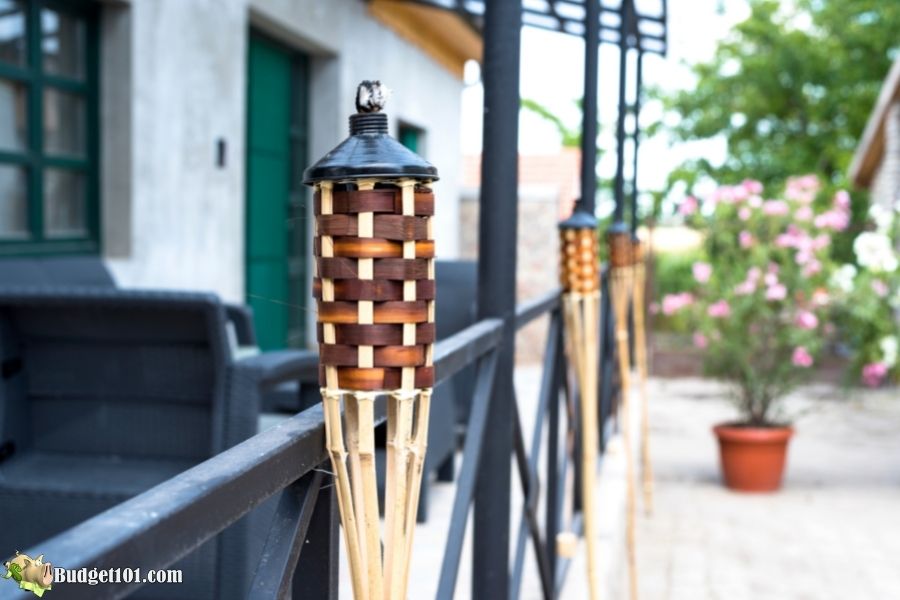 Some ornamental plants will attract wasps, so don’t plant white and yellow flowers near the doorways and outdoor living spaces. Geraniums, with deep red blooms, will chase them away. 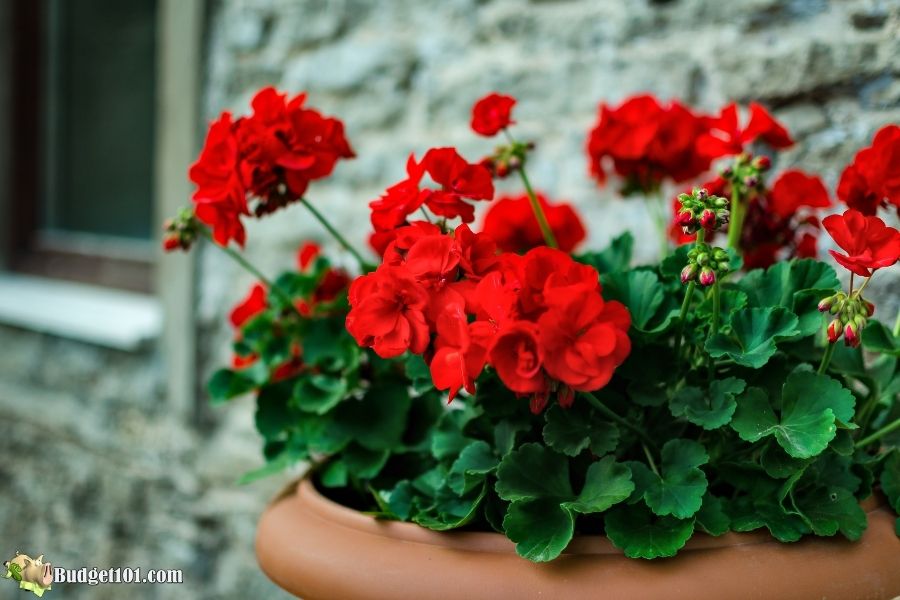 Interestingly, this works due to wasps’ aversion to dark colors, which they perceive as a threat. While they can’t truly see colors, brown, black, and red tend to keep them at bay, while lights and whites, including tan and yellow, attract them. Wasps also hate getting wet and will take refuge during rainy days wherever they can, in your house, garage, or under the eaves.

Bleach and water: Spraying a wasp nest with bleach and water may kill some wasps, but it is not fast-acting and will need a second or third application. You may just end up making them agitated and prone to swarm. Bleach is also messy and strong-smelling so if you have something else on hand, use that.

Water: Simply spraying water on a wasp nest is not a good idea. You may be able to kill a few, but the rest of the colony will be furious and prone to attack.

Dryer Sheets: Some claim that placing fabric softener sheets near nests will drive them out, but there is no scientific evidence to back this up. Putting dryer sheets in your pocket has been suggested as a way to repel mosquitoes, but this has not been proven.

It is not uncommon for mail carriers to put dryer sheets in customer mailboxes to help deter nest-building.

Fire: As noted, fire can kill wasps but is too dangerous. Wasps mostly build their nests in trees, doorways, eaves, and inside of your walls since these areas make them feel secure. These locations also make using fire very impractical. Even a ground-nesting colony cannot be effectively removed by burning.

Fake Nests: Another popular idea is to place paper lunch bags shaped into a cylinder to fool wasps into thinking other wasps are already in the area since they are territorial insects. This ploy does not fool wasps. Some of the more inspired fake nests, like those cute crocheted ones, probably won’t do much good.

Painting Porch Ceilings: Many a southern home features a special blue paint on the ceilings of front porches that are thought to discourage wasp nest building. Known as “Haint Blue,” it is a lovely shade but probably does little to deter wasps. 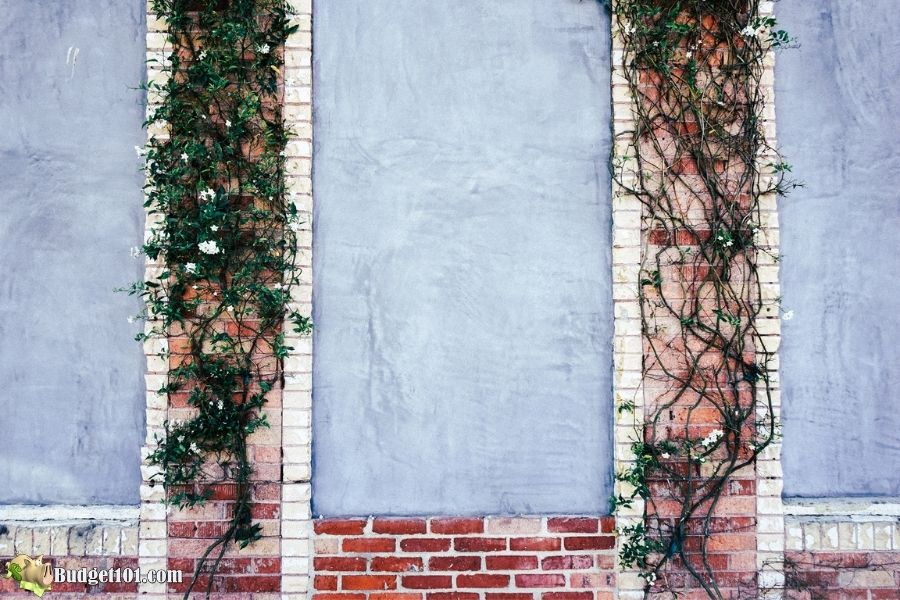 The origins aren’t clear, but many believe it originated in New Orleans over 200 years ago and was to dissuade evil spirits and ghosts from entering your home. Unfortunately, it’s also not known if it prevents these unwelcome visitors from making themselves at home in our home.

Whole Cloves: Many social media posts have touted the effectiveness of pressing whole cloves into halved lemons or limes as a natural wasp repellent. While some still swear by it, it’s effectiveness has been disproven. 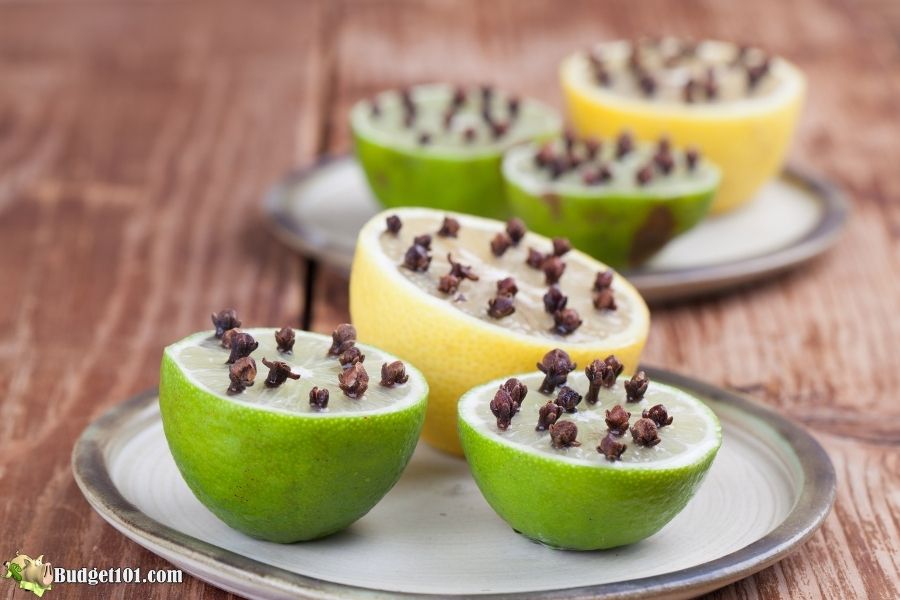 Why do wasps follow you? Chances are they are attracted to your perfume. Flowery, floral, sweet scents will entice insects to investigate, so limit the use of strong colognes and perfumes while enjoying the great outdoors.

What colors attract wasps? Dark colors are perceived as a threat. Avoid wearing navy blue, black, brown, and dark reds outside. Instead, opt for lighter-colored clothing like white, khaki, tan, and beige.

Do wasps remember human faces? That disturbing notion is probably derived from studies that wasps can and do recognize and remember each other’s faces. However, it’s not known if they recall ours.
✔️ It is imperative that you never swat at a wasp that is flying around you. Doing so will cause them to release pheromones that will draw more wasps, increasing your chances of getting stung.

✔️ If a wasp lands on you, gently blow on the wasp to create a light wind. This will encourage the wasp to fly away, reducing your chances of getting stung.

✔️ Killing one insect attracts others. The killing of one wasp releases pheromones that detect a threat which will compel other wasps to seek you out.

✔️ Wasps rebuild their nests every year. Social wasp workers only live about three weeks, but the queen lives for a year and sometimes two. They are dormant in the winter. 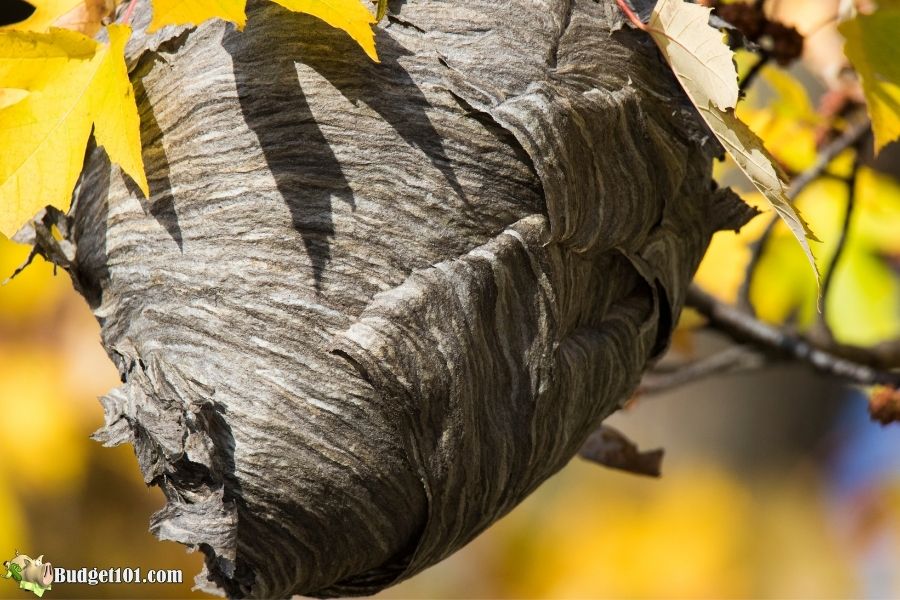 ✔️ Wasps are easily distinguishable from Honey Bees in several ways. Bees are cute and fuzzy; wasps are neither. Bees can be found inside flowers, while wasps are more likely to hide out under the leaves.

✔️ Wasps have many natural enemies; their predators include birds, bats, and dragonflies, as well as praying mantis, centipedes, and bears.

✔️ Wasps do play a role in the insect world and are an essential part of the food chain. As such, if the nest is not a direct threat, it is sometimes wiser to let them be.

Love this handy guide of Natural Ways to Get Rid of Wasps Fast? Pin it!