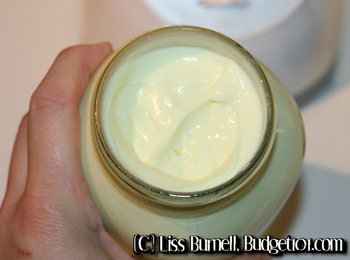 Here is an amazingly simple Do It Yourself detergent that doesn’t leave any residue on clothing, gets nearly every stain known to man out the first time around and smells clean and fresh- oh and did I mention that it costs about $1.76 for 128 loads of laundry? 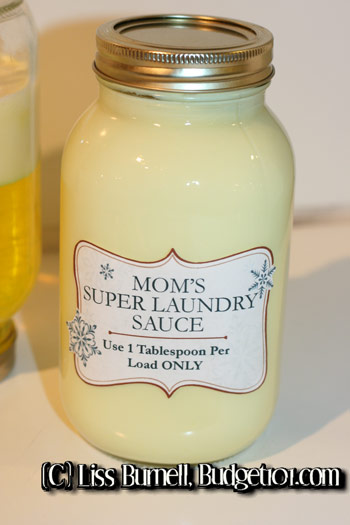 Since our teen son started working at a fast-food restaurant, this has become our most-loved detergent recipe. His clothing was so saturated with heavy french fry and onion ring grease scent that even washing them in TIDE didn’t take out the horrendous smell.

I whipped up a half-gallon of this detergent and washed his clothes while he was at school- he thought I’d gotten a new shirt from his boss at work! First time EVER that ALL of the smell finally came out of his clothes, without further ado – here is my Super Laundry Sauce recipe!

By the way, One Single tablespoon of soap does a whole load of wash! As with ALL household/Soap/Detergent/ Cleaner recipes, please take the time to read through the ENTIRE recipe before starting it. It will save you loads of hassle with a recipe that doesn’t set properly.

BEFORE YOU BEGIN- Check out our NO COOK VERSION HERE 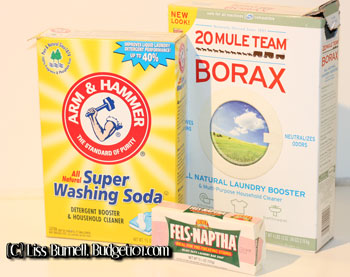 Follow the directions Carefully, adding the ingredients at the wrong time will result in a grainy textured detergent that will not dissolve well in the washer.

Put 4 cups of water in a large heavy saucepan over high heat. While that is heating, mix the borax and washing soda together in a bowl, mixing well, set aside. 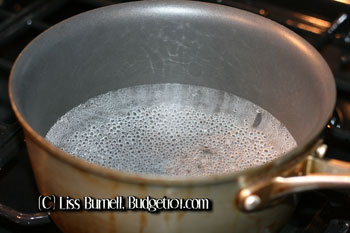 Grate the Fels Naptha- the easiest way to do this is to cut it into several smaller chunks and then run it through a food processor- otherwise, you can just grate it with a hand grater or shave it with a knife. 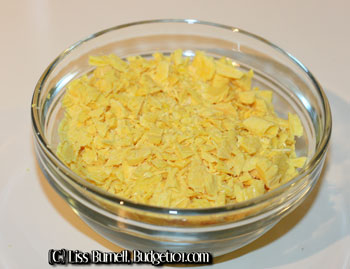 Add the freshly grated soap to the water in the saucepan, stirring almost constantly. Reduce the heat to medium, It will take approximately 10 – 15 minutes for the Fels Naptha to complete dissolve. If it takes longer, your heat wasn’t up high enough. Alternatively, you can melt the fels on the stove over low heat without water then add the water afterwards, stirring it in, as the original recipe called for. I find that it’s much easier to melt IN the water. Absolutely do NOT let this Boil over, or you’ll have a sudsy mess that you do NOT want to contend with!!

It should be a rolling, simmering boil where you must stir Constantly but it does not foam heavily or seem to “creep up” the saucepan. See the photo below- note the amount of “foam” – that’s all you should see. 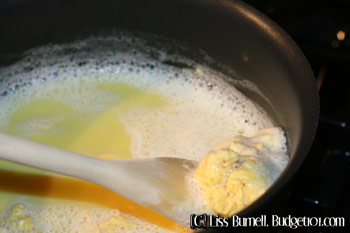 Once the Fels Naptha has completely melted, remove the pan from the heat and add in the Borax and the Washing Soda, stirring constantly until the powders are completely dissolved, this will take about 3-5 minutes. Do not under-stir or your soap texture will be very grainy rather than smooth. (You can fee the “graininess” on the bottom of the pan, once you can’t feel it, it’s incorporated fully!) 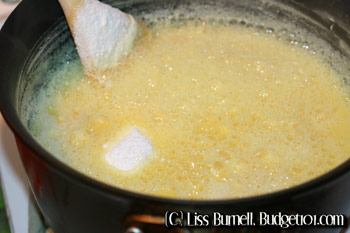 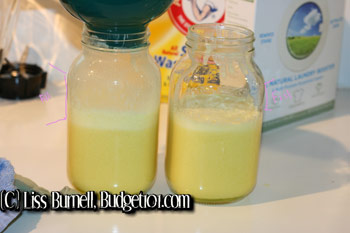 Add just enough water to bring the contents up to the “shoulders” or Rounded part of the jar, leaving approximately 1 ½ inches of headspace. 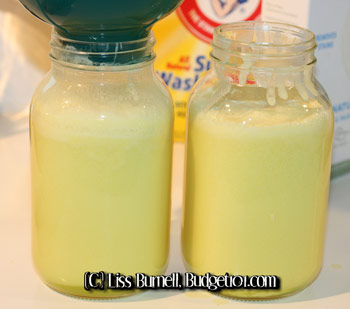 Put the lid on the jars and turn them UPSIDE DOWN and let them sit a few hours (about 4 – 5 hours). The reason for this is that the soap is going to Separate into layers while it’s resting and occasionally will form crystals on the bottom. Rather than waste these trying to scrape them off, in the next step we’re going to incorporate them easily! By the way, if you leave it overnight it will have a slightly grainier texture than if you whip it immediately after 4 hours. 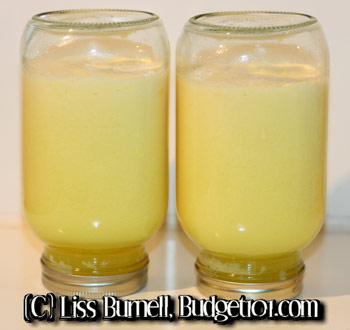 The Layers will separate after a few hours: 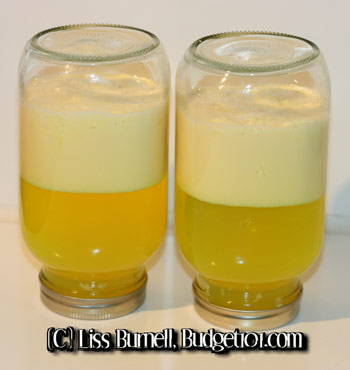 Then the bottom layer will become very, very thick, like so: 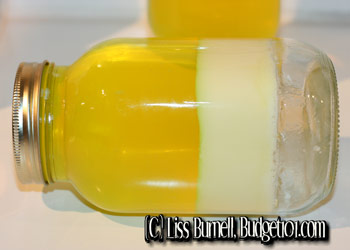 There are two ways to do this next step, depending on what you have for equipment. Here’s how I like to do it- unscrew the blade and bottom from your blender and screw them onto your regular mouthed mason jar containing all of your ingredients. 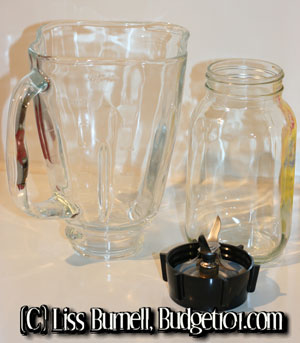 Place the entire mason jar on the blender and whip until smooth and creamy throughout, about a minute. Flip back over, unscrew the blender blade, attach a cover and seal. 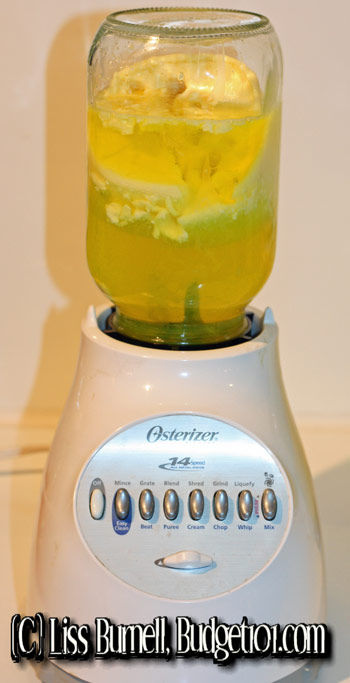 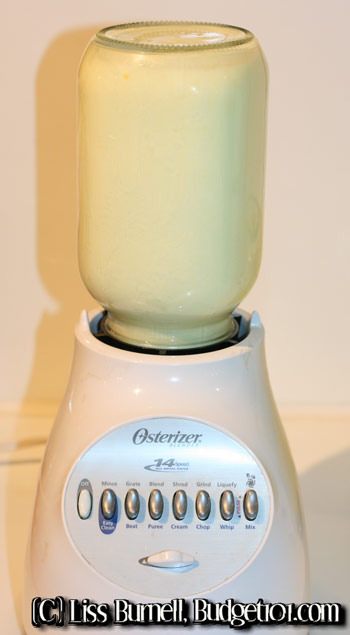 If you don’t have mason jars or a blender, pour the contents of your settled jar into a large bowl, be sure to scrape down any remaining from the jar to get it all. Using a Hand mixer, Whip the ingredients until light and fluffy and well blended. Transfer the ingredients back into the jar, cover, and store until needed. If you like, add a tsp of glycerin per jar.

To use, add 1 Tablespoon to a load of laundry in any type of machine, conventional, Front Loader, High Capacity & High Efficiency (HE), etc. Do not add the detergent to the “detergent compartment” but instead directly with the dirty clothes. The detergent is Smooth and creamy with the same Look and consistency of Mayonnaise. Be sure to label the jar to prevent accidental ingestion!!

Here is EXACTLY how I use our detergent:

Close the washer, start it, go away and do something else while the machine runs. Really, it’s that easy folks!

Tips and Tricks, Troubleshooting & Other Thoughts and experiences:

Do NOT use different sized jars, your soap will not set properly.

Before you Begin- Check out our Simplified NO COOK Version of this Recipe, aptly named
Super Laundry Sauce for Dummies, No Fail 7 minute Laundry Detergent