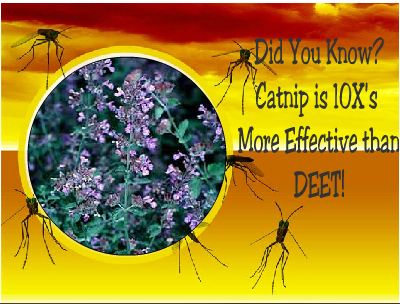 Did you know that Studies have proven that catnip repels mosquitoes more effectively than deet?! Here’s a simple way to make your own mosquito repellent to protect your family today! 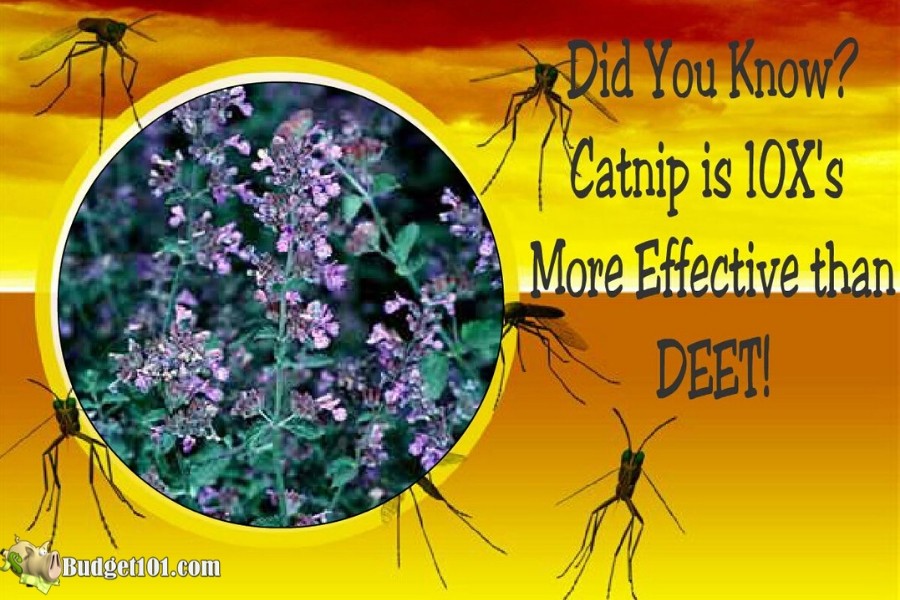 CHICAGO, August 27 — Researchers report that nepetalactone, the essential oil in catnip that gives the plant its characteristic odor, is about ten times more effective at repelling mosquitoes than DEET — the compound used in most commercial insect repellents.

The finding was reported today at the 222nd national meeting of the American Chemical Society, the world’s largest scientific society, by the same Iowa State University research group that two years ago discovered that catnip also repels cockroaches.

While they used so-called yellow fever mosquitoes (Aedes aegypti) — one of several species of mosquitoes found in the United States — Peterson says catnip should work against all types of mosquitoes.

Aedes aegypti, which can carry the yellow fever virus from one host to another, is found in most parts of the United States. Yellow fever itself, however, only occurs in Africa and South America, according to the Centers for Disease Control.

Vaccines and mosquito control programs have essentially wiped out the disease in the United States, although there have been isolated reports of unvaccinated travelers returning with the disease. The last reported outbreak in this country was in 1905.

Peterson put groups of 20 mosquitoes in a two-foot glass tube, half of which was treated with nepetalactone. After 10 minutes, only an average of 20 percent — about four mosquitoes — remained on the side of the tube treated with a high dose (1.0 percent) of the oil.

A rating of zero means half of the insects would stay on the treated side and a half on the untreated side. In Peterson’s tests, catnip ranged from +49 percent to +59 percent at high doses, and +39 percent to +53 percent at low doses. By comparison, at the same doses, DEET’s repellency was only about +10 percent in this bioassay, he notes.

Peterson says nepetalactone is about 10 times more effective than DEET because it takes about one-tenth as much nepetalactone as DEET to have the same effect. Most commercial insect repellents contain about 5 percent to 25 percent DEET. Presumably, much less catnip oil would be needed in a formulation to have the same level of repellency as a DEET-based repellent.

Why catnip repels mosquitoes is still a mystery, says Peterson. “It might simply be acting as an irritant or they don’t like the smell. But nobody really knows why insect repellents work.”

No animal or human tests are yet scheduled for nepetalactone, although Peterson is hopeful that will take place in the future.

If subsequent testing shows nepetalactone is safe for people, Peterson thinks it would not be too difficult to commercialize it as an insect repellent. Extracting nepetalactone oil from catnip is fairly easy, he says. “Any high school science lab would have the equipment to distill this, and on the industrial scale it’s quite easy.”

Catnip is a perennial herb belonging to the mint family and grows wild in most parts of the United States, although it also is cultivated for commercial use. Catnip is native to Europe and was introduced to this country in the late 18th century. It is primarily known for the stimulating effect it has on cats, although some people use the leaves in tea, as a meat tenderizer and even as a folk treatment for fevers, colds, cramps, and migraines.

A patent application for the use of catnip compounds as insect repellents was submitted last year by the Iowa State University Research Foundation. Funding for the research was from the Iowa Agriculture Experiment Station.

Joel R. Coats, Ph.D., is a professor of entomology and toxicology and Chair of the Department of Entomology at Iowa State University in Ames, Iowa.

Rinse the fresh herbs, then lightly chop them into pieces and put them in a clean glass quart jar. Cover them with the rice vinegar, seal the jar, and place in a dark spot for about 2 weeks. Shake the jar every other day. Strain into a spritz bottle, apply liberally to exposed skin areas, and around outdoor dining areas.
Refrigerate unused portions for up to 6 months. This recipe makes about 3 cups of spray. 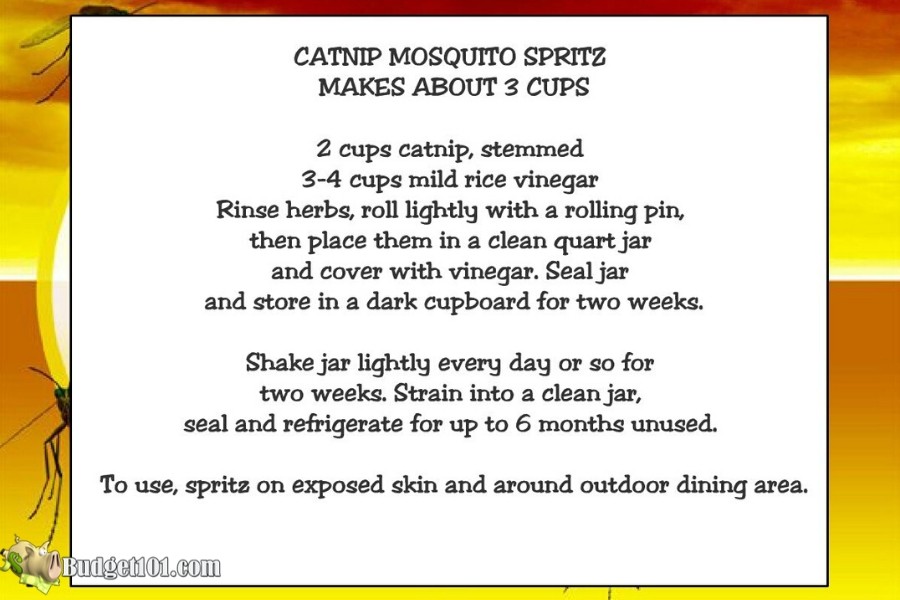 26 thoughts on “Make Your Own Mosquito Repellent”